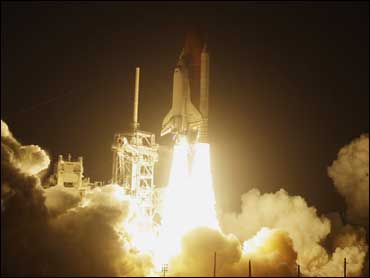 Seven astronauts traveled toward the international space station aboard space shuttle Discovery on Monday, while NASA debated whether the orbiting outpost will need to move aside to dodge part of an old Soviet satellite.

Space station astronauts had a close call last week with a small piece of orbiting junk, and NASA said Monday that debris from a satellite that broke apart in 1981 could come within about half a mile of the station early Tuesday.

NASA will decide later Monday whether to fire the space station's engines to nudge the complex out of the path of the debris.

The three space station residents had to move into their emergency getaway capsule last week for about 10 minutes because another piece of space junk came too close for comfort.

NASA has moved the space station out of the way of debris eight times in the past, most recently in August, according to NASA records.

A NASA spokesman said if the space station has to move, the shuttle will have to adjust its course slightly to be in position for docking on Tuesday.

The debris is from a satellite called Kosmos 1275, said NASA spokesman Bill Jeffs, who did not know the size of the piece.

Kosmos 1275 broke up somewhat mysteriously, said NASA orbital debris scientist Mark Matney. It may have crashed with another object that wasn't tracked, and it made a cloud of 310 pieces of debris that are slowly falling into a lower orbit, he said.

"There is now no threshold violation anticipated by this piece of space junk," Pat Ryan in mission control told CBS News space analyst Bill Harwood. "But because the target has seemed to be a moving one, the station teams are proceeding with their plans to be ready with a debris avoidance maneuver tonight and they are content to wait until at least the next round of tracking data ... before coming to a final decision," Ryan said.

The Kosmos debris is expected to make its closest approach to the station early Tuesday morning. But it was not immediately known how big the debris might be or how close it might come to the station, reports Harwood.

The shuttle launch Sunday followed five delays that caused Discovery's mission to be shortened by a day and canceled a planned spacewalk.

After a "first, quick look," Bill Gerstenmaier, NASA's associate administrator for space operations, said no apparent debris came off the external fuel tank during the launch. Debris has been a concern for NASA since a piece flew off the fuel tank and caused a breach in the wing of Columbia in 2003, dooming the shuttle and its seven crew members.

As insurance, Discovery's crew planned to spend a good part of Monday examining the shuttle's thermal protection system with cameras and sensors attached to a boom which is hooked to the shuttle's robotic arm.

Mission managers said Sunday that despite shortening Discovery's stay by a day, they would still be able to complete most of the tasks planned. The canceled spacewalk chores will be tackled by the space station crew after Discovery leaves.

"It's not a major setback to us," said Gerstenmaier. "We're able to accomplish everything we want."

That includes dropping off the space station's newest crew member: Japanese astronaut Koichi Wakata, who is replacing U.S. astronaut Sandra Magnus. From Tokyo, Japan's Chief Cabinet Secretary Takeo Kawamura said he was relieved by the successful launch after the delays.

Other tasks during the 13-day mission include installing the station's last pair of solar wings so the orbiting outpost can operate at full power. The crew will also deliver a replacement for a broken machine that turns urine into drinking water.

Problems with hydrogen valves kept the shuttle grounded for weeks in February and then a hydrogen leak during fueling prevented launch Wednesday. The valves worked as they should have and there were no leaks during fueling Sunday.