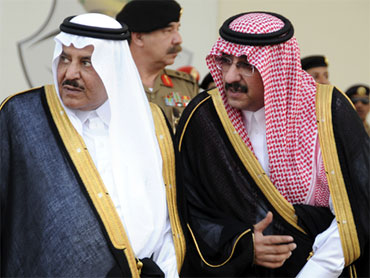 A suicide bomber lightly wounded a senior prince largely credited for Saudi Arabia's anti-terrorism campaign when he blew himself up just before going into a gathering of well-wishers for the Muslim holy month of Ramadan, the state news agency said Friday.

It was the first known assassination attempt against a member of the royal family since Saudi Arabia began its crackdown on al Qaeda affiliated militants eight years ago following the Sept. 11 terror attacks in the United States.

The militant who attacked the assistant interior minister, Prince Muhammad bin Nayef, late Thursday at the Ramadan gathering in Jiddah had previously expressed his intention to give himself up to the official, the Saudi Press Agency quoted the royal court as saying.

It is customary for senior members of the royal family to hold regular open gatherings where citizens can air grievances, seek settlement of financial or other disputes or offer congratulations.

Upon hearing news of the attack, King Abdullah swiftly headed to hospital, according to the agency. It said the prince, who is the son of Interior Minister Prince Nayef, was discharged from the hospital and nobody else was seriously injured.

The Interior Ministry has spearheaded the kingdom's aggressive campaign against terrorism, one that has intensified since militants first struck in the kingdom in May 2003. The country is the birthplace of al Qaeda leader Osama bin Laden and was home to 15 of the 19 Sept. 11 hijackers.

On Aug. 19, authorities announced the arrest of 44 suspected militants with al Qaeda links in a yearlong sweep that also uncovered dozens of machine guns and electronic circuits for bombs.

The 330 are believed to be among the 991 suspected militants that the interior minister has said have been charged with participating in terrorist attacks over the past five years.