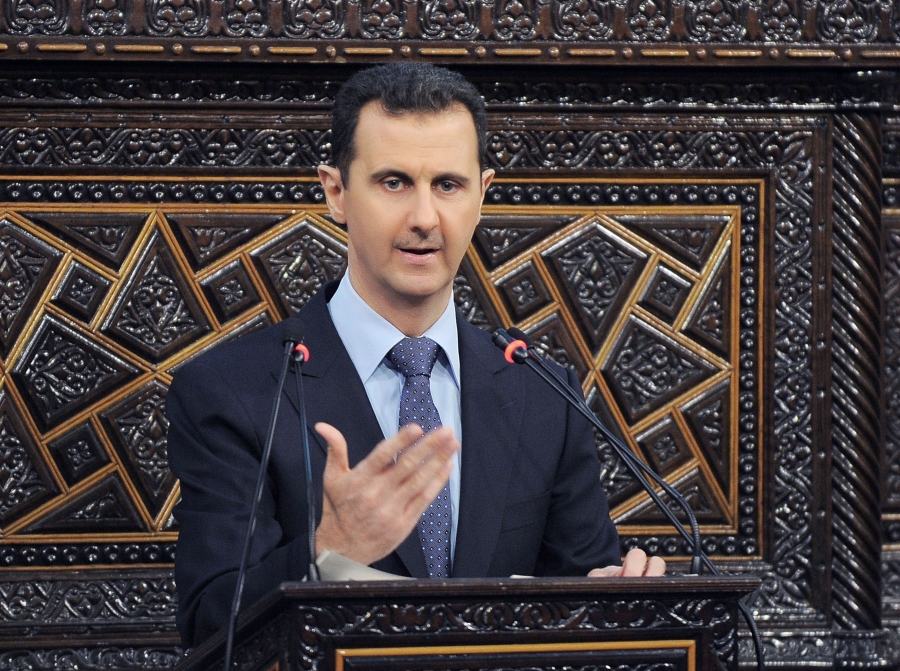 (CBS News) Syrian President Bashar Assad reiterated Thursday his hard line stance against the opposition movement seeking to drive him from power, vowing to "annihilate terrorists" in the nation which has been torn apart by an escalating civil war for more than a year.

Assad's iron grip on power - his family has run Syria since 1970 - is being increasingly tested by attacks closer to his power base in the capital city of Damascus, and rebel forces now control much of the northern Idlib province.

His response has been a brutal crackdown on opposition strongholds across the country, using the full force of his military, including heavy weapons, on residential areas where rebel forces are holed up. He is also accused of sanctioning - or at least not stopping - roving bands of loyalist militiamen known as shabiha, who've been accused of a series of civilian massacres in opposition towns and villages.

In an exclusive interview with Iran's IRIB television network, which was re-broadcast Thursday on Syrian State TV, Assad makes it clear he is not about to ease the assault.

U.N.: Syria violence as bad if not worse than before ceasefire
Assad: We live in "real state of war"
Complete coverage: The Arab Spring

"The responsibility of the Syrian government is to protect all of our residents. You have a responsibility to annihilate terrorists in any corner of the country," he told Iran's state-run network.

Assad's refusal to bow under huge pressure from the United States, Europe and many of his neighboring nations is facilitated almost entirely by the still-staunch support of Russia - a permanent, veto-wielding member of the United Nations Security Council.

Moscow, a long-time ally and vital economic partner of the Assad family, has blocked harsher sanctions against the regime at the U.N., but has continued to push for a resolution to the crisis based on a peace plan from international envoy Kofi Annan.

Annan's initial six-point ceasefire plan was agreed to on paper, but never made any progress in curtailing the daily violence in Syria - with the government and rebel forces trading blame for that failing. A U.N. monitoring mission which began patrolling Syria and assessing the violence as part of that ceasefire plan has indefinitely suspended operations, citing conditions too dangerous for their unarmed teams.

On Saturday, diplomats from the U.S. and other major powers will meet in Geneva to try and convince Russia to accept a new transition-of-power plan from Annan, which would see Assad step aside and a new unity government take over.

Reuters reports, however, that Russia proposed changes Thursday that would remove that key stipulation - Assad handing over power - from the plan.

Moscow insists the U.S. and other Assad foes have refused to acknowledge the Syrian rebels' role in prolonging the violence, and Foreign Minister Sergey Lavrov has said the onus should be on the opposition to join talks with Assad, not for Assad to step down.

Russia: Regime change in Syria not on the agenda

Annan, speaking ahead of preparatory talks in Geneva on Friday, sounded hopeful in spite of the looming showdown between Moscow and the U.S.

"I think we are going to have a good meeting tomorrow," he told Reuters TV. "I am optimistic."

Annan seems to be pinning his optimism on the hope that a plan that does not explicitly ban Assad from leadership - but that bans anyone whose participation could be seen as divisive - can be agreed to. As Assad's government is accused of killing more than 10,000 people in its crackdown, the implication would be clear.

Assad, meanwhile, told Iranian TV on Thursday that his government "will not accept any non-Syrian, non-national model, whether it comes from big countries or friendly countries. No one knows how to solve Syria's problems as well as we do."

Even if Assad's words are to be dismissed as empty rhetoric buoyed by a bubble of Russian support, there's no clear indication yet that Russia is willing to back down from its position and get behind a plan that calls for him to hand over power - regardless of how carefully it is worded.

And the increasingly well-armed and effective opposition has made it clear - as recently as Thursday - that any plan which leaves Assad in a position of power is not a plan they're interested in endorsing.