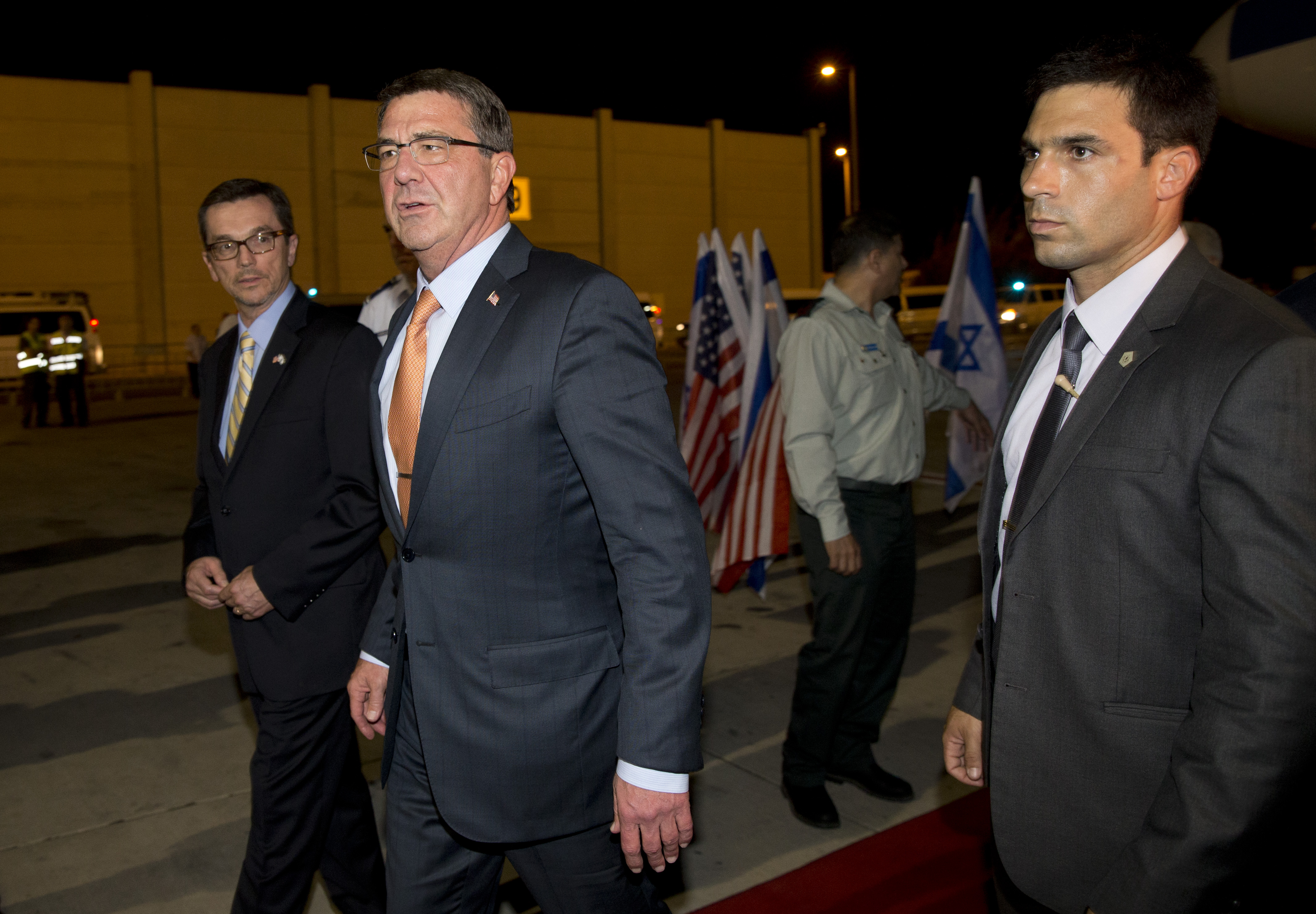 TEL AVIV, Israel -- U.S. Defense Secretary Ash Carter said Sunday he has no expectation of persuading Israeli leaders to drop their opposition to the Iran nuclear deal, but will instead emphasize that the accord imposes no limits on what Washington can do to ensure the security of Israel and U.S. Arab allies.

"Our ability to carry out that strategy is unchanged," Carter told reporters aboard his plane en route to Tel Aviv.

The Obama administration reserves the right to use military force against Iran if necessary, he added, although the nuclear deal is intended to preclude that by resolving the issue diplomatically.

Carter is scheduled to meet with Israeli Defense Minister Moshe Yaalon on Monday and with Prime Minister Benjamin Netanyahu on Tuesday before traveling to Saudi Arabia and Jordan to consult on the implications of the Iran deal and to assess progress in the regional campaign against the Islamic State of Iraq and Syria (ISIS). One of the bases used for U.S.-led training and arming of moderate Syrian rebels is in Jordan, and the Jordanian air force has carried out strikes against ISIS militants in Syria. One Jordanian pilot was captured and killed by the militants.

Netanyahu has been harshly critical of the Iran nuclear deal, asserting that it clears the way for Iran to build nuclear weapons that would threaten Israel's existence and ultimately diminish U.S. and global security.

"I'm not going to change anybody's mind in Israel," Carter said in the interview. "We can agree to disagree."

In his remarks, Carter repeatedly mentioned that the Iran deal places no limitations on the U.S. defense strategy or its military presence in the Middle East, which includes warplanes, an aircraft carrier and tens of thousands of troops. He gave no indication, however, that the Pentagon plans immediate moves to bolster that presence, which is anchored by the Navy's 5th fleet headquarters in Bahrain, an air operations center in Qatar and a military headquarters in Kuwait running the war against the Islamic State in Iraq and Syria.

In the interview, Carter previewed the message he will convey to Israel, Jordan and Saudi Arabia on behalf of President Barack Obama, who already has called a number of Mideast leaders to reaffirm U.S. support and to explain the Iran deal.

"This is a good deal," Carter said. "It removes a critical element of danger, threat and uncertainty from the region," and does so in a way that can be verified not only by the U.S. but by the international community.

Asked whether he thinks the Iran accord makes it more likely that Israel will launch a pre-emptive military strike on Iran, Carter noted that the U.S. has discussed military options with Israel for a number of years.

"One of the reasons this deal is a good one is that it does nothing to prevent the military option - the U.S. military option, which I'm responsible for" and which will be improved and preserved, he said.

The U.S.-Israel defense relationship has deepened in recent years, even as tensions between the two over how to contain Iran's nuclear program has grown.

The U.S. has invested hundreds of millions in an Israeli air defense system known as Iron Dome, designed to shoot down short-range rockets, mortars and artillery shells fired into northern Israel from southern Lebanon and into Israel's south from the Gaza Strip. The U.S. has worked with Israel on anti-missile systems and a wide range of other defenses. Two years ago the Pentagon committed to providing advanced radars for Israel's fleet of fighter jets and KC-135 refueling aircraft, and making Israel the first country to buy the V-22 Osprey hybrid airplane-helicopter.

Just two months ago Washington announced a $1.9 billion arms sale to Israel for a range of missiles and bombs, including bunker busters that can penetrate reinforced defenses to reach underground targets. Not included is the Pentagon's biggest bunker buster bomb.

Israeli officials insist they are not prepared to discuss American "compensation" for the Iran deal, saying that would imply acceptance of the accord. Israel believes there are loopholes in the deal that will allow Iran to emerge as a nuclear power eventually.

"Everybody talks about compensating Israel," Netanyahu said Sunday on ABC's "This Week."

"I guess the question you have to ask yourself is, if this deal is supposed to make Israel and our Arab neighbors safer, why should we be compensated with anything?"

The U.S. and Israel have been holding talks on renewing a 10-year defense pact set to expire in 2018. Under the current deal, Israel receives about $3 billion in military aid from the U.S. each year. That number is likely to increase when the deal is renewed, and possibly before then.

Obama has indicated he is open to new ways of improving Israeli security, but he has played down the idea that ending economic penalties on Iran will drastically alter the balance of power in the region.