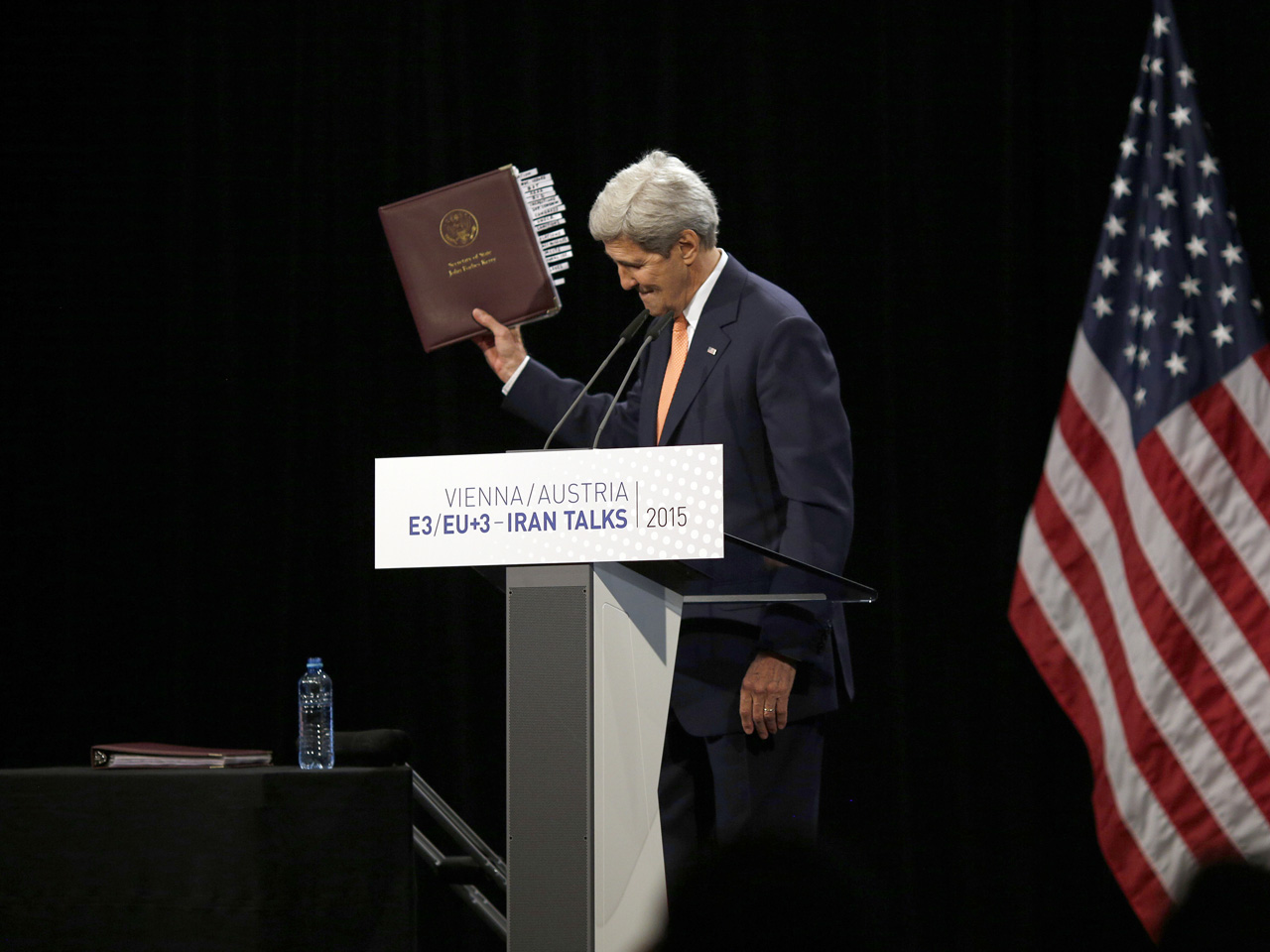 VIENNA -- At 3:00 a.m. Tuesday morning, Secretary of State John Kerry and Iranian Foreign Minister Javad Zarif hammered out the final language of the 100-page Iran nuclear agreement. Kerry spoke to President Obama by phone around midnight as he worked through the final dispute. Until early Tuesday, the talks had been tripped up by an argument over exactly when to peel back the ban on Iran's ability to buy and sell conventional weapons and missiles.

Senior Obama administration officials describe the compromise this way: the U.S. will maintain its arms embargo on Iran, but the U.N. ban on conventional weapons will be peeled back within five years. Within eight years, the ban on missile technology will be lifted. During this time, weapons inspectors at the International Atomic Energy Agency (IAEA) will be verifying that Iran is following through with what it has pledged to do under this deal.

T‎he U.S. and world powers known as the P5+1 reached a deal to freeze Iran's nuclear development for the next decade and disassemble some key suspect nuclear sites in exchange for gradual sanctions relief that rolls out as Iran complies with a multi-step process.

Two-thirds of Iran's centrifuges will be removed. About 19,000 are installed today, and Iran will, under the deal, reduce that number to to 6,104, with only 5,060 of these enriching uranium for 10 years. Also, Iran's stockpile of enriched uranium will be destroyed. These elements remain the same as what was previously announced in the April framework in Lausanne, Switzerland.

Senior Obama administration officials say that Iran has committed not to undertake development of a nuclear weapon. The U.S. believes that it reached its goal of guaranteeing that Iran's breakout - the time it takes to acquire enough fissile material for a weapon - will be one year. The U.S. is confident that this guarantee will be in place for a decade.

The U.S. says that Iran has agreed to allow IAEA weapons inspectors access to suspect nuclear facilities under rules known as the safeguard agreement of the Additional Protocol. They do not get automatic access to military sites but can get something called "managed access." If the IAEA can make a case that it needs to search a military installation, it can ask for access within days.

The U.S. believes that it is taking away the likelihood of a covert nuclear facility. The IAEA will install 24 hour cameras but they will not be beamed back in real time. There will be electronic seals on materials and, for the first time anywhere in the world, there will be online enrichment measurements used which will tell inspectors what type of enrichment is occurring.

The IAEA will have increased presence in Iran and an undisclosed additional number of inspectors and facilities. The U.S. believes it can ensure Iran will not deny IAEA inspectors access. They will not allow in American inspectors, however, because Iran has only agreed to allow inspectors from countries with whom they have diplomatic relations.

If Iran violates the deal, the U.N. can "snapback" the existing sanctions, that is, snap the sanctions back into place. This would happen through a U.N. vote that requires approval of continued sanctions relief. The U.S. has a veto.

Some centrifuges will still spin at Fordow but this will be for stabilized isotope production for medical purposes. The Russians will help them make the necessary conversions to the facility, and Iran will pay for this.

The Arak reactor - a heavy water facility that could be used to produce weapons grade plutonium - will be converted, and its core will be ripped out. If it were allowed to continue to operate, it would be capable of producing one or two weapons' worth of weapons-grade plutonium each year. Iran will also pay for an international partnership to redesign and rebuild the facility.

A new part of the agreement says that the IAEA will monitor and account for the heavy water. There will be seals and cameras installed. The technology used will be determined by the IAEA, and this has to be done before the sanctions are rolled back.

No date has been set for sanctions relief for Iran. It will take place when Iran complies with the steps laid out in the agreement, such as removing centrifuges from Fordow and allowing the IAEA set up monitoring equipment and access. Then the IAEA will report to the world powers and the U.N. once this has been completed, and that will trigger sanctions relief.

This structure provides incentive for Iran to complete the steps as quickly as possible. A senior Iranian official said Tehran hoped to start this process within weeks but provided no timeline. One U.S. estimate is that it could take as long as six months to take the first few steps.

The economic and financial sanctions - including a U.S. and E.U. oil embargo - will be lifted as Iran complies with terms and as IAEA weapons inspectors verify their compliance.

When the IAEA verifies that Iran has taken these steps, all of the existing United Nations Security Council (UNSC) resolutions that cut Iran off from the international community will be terminated. Another UNSC resolution that addresses nuclear-related transfers, missile technologies, ballistic missile technologies and arms will be in place for a period of time.

The Iran agreement will now go to the United Nations Security Council to make it enforceable under international law, and the discussion and vote could occur as early as next week, CBS News' Pam Falk reports. Congress will also get 60 days to scrutinize and review the deal before holding an up-or-down vote on the deal, although this vote is largely symbolic. President Obama has threatened to veto any bill that would block implementation of the deal.

Iran will remain locked out of the U.S. financial system and an existing U.S. ban on arms sales will continue.