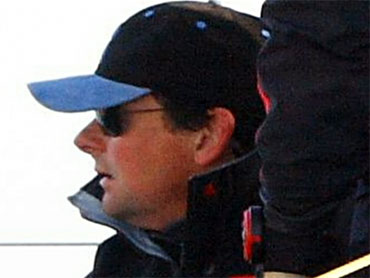 Just when it seemed Gulf residents couldn't get any more outraged about the massive oil spill fouling their coastline, word came Saturday that BP's CEO was taking time off to attend a glitzy yacht race in England.

Tony Hayward's latest public relations gaffe didn't sit well with people in the U.S. who have seen their livelihoods ruined by the massive two-month oil spill.

"Man, that ain't right. None of us can even go out fishing, and he's at the yacht races," said Bobby Pitre, 33, who runs a tattoo shop in Larose, La. "I wish we could get a day off from the oil, too."

Dear Tony Hayward: You Do Not Have Your Life Back (Commentary)

As social networking sites like Twitter and Facebook lit up with anger, BP spokespeople rushed to defend Hayward, who has drawn withering criticism as the public face of his company's halting efforts to stop the worst oil spill in U.S. history.

Robert Wine, a BP spokesman at the company's Houston headquarters, said it's the first break Hayward has had since the Deepwater Horizon rig exploded April 20, killing 11 workers and setting off the undersea gusher.

"He's spending a few hours with his family at a weekend," Wine said Saturday. "I'm sure that everyone would understand that."

Not Mike Strohmeyer, who owns the Lighthouse Lodge in Venice, on Louisiana's southern tip, who said Hayward was "just numb."

"I don't think he has any feelings," he said. "If I was in his position, I think I'd be in a more responsible place. I think he should be with someone out trying to plug the leak."

Wine said Hayward is known to be keenly interested in the annual race around the Isle of Wight, one of the world's largest. It attracts more than 1,700 boats and 16,000 sailors as famous yachtsmen compete with wealthy amateurs in the 50-nautical mile course around the island.

Hayward was watching his 52-foot yacht "Bob," made by the Annapolis, Md.-based boatbuilder Farr Yacht Design. It has a list price of nearly $700,000.

The outing is one of a series of missteps by Hayward in recent weeks. He suggested to the Times of London that Americans were particularly likely to file bogus claims over the spill, then later told residents of Louisiana that no one wanted to resolve the crisis as badly as he did because "I'd like my life back."

Even the British press, much more sympathetic to the company's plight, has expressed disbelief at its media strategy.

"It is hard to recall a more catastrophically mishandled public relations response to a crisis than the one we are witnessing," the Daily Telegraph's Jeremy Warner wrote Friday.

That was before news about the yacht race broke but after the chief executive made his appearance before a U.S. House investigations panel in which he dodged question after question, claiming he was out of the loop on decisions surrounding the well that blew when the Deepwater Horizon exploded.

President Barack Obama's chief of staff, Rahm Emanuel, called Hayward's decision to attend the yacht race a public relations fiasco and told ABC's "This Week," that Hayward had "got his life back."

"I think we can all conclude that Tony Hayward is not going to have a second career in PR consulting," he said in an interview taped Saturday.

Mr. Obama has also struggled to counter criticism of how his administration has handled the disaster. Up to 120 million gallons of oil has already gushed into the Gulf.

Crude has been washing up from Louisiana to Florida, killing birds and fish, coating delicate marshes and wetlands and covering pristine beaches with tar balls.

A pair of relief wells that won't be done until August is the best bet to stop the massive spill. By late June, BP hopes a newly expanded containment system can keep nearly 90 percent of the flow from the broken pipe from hitting the ocean.

But the buzz Saturday on social networking sites like Twitter and Facebook was all about Hayward's yacht outing, with many noting that Gulf residents want their lives back too.

It was not clear whether Hayward took part in the race, which he attended with son, or was just a spectator. His boat finished fourth in its class. It often costs tens of thousands of dollars (pounds) to equip a yacht for a race as competitive as the Isle of Wight.

Meanwhile, environmentalists and local officials along the Gulf were infuriated by Hayward's weekend plans.

"I'm glad Mr. Hayward is on a yacht, because he certainly hasn't been helping us," said Robert Craft, the mayor of Gulf Shores, Ala. Officials on the Alabama coast estimate tourism is down about 50 percent because of the spill.

Questions remained about whether Hayward is still in charge of the cleanup effort. BP Chairman Carl-Henric Svanberg seemed to suggest Friday that he was being withdrawn from the front line of the response.

"It is clear that Tony has made remarks that have upset people," Svanberg told Sky News television, adding that Hayward was "now handing over" daily operations to BP Managing Director Bob Dudley.

But BP spokeswoman Sheila Williams said Svanberg was misunderstood and that only a transition to Dudley, an American with 30 years in the oil business, had begun.

"Hayward is very much in charge until we've stopped the leak," she told the AP on Saturday.

BP, Britain's largest company before the oil rig exploded, has lost about 45 percent of its value since then - a drop has alarmed millions of British retirees whose pension funds hold BP stock. Just this week, BP announced that it was canceling its quarterly dividend.