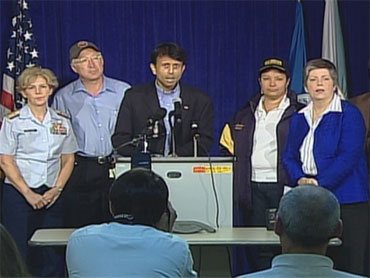 Oil from a massive spill in the Gulf of Mexico oozed into Louisiana's ecologically rich wetlands Friday as storms threatened to frustrate desperate protection efforts.

At a press conference this afternoon Homeland Security Secretary Janet Napolitano said President Obama has ordered the administration to use "every single available resource" in response to the oil spill that has spread through the Gulf of Mexico and has already reached ashore.

She also said an investigation has been ordered into the cause of the April 20 explosion on BP's Deepwater Horizon oil rig, in which 11 workers were presumed killed.

At the same press conference Gov. Bobby Jindal thanked President Obama for the help his administration has put forth in efforts to halt the spread of the massive oil spill. He said British Petroleum did not have adequate resources and capabilities to prevent the situation from worsening.

Jindal also said officials are doing everything they can to protect the state's fragile coastline from the oil slick, which is growing as oil spews from the seabed.

"These next few days are critical, and that's why we must do everything necessary and possible to protect our coast," said Jindal.

Interior Secretary Ken Salazar said he has asked other oil companies to offer their expertise to help BP resolve the crisis.

"We cannot rest, and we will not rest, until BP secures the well head and cleans up every drop of oil," Salazar said.

Boats patrolled coastal marshes early Friday looking for areas where the oil has flowed in, the Coast Guard said, and the state of Louisiana diverted thousands of gallons of fresh water from the Mississippi River to try to flush out the wetlands, though that effort was being hampered by wind.

The Defense Department has approved the use of two U.S. Air Force C-130 Hercules cargo planes to spray chemicals to help break up the Gulf Coast oil spill, Pentagon officials said Friday as they considered what more the military could do to assist.

The two C-130 Hercules cargo planes were staging for their flights at Lake Charles, La., after getting their orders Friday, Pentagon press secretary Geoff Morrell said. The planes were sent from the Youngstown Air Reserve Station in Ohio on Thursday.

Defense Secretary Robert Gates also was considering a request from Louisiana Gov. Bobby Jindal for the federal government to pay for 6,000 National Guard soldiers and airmen who were mobilized Friday to help with security, medical needs, engineering and other tasks.

The Louisiana National Guard has also mobilized for the fight, announcing Friday that it will send communication equipment, boats, all-terrain vehicles and other equipment to Orleans, Plaquemines, St. Bernard, Terrebonne, Lafourche and Jefferson parishes.

The Guard also is planning to send dump trucks and security vehicles to help deal with the oil spill.

Asked if he was confident the military was doing all it could to help, Morrell said: "We are confident that we are providing what has been asked of us and what is required of us at this point."

But he noted the situation continued to evolve as oil seeped into Louisiana's wetlands and threatened to push deeper inland.

"This is a dynamic, changing situation," Morrell said, and the military will help as needed.

The Navy said Thursday that it was sending booms, skimmers and contractors to and opening two of its bases in Mississippi and Florida as staging areas.

The help was provided under existing agreements the two services have with the Coast Guard for such efforts. U.S. Northern Command has officers on the coast working with the Department of Homeland Security to figure out what more may be needed, Morrell said.

The White House also put a hold on any new offshore oil projects until safeguards are in place to prevent rig explosions like the one that caused the spill.

The National Weather Service predicted winds, high tides and waves through Sunday that could push oil deep into the inlets, ponds and lakes that line the boot of southeastern Louisiana. Seas of 6 to 7 feet were pushing tides several feet above normal toward the coast, compounded by thunderstorms expected in the area Friday.

The bird is normally white with a yellow head and long, pointed beak but was covered in thick, black oil. Workers with Delaware-based Tri-State Bird Rescue and Research used Dawn blue dishwashing soap to scrub it.

Volunteers started arriving in Venice, La., though there wasn't much for them to do because the weather was so bad. About two dozen workers in hard hats and lifejackets were stuck on shore at a marina, lounging on small work boats, some laden with boom, ready to go to work. Some smoked cigarettes and spat sunflower seeds as they waited for assignments.

Volunteer Valerie Gonsoulin, a 51-year-old kayaker from Lafayette who wore an "America's Wetlands" hat, said she hoped to help spread containment booms to hold back the oil.

"I go out in the marshes three times a week. It's my peace and serenity," she said. "I'm horrified. ... I've been sitting here watching that NASA image grow and it grows. I knew it would hit every place I fish and love."

"We are making sure any leases going forward have those safeguards," said Mr. Obama at a White House Rose Garden event. He recently lifted a drilling moratorium for many offshore areas, including the Atlantic and Gulf.

Meanwhile, the Pentagon approved the use of two Air Force planes to dump chemicals on the oil spill, which civilian planes have already been doing.

The Navy also sent equipment for the cleanup, and Pentagon officials were talking with the Department of Homeland Security to figure out what other help the military could give.

President Obama reassured Gulf Coast communities that the federal government is "fully prepared" to meet its responsibilities to them as the spill gets worse.

The leak from a blown-out well a mile underwater is five times bigger than first believed. More than 200,000 gallons of oil a day are spewing from the site of the rig, which was operated by BP and owned by Transocean Ltd. It sank two days after the explosion.

The Coast Guard is working with BP to deploy floating booms, skimmers and chemical dispersants, and has set controlled fires to burn the oil off the water's surface.

The Coast Guard defended the federal response so far. Asked on all three network television morning shows Friday whether the government has done enough to push oil company BP PLC to plug the underwater leak and protect the coast, Coast Guard Rear Adm. Sally Brice-O'Hara said the response led by the Coast Guard has been rapid, sustained and has adapted as the threat grew.

Brice-O'Hara was also asked on ABC's "Good Morning America" about the possibility of dispersing chemicals about a mile beneath the surface to break up oil. She replied: "That is a technology that is in new stages. We are working closely with our scientific support from NOAA, and there will be careful scrutiny. But if it has applicability, which we think it does, we want to get that in place very quickly."

The oil slick could become the nation's worst environmental disaster in decades, threatening to eclipse even the worst oil spill in U.S. history, the Exxon Valdez, the grounded tanker that leaked 11 million gallons in Alaska's Prince William Sound in 1989. The sheen measured about 70 miles by 130 miles as of Thursday, and officials expected to update that figure Friday.

It imperils hundreds of species of fish, birds and other wildlife along the Gulf Coast, one of the world's richest seafood grounds, teeming with shrimp, oysters and other marine life.

"This is a very, very big thing," David Kennedy, of the National Oceanic and Atmospheric Administration, told The Associated Press about the spill. "And the efforts that are going to be required to do anything about it, especially if it continues on, are just mind-boggling."

Volunteers were preparing to help wildlife that might be affected. Oil clumps seabirds' feathers, leaving them without insulation - and when they preen, they swallow it. Prolonged contact with the skin can cause burns, said Nils Warnock, a spill recovery supervisor with the California Oiled Wildlife Care Network at the University of California-Davis. Oil swallowed by animals can cause anemia, hemorrhaging and other problems, said Jay Holcomb, executive director of the International Bird Rescue Research Center in California.

BP shares continued falling early Friday. Shares were down 2 percent in early trading on the London Stock Exchange, a day after dropping 7 percent in London. In New York on Thursday, BP shares fell $4.78 to close at $52.56, taking the fall in the company's market value to about $25 billion since the explosion.

The Coast Guard and BP have at least six remotely operated vehicles working to close an underwater valve meant to keep the oil from reaching the surface. Meanwhile, crews are drilling a relief well that will essentially suck the oil away from the original well, decreasing the pressure and slowing the leak, though that could take up to three months.

Louisiana Gov. Bobby Jindal declared a state of emergency and asked the federal government if he could call up 6,000 National Guard troops to help.