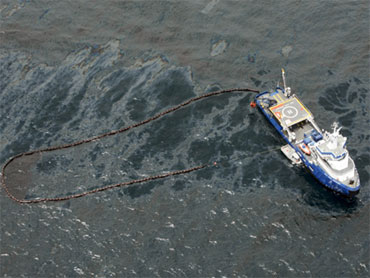 The White House announced today that it is sending three cabinet members to oversee the effort to control and clean up the spill, which is much worse than first thought. Liberal activists are pointing to the disaster as a reason for the president to reconsider his decision to open up the southern Atlantic coastline and some other areas to offshore drilling.

Assistant to the President for Energy and Climate Change Carol Browner emphasized today that no plans for new drilling have been established yet and that the president's decision was simply "the beginning of a process" to consider new plans over the next five years.

Asked if the White House might call for a pause in all offshore oil drilling, because of the incident, Deputy Secretary of the Department of the Interior David Hayes said, "everything is on the table."

White House Press Secretary Robert Gibbs said that Mr. Obama has expressed his concern over the spill and will be examining the cause while considering how it could impact the plans for new drilling.

"Could that possibly change his viewpoint? Well, of course," Gibbs said.

Like Browner, Gibbs emphasized there are no plans yet to actually start new drilling. Still, he said, "The president does believe we have to increase domestic production" because "there is no one thing that can reduce our dependence on foreign oil."

Gibbs told reporters that the situation is of "national significance." Mr. Obama is expected to address the incident this afternoon.