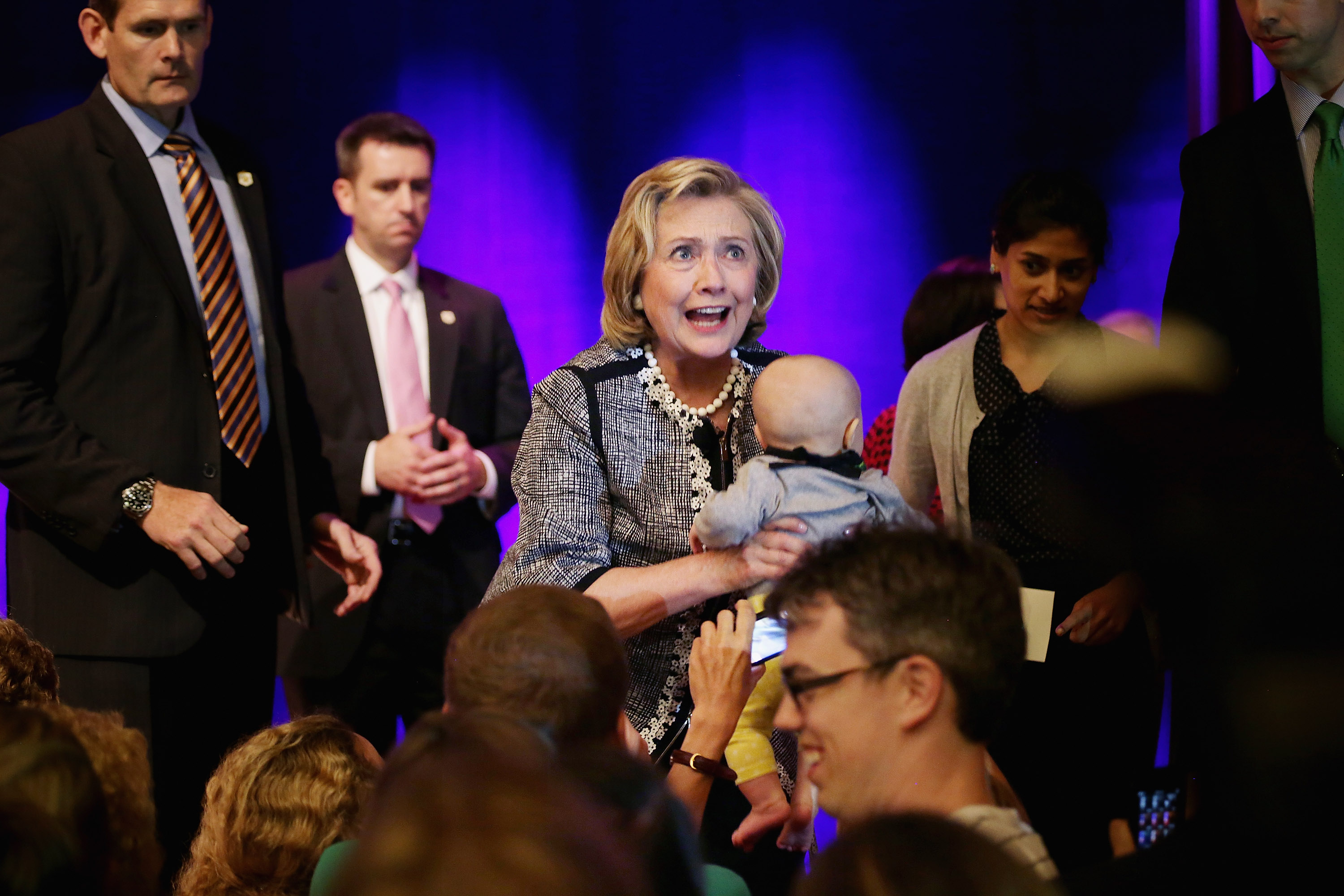 Hillary Clinton continues to hold an edge over potential 2016 Republican presidential rivals, according to a new Bloomberg News poll, but that edge is slowly dissipating as Clinton re-enters the political fray.

Fifty-two percent of Americans said they view Clinton favorably in the survey, down from 56 percent in March and 70 percent at the end of 2012, shortly before she stepped down as secretary of state.

Her declining favorability ratings have eroded Clinton's standing against prospective GOP challengers. Among likely voters in the poll, Clinton beats Gov. Chris Christie, R-N.J., 45 to 38 percent. In March, she held a 52 to 39 percent advantage over Christie.

"Hillary Clinton may be suffering from contagion from President Barack Obama's sinking scores," said pollster J. Ann Selzer, who conducted the survey for Bloomberg. "She is down across the board, even with groups that have been her most ardent supporters."

Mr. Obama's own favorability rating fell to 44 percent in the survey - the lowest number Bloomberg has recorded during his presidency.

The good news for Clinton, Selzer added, is that the decline in her favorability ratings "doesn't appear to affect her electability -- for now."

Bloomberg's poll surveyed 1,005 adults between June 6 and 9, and it carries a margin of error of plus or minus 3.1 percent.

Clinton embarked on a whirlwind media tour this week to promote the release of her memoir "Hard Choices," a chronicle of her experience at the State Department. The book signings and interviews have represented Clinton's most open step back into politics since she stepped down as the nation's top diplomat in early 2013.

Though she was greeted rapturously by overflowing crowds at many of the stops on her tour, she also ran into some trouble during her sit-downs with journalists.

First came a clumsy answer to ABC's Diane Sawyer, who asked about the Clintons' finances. Clinton said she and her husband, former President Bill Clinton, were "dead broke" when they left the White House in 2001 due to a pile of legal bills that eroded their savings.

Republicans savaged Clinton for the quote, painting her as out of touch. Clinton herself acknowledged that she could have been more "artful" in her choice of words. "That was then, this is now," she explained, saying she and her husband have been fortunate to enjoy a healthy income in recent years.

Then on Thursday, Clinton irritably rebutted NPR's Terry Gross after Gross implied she'd changed her position on same-sex marriage to suit the politics of the moment.

After the two disputed the charge for several minutes, Gross said she was merely trying to "clarify" Clinton's position, and Clinton fired back.

The interviews betrayed some rusty political instincts on Clinton's part after she's been largely out of the game for over four years. But at a book signing in Washington, D.C., Friday night she said it's been a liberating experience to speak freely.

"Maybe it's just the wonderful wealth of experience that I've now had. Maybe it's because I am totally done with being careful about what to say because somebody might think this instead of that," she said. "It just gets too exhausting and frustrating and it just seems a whole lot easier to just put it out there and hope people get used to it."

Clinton also addressed the growing violence in Iraq, where Islamist militants have captured several major cities in recent days, raising fears that Iraq's capital, Baghdad, might be next.

The former secretary of state called the latest developments "especially dangerous," but she said the U.S. can't assist the Iraqi government until leaders there demonstrate an appetite for political reform and inclusion.

"We certainly don't want to fight their fight because you'd be fighting for a dysfunctional, unrepresentative, authoritarian government and there's no reason on earth that I know of that we would ever sacrifice a single American life for that," she said as the audience applauded.