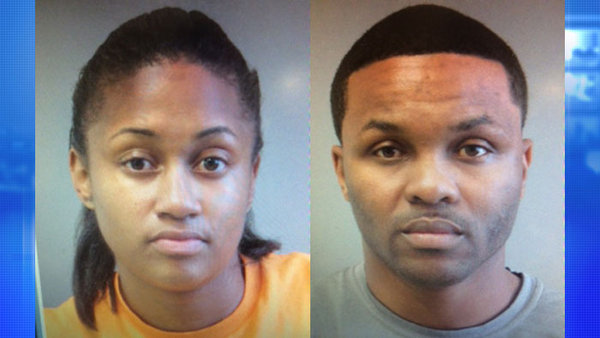 NEW ORLEANS - Two suspects have been arrested for the slayings of Lakeitha and Kenneth Joseph, the Reserve, La. couple bound at the feet and dumped into the Intracoastal Waterway in February, police said Wednesday.

The New Orleans Advocate reports Brittany Martin, 25, and Horatio Johnson, 37, surrendered to law enforcement after learning of warrants for their arrests. Martin and Johnson are residents of St. John the Baptist Parish.

Officer Hilal Williams, a police spokesman, said both suspects were booked as fugitives in St. John Parish and are awaiting transfer to Orleans Parish where they will be booked on two counts each of second-degree murder. It was not immediately known if either is represented by an attorney.

The Josephs were reported missing Feb. 19 after they failed to return a van they had borrowed from Kenneth Joseph's sister shortly before their disappearance. The motive for their killings remains unclear.

Lakeitha Joseph's father, Hewitt Williams, said he did not know either of the suspects, but he rejoiced at news of their arrests.

"I'm glad to see that the people who murdered my kid are finally going to face justice," he said. "My daughter is being missed real bad."

Both victims drowned, and investigators have said they were weighted down in the water by 30-pound kettlebells. Detectives believe the kettlebells were purchased at a Wal-Mart in Kenner, according to court records.

Store records revealed a suspicious $177 purchase made at 1 a.m. Feb. 19 for two 30-pound kettlebells, two fleece hooded sweatshirts, three pairs of "gripping gloves," some fishing line, blue utility rope, two pairs of shoes and a bottle of degreaser, according to a search warrant. The transaction was made with an American Express card in Martin's name.

A man and a woman were captured on store surveillance video buying the items. "The transaction was approved and verified with the signature of B. Martin," Detective Ryan Vaught wrote in an application for a search warrant.

Federal prosecutors last month charged a man accused of driving the borrowed van to Georgia after the murders and trying to wipe it free of fingerprints before abandoning it.