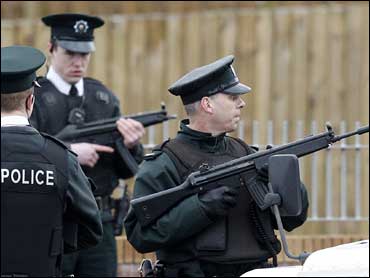 The Protestant and Catholic leaders of Northern Ireland mounted an exceptional display of unity against rising violence from Irish Republican Army dissidents - and vowed Tuesday to defeat hard-liners with the power of popular will.

Former IRA commander Martin McGuinness, who long hoped that slaying police officers would help him achieve his dream of a united Ireland, stood shoulder to shoulder with his Protestant partner atop the government, Peter Robinson, and Northern Ireland police commander Hugh Orde.

Police raided several homes in a nearby state housing project Tuesday and arrested a 17-year-old-boy and 37-year-old man on suspicion of involvement in 48-year-old Constable Stephen Carroll's slaying.

At the unprecedented joint appearance, McGuinness, whose Sinn Fein party has faced years of outside pressure to embrace British law and order, pledged his personal support to the English police chief. He demanded that his own police-loathing supporters abandon their traditional code of silence and expose the IRA dissidents in their Irish Catholic communities.

"I have to keep my nerve, and to appeal to my community to assist the police services north and south to defeat these people," McGuinness said of the dissidents who killed two British soldiers and a Carroll over the past three days - the first such killings in more than a decade.

"There is a duty on me, a responsibility on me to lead from the front, and I expect that people will follow," McGuinness said. He called the IRA splinter groups "traitors to the island of Ireland. They have betrayed the political desires, hopes and aspirations of all of the people who live on this island, and they don't deserve to be supported by anyone."

Analysts said the dissidents' dramatic escalation of bloodshed since Saturday was designed to divide and undermine McGuinness and Robinson as they embarked on their most significant foreign mission: a planned 10-day tour of the United States culminating at the White House on St. Patrick's Day, March 17, to meet U.S. President Barack Obama.

Twice, deadly shootings have obliged the power-sharing chiefs to postpone their departure. They will try again Wednesday, and still expect to meet Obama next week on Ireland's national holiday, the day when Northern Ireland leaders traditionally curry U.S. economic and political support.

After their first-ever joint appearance with the police chief, McGuinness and Robinson - who have kept their distance during eight frosty months sharing power - traveled in the same car together to visit Carroll's widow. The 23-year police veteran was shot in the back of his head Monday night when a gunman from the Continuity IRA dissident group fired on his parked police car.

Carroll had been part of a police backup unit for front-line officers investigating the home of a woman who reported that youths were smashing her windows in a Catholic part of Craigavon. Carroll's widow, Kate, said he had hugged her and told her before leaving home that morning: "Don't worry - they won't get me."

"A good husband has been taken away from me, and my life has been destroyed," she said.

But political analysts widely suggested Tuesday that the dissidents, though likely trying to exacerbate tensions between Robinson's Democratic Unionists and McGuinness' Sinn Fein, were having the opposite effect.

The Northern Ireland Assembly, the 108-member legislature that provides the bedrock for the Robinson-McGuinness administration, observed a minute's silence Tuesday in honor of Carroll's sacrifice. The day before, they did the same in memory of Cengiz Azimkar, 21, and Mark Quinsey, 23 - the unarmed, off-duty soldiers gunned down by another splinter gang, the Real IRA, outside their army base Saturday.

Both the Continuity IRA and the Real IRA are committed to unraveling the 2005 decision by the mainstream "Provisional" IRA to renounce violence and disarm, officially ending its 1970-97 campaign to force Northern Ireland out of the United Kingdom after killing 1,775 people and maiming thousands more. 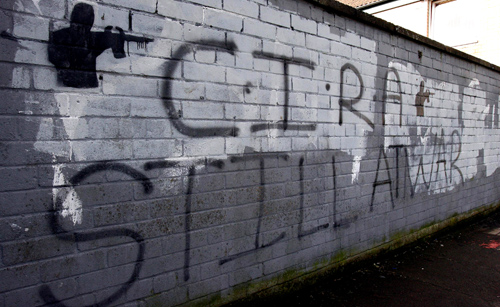 Graffiti on a wall in Craigavon, near the scene of the murder of a policeman. An IRA dissident group, the Continuity IRA, claimed responsibility for the killing.)

Politicians and police agree it has been only a matter of luck that, until Saturday, more than 20 dissident attacks against police and army bases since November 2007 have wounded just seven policemen and killed nobody.

Both groups remain small, with estimated membership ranging from 200 to 500, and their pool of recruits is restricted versus previous generations. Whereas the Provisional IRA enjoyed strong support in a largely poor and excluded Catholic minority, today's Catholics are largely middle class, comfortable and pleased to have a share of power.

Nonetheless, experts on the IRA and its dissident offshoots caution that the Real and Continuity factions are unlikely to stop in response to public pressure - because they are pursuing the same stubborn example long set by McGuinness' generation.

"The kinds of things they (dissidents) are doing now is what the Provisional IRA, which was led by Gerry Adams and Martin McGuinness, was doing 15 years ago," said Kevin Toolis, author of a study of the IRA and commentator on the Sinn Fein-IRA movement.

The dissidents' determination to keep killing police and soldiers is "not alien and foreign to Irish republican thinking," he said.

A fringe political party linked to the Continuity IRA, Republican Sinn Fein, forecast Tuesday that troops and police would always remain subject to attack in Northern Ireland until the territory was merged with the Republic of Ireland.

"It's always been on the cards while England remains here, and while they have their occupying forces here," said Geraldine Taylor, a former IRA prisoner who represents the party in Catholic west Belfast. "It's inevitable that you'll have young people take up arms against the occupation of this country, whether it be the armed force of the police or the British Army."