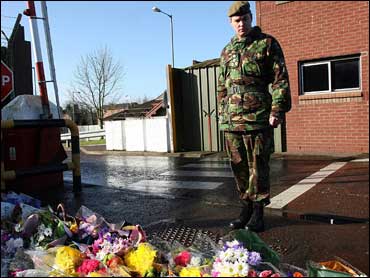 The Real IRA, which claimed responsibility for killing two British soldiers over the weekend, has caused more havoc than any other Irish Republican Army splinter group since most IRA members embraced a peace process in Northern Ireland.

The Real IRA pursues a dream, abandoned by the mainstream of the IRA, of forcing Northern Ireland out of the United Kingdom and into the Republic of Ireland.

It committed Northern Ireland's deadliest terrorist act, the Aug. 15, 1998 car bombing in Omagh that killed 29 people and wounded more than 300. However, it has shown nothing approaching the IRA's ability to mount attacks from 1970 to 1997, when it killed nearly 1,800 people in both Northern Ireland and Britain.

The dissidents are few in number, according to Paul Bew, professor of Irish politics at Queen's University in Belfast.

"Their potential influence lies in their ability to capsize the arrangements that have been reached between larger groups," Bew said in a commentary published Monday in The Times newspaper in London.

The group's reputed founder, Michael McKevitt, is in jail, the first man ever convicted in Ireland on a charge of directing terrorism.

McKevitt was "quartermaster general" for the IRA, the man responsible for its weapons stockpiles, but he broke away from the group in October 1997 shortly after most of its members accepted a cease-fire and political negotiations in Northern Ireland. He was convicted in 2003.

The Independent Monitoring Commission, set up to monitor Northern Ireland's half-dozen paramilitary factions, reported in November that the Real IRA posed "a serious and continuing threat and that it is likely to remain so."

The dissidents have ratcheted up their violence since November 2007, when they shot two policemen in the face with shotguns. Both survived. Several more police officers have been wounded in more than a dozen rocket, bomb and gun attacks since.

The Independent Monitoring Commission noted that the Real IRA and another dissident group, the Continuity IRA, had recently stepped up their activity.

"One possible reason for this may be a perception that the absence of progress on the devolution of justice and policing has created a political vacuum, or may have caused disaffection among republican supporters, which the dissidents think that they are able to exploit," the report said.