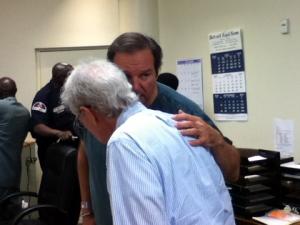 Bashara made a brief court appearance on Tuesday as the judge set a new arraignment date for August 7, at which time attorney Mark Kriger will take over.

Griem said he and Bashara mutually decided to part ways after suffering a "breakdown in communication." He didn't provide further details as to what happened between them, only saying that he and Bashara had problems from the beginning.

"In regards to Mr. Bashara's defense, we were not only not on the same page, we weren't even in the same book," Griem said.

Bashara was bound over for trial last week after a witness testified about an alleged plot to hire someone to kill his former handyman, Joseph Gentz.

Gentz is facing murder and conspiracy charges in the murder of Bashara's wife, Jane Bashara, whose body was found in her Mercedes-Benz SUV in Detroit in January. Gentz has claimed Bashara paid him to kill his wife.

Bashara has not been charged in his wife's death but has been named as a person of interest.