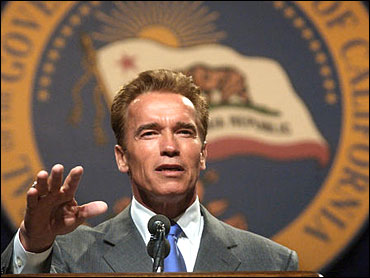 After fashioning a long-shot budget agreement, Gov. Arnold Schwarzenegger said he was ready to push ahead on a variety of issues, using his momentum to further break down this state's deep political divides.

The former Hollywood actor achieved his biggest victory since being elected governor of the nation's most populous state by getting the legislature Friday to adopt a budget reform package that would put before voters a $15 billion bond measure and new spending restrictions.

The reform package appeared all but dead only a week ago when the Democrat-controlled state house rejected the GOP governor's original proposals, which called a much more restrictive spending cap in addition to the bond measure.

But after softening his position, Schwarzenegger sold a large majority of lawmakers on a more modest plan that most observers believe can only help the state's troubled financial condition and may build toward further budget reforms.

The big question facing the new governor is how he will use his fresh political clout to meet his other budgetary objectives, which include reforming the state's worker's compensation system and identifying revenue sources to avert a pending cash crisis among city and county governments.

"I will work with everyone," Schwarzenegger said during a bill-signing ceremony Friday placing the reform package on the March ballot. "That's the thing that everyone has asked me since coming to Sacramento - `Arnold, how are you going to deal with the Democrats?"'

"I can work with them. I go to bed every night next to a Democrat," he said, referring to his wife, Maria Shriver, a member of the Kennedy family.

The multifaceted package includes a mandate that spending cannot exceed revenues in any year. It prohibits long-term borrowing to pay operating expenses, except for the $15 billion bond.

It also grants the governor the authority to force lawmakers to deal with a fiscal emergency, by calling a special session and stopping all other business until solutions are adopted.

Perhaps most important, however, is a requirement for the Legislature to begin building a reserve fund. Starting in 2006-07, lawmakers will be required to set aside 1 percent of general fund revenues into a "rainy day" fund and to increase the set aside each year until the reserve fund reaches $8 billion.

The bond deal would also allow the state to issue up to $15 billion in bonds to finance the deficit. The debt would be repaid in nine years by diverting a quarter-cent portion of the state's existing sales tax. If approved by voters, the bonds would replace about $13 billion in bonds included in the current budget, but which are in jeopardy of being ruled unconstitutional by pending court challenges.

Although the spending limits were applauded in some corners, some senators called the plan a sham.

"The people of this state two months ago voted for a change," said Sen. Sam Aanestad, R-Grass Valley. "There were expectations that we would be done with business as usual and I'm disappointed. This bill has no meaningful reform."

Others called it a good compromise.

"What it does is force this state to begin to live within our means. This bill is better than the current situation," Senate Republican Leader Jim Brulte.

Some observers said that while the reforms aren't as strict as some would like, they're a good first step.

"It does not address the question of whether to raise taxes, impose cuts or a combination of the two," said Stephen Levy of the Center for Continuing Study of the California Economy. "It does put the parties in the state on record saying that we will adopt a balanced budget and we will no longer use borrowing to make up deficits."

"This calls for a reserve fund and in that manner forces the Legislature to put money aside. I think that is a big deal," Ross said.Schwarzenegger originally called for a strict spending cap that would grow only with the rate of inflation and population. Democrats called the plan too restrictive, arguing that starting such measures in a poor economic year would prevent the state from restoring cut programs during flusher times.

But after the defeat of his original proposal last Friday, Schwarzenegger agreed to a compromise proposal very similar to what the Democrats originally offered.