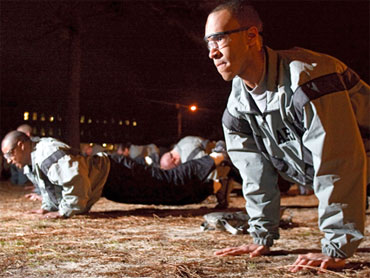 At 5 a.m. on the Army's largest training base, soldiers grunt through the kinds of stretches, body twists and bent-leg raises that might be seen in an "ab blaster" class at a suburban gym.

Adapting to battlefield experience in Afghanistan and Iraq, the Army is revamping its basic training regimen for the first time in three decades by nixing five-mile runs and bayonet drills in favor of zigzag sprints and honing core muscles.

Trainers hope the switch will better prepare soldiers physically for the pace of combat, with its sudden dashes and rolling gun battles. They also want to toughen recruits who are often more familiar with Facebook than fistfights.

The exercises are part of the first major overhaul in Army basic fitness training since men and women began training together in 1980, said Frank Palhoska, head of the Army's Fitness School at Fort Jackson, which has worked several years on overhauling the service's fitness regime.

"We don't run five miles in combat, but you run across the street every day," Palhoska said, adding, "I'm not training long-distance runners. I'm training warriors" who must shuttle back and forth across a back alley.

Drill sergeants with combat experience in the current wars are credited with urging the Army to change training, in particular to build up core muscle strength to walk patrols with heavy packs and body armor or to haul a buddy out of a burning vehicle.

One of those experienced drill sergeants is 1st Sgt. Michael Todd, a veteran of seven deployments to Iraq and Afghanistan.

On a recent training day Todd was spinning recruits around to give them the feel of rolling out of a tumbled Humvee. Then he tossed on the ground pugil sticks made of plastic pipe and foam, forcing trainees to crawl for their weapons before they pounded away on each other.

"They have to understand hand-to-hand combat, to use something other than their weapon, a piece of wood, a knife, anything they can pick up," Todd said.

The new training also uses "more calisthenics to build core body power, strength and agility," Palhoska said in an office bedecked with 60-year-old black and white photos of World War II-era mass exercise drills. Over the 10 weeks of basic, a strict schedule of exercises is done on a varied sequence of days so muscles rest, recover and strengthen.

Another aim is to toughen recruits from a more obese and sedentary generation, trainers said.

Many recruits didn't have physical education in elementary, middle or high school and therefore tend to lack bone and muscle strength. When they ditch diets replete with soda and fast food for healthier meals and physical training, they drop excess weight and build stronger muscles and denser bones, Palhoska said.

Lt. Gen. Mark Hertling of the Army's Training and Doctrine Command, the three-star general in charge of revamping all aspects initial training, said his overall goal is to drop outmoded drills and focus on what soldiers need today and in the future.

Bayonet drills had continued for decades, even though soldiers no longer carry the blades on their automatic rifles. Hertling ordered the drills dropped.

"We have to make the training relevant to the conditions on the modern battlefield," Hertling said during a visit to Fort Jackson in January.

The general said the current generation has computer skills and a knowledge base vital to a modern fighting force. He foresees soldiers using specially equipped cell phones to retrieve information on the battlefield to help repair a truck or carry out an emergency lifesaving medical technique.

But they need to learn how to fight.

"Most of these soldiers have never been in a fistfight or any kind of a physical confrontation. They are stunned when they get smacked in the face," said Capt. Scott Sewell, overseeing almost 190 trainees in their third week of training. "We are trying to get them to act, to think like warriors."

For hours, Sewell and his drill sergeants urge on helmeted trainees as they whale away at each other with pugil sticks, landing head and body blows until one falls flat on the ground. As a victor slams away at his flattened foe, a drill sergeant whistles the fight to a halt.

"This is the funnest day I've had since I've been here!" said 21-year-old Pvt. Brendon Rhyne, of Rutherford County, N.C., after being beaten to the ground. "It makes you physically tough. Builds you up on the insides mentally, too."

The Marine Corps is also applying war lessons to its physical training, adopting a new combat fitness test that replicates the rigor of combat. The test, which is required once a year, has Marines running sprints, lifting 30-pound ammunition cans over their heads for a couple of minutes and completing a 300-yard obstacle course that includes carrying a mock wounded Marine and throwing a mock grenade.

Capt. Kenny Fleming, a 10-year-Army veteran looking after a group of Fort Jackson trainees, said men and women learn exercises that prepare them to do something on the battlefield such as throw a grenade, or lunge and pick a buddy off the ground. Experience in Iraq has shown that women need the same skills because they come under fire, too, even if they are formally barred from combat roles.

Fleming said those who had some sort of sports in high school can easily pick up on the training, while those who didn't have to be brought along. One hefty soldier in a recent company he trained dropped 45 pounds and learned to blast out 100 push-ups and 70 sit-ups, he said.

"We just have to take the soldier who's used to sitting on the couch playing video games and get them out there to do it," Fleming said.