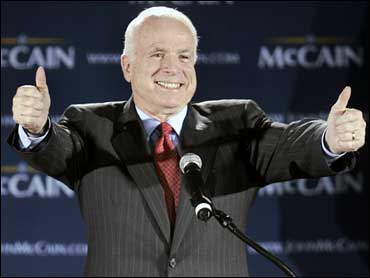 In 2007, much of America's political oxygen was consumed by the two I-words: Iraq and immigration. If the former was supposed to boost John McCain's GOP primary campaign, the latter was supposed to torpedo it. Not only did the Arizona senator favor a relatively liberal immigration policy, he had cosponsored legislation with left-wing lion Ted Kennedy to establish a temporary worker program and offer millions of illegal immigrants a path to citizenship. In the summer of 2005, the cover of National Review had assailed McCain as "Amnesty John." In the late spring and early summer of 2007, McCain supported a comprehensive immigration reform bill that provoked furious opposition from conservative talk radio and the Republican base. It nearly destroyed his presidential bid.

But McCain survived the immigration debate and eventually climbed back into the race. He won the New Hampshire primary, and now he has triumphed in one of the most conservative states in the Union.

South Carolina is not a border state. But according to one estimate, the number of illegal immigrants living there jumped by a whopping 1,000 percent between 1990 and 2004. It is now "estimated at between 150,000 and 400,000," the Guardian reports. (The overall population of South Carolina is about 4.4 million.) Just before the primary, the Guardian quoted Francis Marion University political scientist Neal Thigpen as saying, "This is the new Confederate flag issue in South Carolina on the Republican side." A recent Goldman Sachs study notes that South Carolina's Hispanic population "grew almost 7 percent per year from 2000 to 2007," which ranked among "the fastest rates in the country." (The number of Hispanics "grew from a small base in 2000," Goldman added, "but we expect continued rapid expansion.")

According to the CNN exit poll numbers, 26 percent of GOP primary voters in South Carolina said that illegal immigration was the most important issue, compared to 40 percent who said the economy, 16 percent who said Iraq, and 15 percent who said terrorism. Overall, 47 percent of voters said the best way to handle illegal immigrants is either to give them a path to citizenship (28 percent) or to implement a temporary worker scheme (19 percent). A plurality (44 percent) of those favoring a path to citizenship voted for McCain, as did a plurality (37 percent) of those endorsing a temporary worker program. No surprises there.

But here's the interesting part: Among the majority (52 percent) of voters who said the best way to handle illegal immigrants is to "deport them," 26 percent went for McCain while only 19 percent went for Fred Thompson and 15 percent went for Mitt Romney. A plurality (34 percent) went for Mike Huckabee, who has taken a sharp right turn on the issue. But McCain (24 percent) beat both Thompson (21 percent) and Romney (16 percent) among the 26 percent of voters who said illegal immigration was the most important issue. This despite Romney's repeated efforts to paint McCain as soft on illegals, despite Thompson's embrace of a more hardline position, and despite the last-minute warning from Jim DeMint, South Carolina's popular GOP senator, that "we cannot afford to have a president who has fought for amnesty for illegal immigrants."

Illegal immigration does not currently dominate the front pages, cable chat shows, and political blogs the way it did in mid-2007. This helped McCain. But he has also recalibrated his message, emphasizing border security first and denying (somewhat disingenuously) that he ever supported "amnesty." Unlike in 2000, observes Byron York of National Review, McCain had the backing of a large portion of South Carolina's GOP establishment. He ran even with Huckabee (32 percent to 32 percent) among voters who said the economy was the most important issue, held a narrow edge (33 percent to 30 percent) among voters who ranked terrorism first, and won big (52 percent to 24 percent) among voters who said Iraq was most important.

McCain dominated among liberals and moderates - who compromised less than a third of all primary voters - but he also beat Thompson and Romney among self-described conservatives, winning 26 percent to Thompson's 19 percent and Romney's 16 percent. McCain even topped Huckabee, albeit barely, among the narrower group of "somewhat conservative" voters, winning a 32 percent plurality to Huckabee's 30 percent.

A plurality (43 percent) of voters reckoned that McCain stood the best chance of winning the general election in November. Among this group, more than two-thirds (69 percent) voted for the Arizona senator. Yet only 6 percent of all voters said that "electability" was the top quality they were looking for in a candidate. However, McCain won an overwhelming majority (67 percent) of the 23 percent who ranked "experience" as their top quality, and he carried a plurality (34 percent) of the 26 percent who most wanted a candidate who "says what he believes." Crucially, McCain won a plurality (44 percent) among the 46 percent of voters who said "personal qualities" were more important to their vote than "issues."

To be sure, McCain trailed behind both Huckabee and Thompson among "very conservative" voters, winning 19 percent to Huckabee's 41 percent and Thompson's 22 percent. That mirrored his poor showing among strong conservatives in New Hampshire. But McCain benefited from the four-way race with Huckabee, Thompson, and Romney. "If there had been just a single 'conservative' candidate to oppose him" in South Carolina, notes RealClearPolitics blogger Jay Cost, "McCain might have lost."

True enough. He is still a long way from securing the GOP nomination, and many Republicans still distrust him. Among other influential conservatives, Rush Limbaugh has been hammering away at the Arizona senator and predicting that a McCain nomination would "destroy the Republican party." Former GOP lawmakers Tom DeLay and Rick Santorum have publicly blasted him. McCain may yet stumble. But the results in South Carolina, one of the reddest states on the map, suggest that his immigration record is not the insurmountable obstacle it appeared to be last year.
By Duncan Currie
©