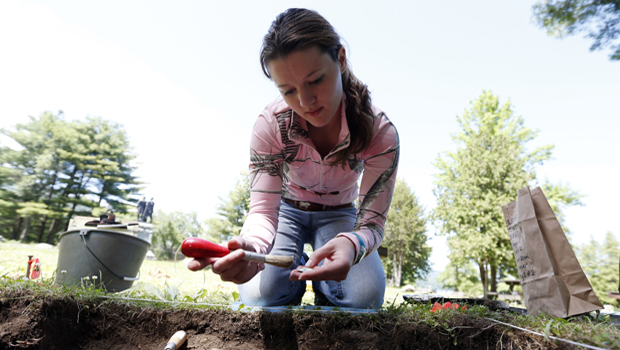 Archaeologists are excavating an 18th-century battleground that was the site of a desperate stand by Colonial American troops, the flashpoint of a massacre and the location of the era's largest smallpox hospital.

The site's multilayered history poses unique challenges for the dig, which is being conducted in a state-owned park that has served as a natural time capsule amid the summertime bustle in this popular southern Adirondack tourist destination.

"It's a confusing and complicated site," said David Starbuck, the archaeologist who's leading the project during the State University of New York at Adirondack's annual six-week archaeology field school.

Starbuck and his team of two dozen students and volunteers began excavations two weeks ago in a section of Lake George Battlefield Park, located on rising ground overlooking the southern end of the 32-mile lake. New York state has owned the park since the late 1890s, a fact that Starbuck credits with protecting the site from commercial development and intrusion by treasure hunters.

"This really is an incredibly well-preserved site," said Starbuck, a professor of anthropology at New Hampshire's Plymouth State University. He has conducted digs at 18th-century military sites in eastern New York for more than 25 years.

The village of Lake George has yielded troves of artifacts over the decades. Starting with the French and Indian War (1755-63) and continuing through the end of the Revolutionary War in 1783, tens of thousands of American, British, French and Indians encamped here during various military campaigns aimed at controlling the waterways connecting the upper Hudson River and Canada. Battles were fought and forts were destroyed or abandoned; the material traces of all that activity are still being uncovered.

Many of the discoveries have been made at the battlefield park, one of the most significant 18th-century military sites in the region. It was the site of the Battle of Lake George, fought on Sept. 8, 1755, between British Colonial troops and their Mohawk allies and a force of French and Indians. After an ambush that killed scores of New England militiamen, the Colonials - their backs to the lake and only a single British officer among their leaders - successfully fought off the ensuing enemy attack.

Two years later, the same site was home to a large encampment of British and Colonial troops during the French siege of nearby Fort William Henry. After the British surrendered the fort to the French, they began the 15-mile retreat to Fort Edward from the encampment, only to be attacked by the Indians allied to France. About 200 are believed to have been killed in what became known as the massacre of Fort William Henry, though historians believe most of the atrocities occurred just outside the encampment.

Starbuck said he hopes to uncover evidence of the 1755 battle and the so-called entrenched camp that played a role in the siege and massacre that inspired James Fenimore Cooper's "The Last of the Mohicans." The field school last dug at the park site in 2001-02, uncovering a bayonet, musket barrel and military compass, among numerous other artifacts.

So far, the dig has mostly yielded pieces of wine bottles dating to the 18th century, Starbuck said.

Heather Engwer, 25, a Lake George native who grew up hearing stories about her hometown's history, has returned as a volunteer digger for the sixth summer.

On a recent balmy day, Engwer uncovered a section of a cow's vertebrae with the butcher's marks clearly visible. The find jibes with 18th-century accounts of cattle being driven north from Albany to Fort Edward, then along the Military Road to the lake's southern end to feed the thousands of soldiers manning the wilderness outposts here.

"It's really cool to apply my skills," she said. "I'm pursuing my passion."

During the Revolutionary War, the same grounds were believed to have been the site of a smallpox hospital that treated returning American troops infected with the disease during the colonies' attempt to conquer Quebec. More than 1,000 stricken soldiers may have died here, Starbuck said.

Starbuck hopes the project draws more visitors to the park, which is open for daytime picnicking and anchors the southern end of the Warren County bike path. With a quarter-century of history within its confines, the park has an intriguing story to tell, he said.

"It's a wonderful resource that a lot more people could be using," he said.