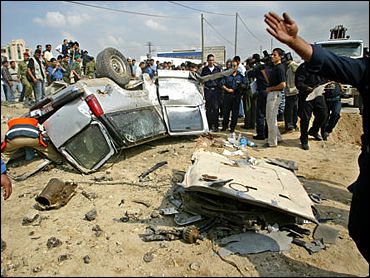 Families of U.S. citizens killed or hurt in terrorist attacks in Israel have filed an $875 million lawsuit against Arab Bank, accusing it of channeling money to Palestinian terrorist groups and making insurance payments to beneficiaries of suicide bombers.

"The Arab bank has been distributing monies to suicide bombers or the families of suicide bombers," said Israeli-American Rabbi Seth Mandel, whose teenage son was killed by Palestinian militants.

The lawsuit, filed Friday in federal court in the Eastern District of New York, claims the bank's New York branch laundered Saudi aid to terrorists. The branch first converted the money into dollars and then sent it to local branches in the West Bank and Gaza Strip where it was paid out to terrorists and terrorist organizations, the suit alleges.

The bank also worked with Hamas and the Palestinian Islamic Jihad to distribute insurance money to beneficiaries of suicide bombers, including their families and those wounded or captured by Israeli security forces, the lawsuit alleges.

"We have a mountain of evidence that will prove that the bank not only knows about the terror financing, but is actively involved and using its New York branch to launder the money," Mark Werbner, the lead attorney for the families, said in a statement Tuesday.

Officials with Arab Bank, based in Amman, Jordan, could not immediately be reached for comment.

Security sources told The Associated Press in Jordan that no suspicious transactions through Arab Bank branches in Jordan or the West Bank had been detected. The bank, like other Jordan-based financial institutions, is under close government monitoring in line with tough Jordanian banking regulations.

Jordanian and U.S. officials have been closely monitoring transfers to prevent money laundering and financing terror activities, especially since the Sept. 11, 2001, terror attacks in the United States, the officials added, speaking on condition of anonymity.

The lawsuit, Linde v. Arab Bank, includes six U.S. families whose members have died or been hurt in attacks in Israel.

Among them is Courtney Linde, the widow of John Linde Jr., a security guard from Missouri who died when a bomb tore apart a vehicle in a U.S. diplomatic convoy in the Gaza Strip last October.

"John was a wonderful and gentle person, but he was also a Marine and I know he would have wanted me to fight for him," Courtney Linde said in statement Tuesday.

Other victims participating in the lawsuit were Matanya and Chana Nathansen, who were hurt in a bombing attack on a bus in Jerusalem last August. The couple's 2-year-old daughter, Tehila, died in the attack.

Arab Bank has 30 branches across the Middle East, Europe, the United States, Australia and North Africa. It often leads the Amman Stock Exchange. The New York branch is the only one in the U.S.