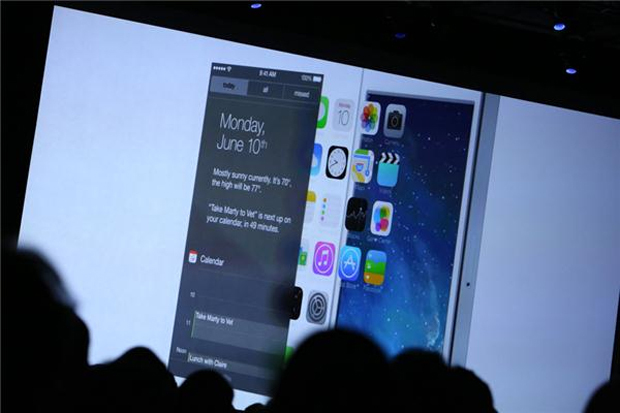 Apple announced an overhaul to its mobile operating system and a new streaming radio app Monday at the Worldwide Developers Conference (WWDC).

"The biggest change to iOS since the iPhone," Apple CEO Cook said at the Moscone Center in San Francisco.

All of Apple's apps in iOS 7 are getting a reboot. CNET described the new look as panes of glass. The new lock screen and home screen have a clean white look, with a phone's number pad featuring round buttons.

The Game Center is now simple and white, getting rid of the felt green background its had since launch. Stocks, Compass, Calculator and Weather all have new looks that are are in line with Apple's new clean, flat look.

Chat bubbles are now missing the shiny, 3D look that has been Apple's signature from the first iPhone. Notifications are now available on the lock screen and have a transparent look.

A new feature called Control Center lets users control settings like brightness, media, AirPlay and apps. Tabs have been redesigned to scroll vertically and are no longer limited to 8 pages.

The iPhone's Camera app will get live photo filters and the abiblity to share with a select group of friends. Photos will start to be organized into moments, much like iPhoto's events. Friends can now share photos to another users' iCloud stream and videos can now be streamed straight from the cloud.

Apple also announced an iTunes Radio app that streams music and lets users create custom stations much like Pandora. The new app has integrated some of its features from Genius, the software that learns music taste and builds recommendations upon the data. iTunes Radio users will have access to all of the iTunes catalog - about 26 million tracks. The new app will also be available in iTunes and Apple TV.

An ad supported version will be free for U.S. customers, but iTunes Match subscribers will not see any ads.

Apple's iOS 7 beta is available for download today and will run on iPhone 4 and up, iPad 2 or later, iPad mini and the fifth-generation iPod Touch.