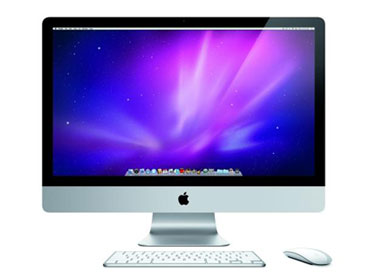 Apple revamped its desktop and laptop lines Tuesday, dramatically redesigning the iMac all-in-one and MacBook laptop, and also adding a few updates to its Mac Mini line of small-scale desktops. It also introduced a handful of updated peripherals, with a multitouch mouse bringing the most thorough changes

As for specs, Apple has mostly opted for raw speed over adding more processing cores. All but the $1,999 iMac come with Intel Core 2 Duo chips, but the CPU speed in the lowest model now starts at 3.06GHz. That used to be the fastest chip available in Apple's previous highest-end iMac. The one exception is the $1,999 iMac, which starts with Intel's most recent quad-core chip, the core i5 at 2.66GHz, and upgrade options for that model go all the way to the even faster Core i7 at 2.8GHz.

Other new iMac features are relatively straightforward for the systems themselves. There's no Blu-ray option, as was rumored, but you do get an SD Card slot on all new iMacs. The 27-inch version also lets you use its mini-Display Port input as a video input (via a dongle from Belkin), which means you can use the larger iMac as a second monitor. The GeForce 9400M remains the standard graphics chip, with upgrades available to Radeon HD 4670 and Radeon HD 4870 chips. Storage options go as high as 2TB on the 27-inchers

Apple has also revamped its best-selling laptop, the 13-inch MacBook. The new version retains the white polycarbonate look, as well as the $999 price

With every other laptop in Apple's current lineup using the "Pro" moniker, the single non-Pro MacBook was starting to look a bit dated. While many industry watchers expected Apple to lower prices on the white polycarbonate version, the company has given the system an upscale makeover, keeping the price the same.

Like the aluminum MacBook Pro models, the MacBook now has a unibody chassis, although in this case, it's still made of polycarbonate. A separate bottom panel has a matte non-slip feel, as opposed to the glossy white upper body. The unibody construction means the battery is no longer removable--also like the current Pro lineup.

We got a chance to get our hands on one of the new MacBooks this morning. While still recognizably a MacBook, the new version has more gently rounded edges on the lid, making it look slightly thinner from a side angle. The touch pad is the same large glass multitouch version found on the MacBook Pros, and is dominated by the wrist rest. Also like the Pro versions, the 13.3-inch display is now LED backlit, which is better for both power consumption and environmental concerns.

Internal components, including the Nvidia GeForce 9400, are either the same, or very similar to, current models. Some features found in the 13-inch MacBook Pro that you won't find in this new MacBook include the SD card slot and backlit keyboard.

While consumers have long called for lower entry prices for Mac laptops, Apple has always been reluctant to stray into the lower-margin sub-$1,000 market. With this new upscale version of the MacBook, Apple is giving a slight recessionary nod to buyers, without having to dive into the Netbook price wars.

You'll also find new peripherals in the box with a new iMac. Apple has made a wireless mouse and keyboard the default options, and both have received redesigns. The keyboard now has an all aluminum body, but the new mouse, dubbed the Magic Mouse, is far more interesting. The sleek, touch capacitive design behaves similarly to the track pad on Apple's laptops. Of course the standard two-button usage model works as you'd expect, but you can also simply drag your finger down the middle of the mouse to scroll up and down. It also supports accelerated scrolling, like the

Finally, Apple gave a nod to the Mac Mini. The core design remains the same for the most part, with a few minor tweaks to its CPU, memory, and hard-drive capacity. Prices remain the same at $599 and $799. Far more interesting is the new server iteration of the Mac Mini. This model starts at $999, and instead of a DVD burner, you get the Snow Leopard version of OS X Server, along with two 500GB hard drives.

All of these new products are available today, except for the Core i5-based iMac, which goes on sale in November. We'll also be posting hands-on slideshows and videos of the new MacBook and the new 27-inch iMac shortly, so stay tuned.
©2009 CBS Interactive Inc. All rights reserved