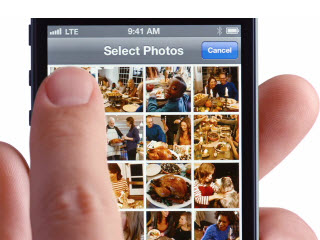 (MoneyWatch) Apple (AAPL) has used its patents as a competitive weapon against companies like Samsung that make Google (GOOG) Android-based smartphones. Now Apple is feeling the heat from the U.S. Patent and Trademark Office, which has provisionally ruled that the company's crown patent jewel, the so-called "Steve Jobs multi-touch patent" is invalid, as Florian Mueller reports on his FOSS Patents blog.

This isn't the first Apple patent to be challenged by the patent office. In October, a similar action by the agency preliminarily invalidated another patent that Apple is seeking to enforce against Samsung court.The multi-touch patent is particularly notable, however, because it is supposed to cover the touch interface on the iPad and iPhone, the most fundamental feature of the devices.

The action is not final. Apple has two months to contest the patent office's decision. The could still win out, although it's notable that every single point that Apple claimed in its original patent application is now in question. And even if Apple loses this patent, the company's overall strategy of reinforcing the legal moats around its products will carry on.

In the patent world, so-called "reexamination requests" are a common procedure in which a third party can challenge the validity of a granted patent. Indeed, Apple has often used the approach to attack other companies' patents.

It is not clear who ultimately might have requested the patent office reexamination, although the motion was filed in January 2010 by New York law firm Kelly Drye & Warren. The firm has done intellectual property work for both Apple and Samsung in the past. Kelly Drye is also listed as having filed a request to reexamine another Apple patent titled "Method and an Apparatus for Contacting a Touch-Sensitive Cursor-Controlling Input Device to Generate Button Values."

Specifically, such reexamination requests can raise questions about the validity of patent claims, which are the legally protected aspects of an invention. Every patent will have at least one claim, though having multiple claims is typical. You would be on the losing end of a patent infringement lawsuit should a company sue and a court find that your product does something described by at least one of the claims.

Patent number 7,479,949, which Apple filed for in 2008 and received on Jan. 20, 2009, had 20 claims. According to the patent office paperwork uncovered by Mueller, the patent examiner who reexamined the patent has initially determined that not a single claim should be valid.

Furthermore, multi-touch interfaces have been around since the early 1980s, and some key prior "art" -- documentation of previous work in the area -- was not referenced in Apple's application.  That seemed curious at the time, as at least one, a 1999 doctoral dissertation by Wayne Westerman, should have been obvious as Westerman and John Elias went to work for Apple when it acquired their company FingerWorks in 2005. There are also seminal patents in the area owned by the University of Delaware but invented by Westerman and Elias.

All that said, a full invalidation of the patent would likely have little impact on Apple. Although the company has asserted the patent against Samsung and Motorola, its infringement suits never depend on the claims in a single patent. The company has for years focused on filing numerous patent applications in mobile computing.

Although a final invalidation of the Jobs patent might cause some shifting in its legal tactics, Apple still has more than enough patents, and money, to fuel legal action going forward.

Is it time to hang up on voicemail?

Can shopping online make you a victim of price discrimination?
Erik Sherman