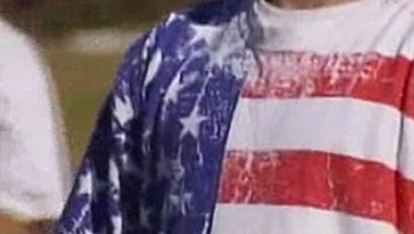 The 9th U.S. Circuit Court of Appeals said the officials' concerns of racial violence outweighed students' freedom of expression rights. Administrators feared the American-flag shirts would enflame the passions of Latino students celebrating the Mexican holiday. Live Oak High School, in the San Jose suburb of Morgan Hill, had a history of problems between white and Latino students on that day.

"Our role is not to second-guess the decision to have a Cinco de Mayo celebration or the precautions put in place to avoid violence," Judge M. Margaret McKeown wrote for the panel. The past events "made it reasonable for school officials to proceed as though the threat of a potentially violent disturbance was real," she wrote.

The case garnered national attention as many expressed outrage that students were barred from wearing patriotic clothing. The Ann Arbor, Mich.-based American Freedom Law Center, a politically conservative legal aid foundation, and other similar organizations took up the students' case and sued the high school and the school district.

"It is truly a sad day when government officials are permitted to ban the American flag on a public high school campus for any reason," Robert Muise, the American Freedom Law Center's co-founder and senior counsel, said in a statement.

"Here, school officials feared that our clients would offend 'Mexican' students if they wore their flag shirts to school on Cinco de Mayo, so they ordered the students to either remove their shirts or leave school in direct violation of their First Amendment rights," Muise said.

William Becker, one of the lawyers representing the students, said he plans to ask a special 11-judge panel of the appeals court to rehear the case. Becker said he would appeal to the U.S. Supreme Court if he loses again.

"The 9th Circuit upheld the rights of Mexican students celebrating a holiday of another country over U.S. student proudly supporting this country," Becker said.

Cinco de Mayo marks the Battle of Puebla on May 5, 1862, when Mexican troops defeated a French army of Napoleon III, then considered the mightiest military in the world. It is considered a bigger holiday in the U.S., celebrating Mexican heritage with parades and revelry in many major cities.