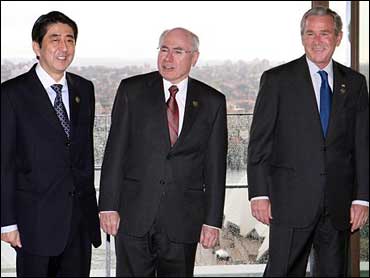 Pacific Rim leaders on Saturday said the world needs to "slow, stop and then reverse" greenhouse gas emissions, and adopted modest goals to curb global warming as thousands of demonstrators rallied to demand they do more.

Some experts and activists dismissed as ineffective the program adopted by the presidents of the United States, China, Russia and leaders of other Asia-Pacific economies at an annual summit - which did not set goals for cutting countries' output of polluting gases.

But it sets a precedent because it applies to all of the group's mix of rich and developing members, and could influence upcoming U.N. negotiations on climate change.

"The world needs to slow, stop and then reverse the growth of global greenhouse gas emissions," the 21 leaders said in the Asia-Pacific Economic Cooperation forum's declaration on climate change.

Leaders "charted a new international consensus for the region and the world," summit host Australian Prime Minister John Howard said outside the Sydney Opera House, where the leaders adopted the declaration on the first of two days of talks.

A dozen blocks away and on the other side of a 10-ft. metal fence fortified by concrete barriers and a police cordon, about 3,000 protesters held a colorful, mostly peaceful march and rally. Causes included protests against U.S. President George W. Bush, the Iraq war and ending poverty.

Kerry Nettle, a senator from the Greens party, demanded that the Pacific Rim leaders take "real action" on global warming, drawing cheers. One protester wore a T-shirt that read "Climate Change is not Cool." Another was dressed a polar bear.

Police, who had warned of potential violence and been given special search powers by the local government, had only minor scuffles with demonstrators, arresting 17 protesters. Two officers were also injured, police said.

The APEC climate change program brings together some of the world's powerhouse economies and some of its biggest polluters. As such, it could influence upcoming negotiations before the end of the year in Washington, New York and Indonesia to devise a successor to the U.N.-backed Kyoto Protocol when it expires in 2012.

"If you have APEC, especially the largest emitters - the U.S., China, Russia, Japan - sign up to an agreement like that, it would be hard to ignore at the global level," said Malcolm Cook of Sydney-based think-tank the Lowy Institute.

The program's centerpiece is a goal to reduce "energy intensity" - the amount of energy needed to produce a dollar of gross domestic product - 25 percent by 2030.

The only other concrete goal was to increase forest cover in the region by at least 50 million acres by 2020 - enough to absorb about 11 percent of the greenhouse gases the world emitted in 2004, the final statement said.

Both are nonbinding targets in keeping with APEC's voluntary, consensus-based approach.

Environmental groups and some climate change experts said the agreement was weak.

"In practical terms, that will mean almost nothing," said Frank Jotzo, an Australian National University expert in climate change economics. "It is very unambitious."

The energy intensity target sets a rate that most economies are naturally meeting as they get richer and shift out of power-intensive manufacturing, he said.

"If the APEC statement is the platform for future action on climate change, then the world is in trouble," said Greenpeace energy campaigner Catherine Fitzpatrick.

In the plodding bargaining this past week, officials tried to bridge differences between richer and developing nations.