It's something of a comedy classic; even if you haven't seen Judd Apatow's movies, you've heard of them: "The 40 Year Old Virgin," "Knocked Up," "Superbad."

All blockbuster comedies about the arrested development of the man-boy, all R-rated (and the "R" doesn't stand for "refined").

But for Judd Apatow, these movies are about much more.

"How would you describe a Judd Apatow comedy?" "Sunday Morning" contributor Mo Rocca asked the director.

"Well, there's usually not any incredibly smart characters," Apatow said. "Because I don't know how smart people talk. 'Cause I don't talk that good … There's profanity, and sometimes it's sexual and there's a lot of idiots involved. But it's really just about people trying to figure out how to do better."

People like Andy Stitzer, the hapless electronics store clerk played by Steve Carell, who at age 40, is still a virgin.

"People wanna connect," Apatow said. "That is most people's intention. They're just scared to do it. That's what 'The 40 Year Old Virgin''s about. He wants to connect. He just thinks people are gonna tell him he's a freak, so he hides in his room."

Apatow followed that with 2007's "Knocked Up," starring Seth Rogen and Katherine Heigl, who, after a drunken one-night, stand find themselves unexpectedly expectant.

After moving from sex to childbirth, Apatow has continued on to death with his newest film, "Funny People."

"George in 'Funny People,' he doesn't wanna connect with people," Apatow said. "He wants to get approval, and getting sick makes him realize he has no one to actually connect with. Even though he's one of the biggest stars in the world, he literally has no one to call, and the only person he can connect with is a young punk that he hires to be his assistant and to write him jokes. He pays for someone to hang out with him."

Apatow's movies stem from his own experiences, and as a former stand-up comic himself, he said this is his most personal film to date.

"Is it great to make people in the world laugh? And give them moments of respite from the pain of their day? Or is it just, 'Like me! Like me!'" 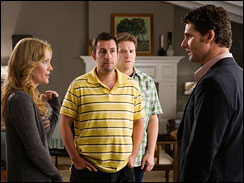 People certainly seem to like his movies - they've grossed more than a billion dollars.

But Apatow the director is constantly battling his demons.

Just weeks before the movie's release, during a sound mixing session, Apatow played the concerned parent.

"So this is the process where you start letting go?" Rocca asked.

If he seems unsure of his success, that's because - even at the young age of 41 - Apatow's traveled a long road. At age 10, he was already a student of comedy.

"I became obsessed with the Marx Brothers really early on," Apatow said.

"I did," Apatow said. "Because there was no video recorders back then. And it was live. And you thought, 'If I miss it, they may never even rerun it ever again.'"

Raised on Long Island, he was 13 when his parents split up.

"How awful was that?" Rocca asked.

"Well, for me, you know, the thing about divorce was it was the moment when you realize that your parents didn't know everything," Apatow said. "And that again drew me to comedy because comedy was a way of tryin' to work out, you know, does the world make sense?"

As soon as he could, he moved to Los Angeles to try his own hand at stand-up.

His roommate? A then-unknown Adam Sandler.

We sat down with Sandler, who stars in "Funny People" with Rogen and Leslie Mann.

"Judd is very enthusiastic about comedy," Sandler said. "He was the only comedian out of all of us that would come home excited about another guy being great. We were all just like, 'Oh, man, I better get goin', rework my game,' or angry that someone was better than us. Judd would just come up, 'Did you s-- oh my God. He killed!'"

While comedy was his calling, stand up - not so much.

"To be a great comic, you usually have to be very angry," Apatow said. "I was a Jewish boy from Long Island. Things didn't go that bad for me to really have the juice to get all worked up."

So Apatow turned full time to writing for others - Roseanne, his buddy Sandler and Garry Shandling.

Then, in 1999, Apatow collaborated on a television series about outcasts in a Michigan high school.

"'Freaks and Geeks,' you know, was a turning point because it was the first time that, you know, as we started kicking around ideas, I thought, 'Oh, maybe that thing that happened to me might also be interesting.'"

Like the autobiographical episode he wrote in which a teen misfit returns to an empty house, flips on the old "Dinah Shore Show" and finds solace in the comedy of Garry Shandling.

"At some point I realized, oh, the simple, really difficult struggles of life are fascinating," Apatow said. "So I stopped trying to think of high concepts for comedy, and I try to think of, you know, relatable, high-stakes issues that everybody has to deal with at some point."

His life and material have only gotten richer with his 12 years of marriage to "Funny People" actress Leslie Mann.

"Do you feel like your home life is constantly being mined for material?" Rocca asked Mann.

"I think the two of us like to do that together," Mann said. "I don't feel like he's snatching my, you know, experiences away from me. I'm happy to give them."

In an all-too-real scene from "Knocked Up," Heigl kicks Rogen out of her car on the way to a doctor's appointment.

"When your wife kicks you outta the car on the way to the gynecologist, you have to think to yourself, 'Does this mean I can go home?'" Apatow said. "Or, 'Do I have to somehow find a way to get there? 'Cause I might get in more trouble if I don't show up.'"

"And what did you do?" Rocca asked.

"That's when you're looking for cabs in the middle of La Brea Boulevard," Apatow said.

His wife has equal billing with Sandler and Rogen in "Funny People." But make no mistake, the Apatow stable of stars is pretty much a guys' club.

"When are you gonna write the movie with the big female lead?" Rocca asked.

But that distinct perspective has fueled a movie-making juggernaut.

"At this point, I have achieved an enormous amount of the goals to be a comic," Apatow said. "To make some movies, to have people like some of the movies, so it really does feel like, 'OK. You could relax now. You know, you can take a break.' You know, it's fine if that was it."