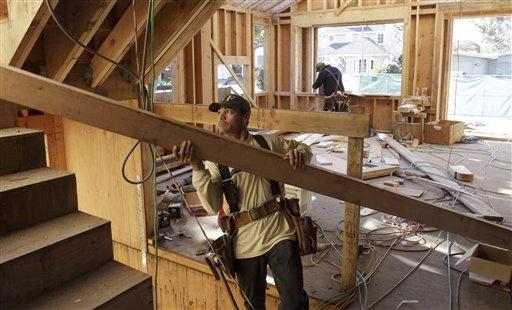 WASHINGTON (AP) - Home construction rose at the fastest rate in 20 months, pushed up by a spike in apartment building. But construction of single-family homes declined, a sign that demand for housing remains weak.

Builders broke ground on new homes and apartments at a seasonally adjusted annual rate of 596,000 units, a 14.6 percent jump from December.

Last year, builders worked on 587,600 new homes, just barely better than the 554,000 started in 2009. In a healthy economy, builders start about 1 million homes a year. The housing industry is coming off the worst two years for home construction dating back to 1959.

Snowstorms that fell in most parts of the country likely slowed some construction last month. But Michael Gapen, senior U.S. economist with Barclays Capital, said home building is unlikely to see a turnaround until builders can sell off most of the homes sitting idle on the market and there are fewer foreclosures to compete with.

Economists are watching the pace of multifamily construction, which includes housing with five or more units, to see if it continues to rise throughout 2011.

"If the home ownership rate is falling back to normal levels, it's fair to say we'd see an increase in rentals," Gapen said. "That's something we're all watching but multifamily is very volatile and we will want to wait a few months to see where it goes."

Millions of foreclosures have forced home prices down and more are expected this year. Tight credit has made mortgage loans tough to come by. And some potential buyers who could qualify for loans are hesitant to enter the market, worried that prices will fall further.

Building permits, an indicator of future construction, fell more than 10 percent in January. Code changes in California, Pennsylvania and New York caused an artificial spike the month before. Builders in those states rushed to file new permits before those changes went into effect in the new year.

The flat-lined housing market is weighing on the overall economic recovery. Each new home built creates, on average, the equivalent of three jobs for a year and generates about $90,000 in taxes, according to the National Association of Home Builders.

The trade association reported Tuesday that its index of builder confidence remained stuck at 16 in February, where it has been for four straight months. A reading of 50 signifies a positive outlook about the future.