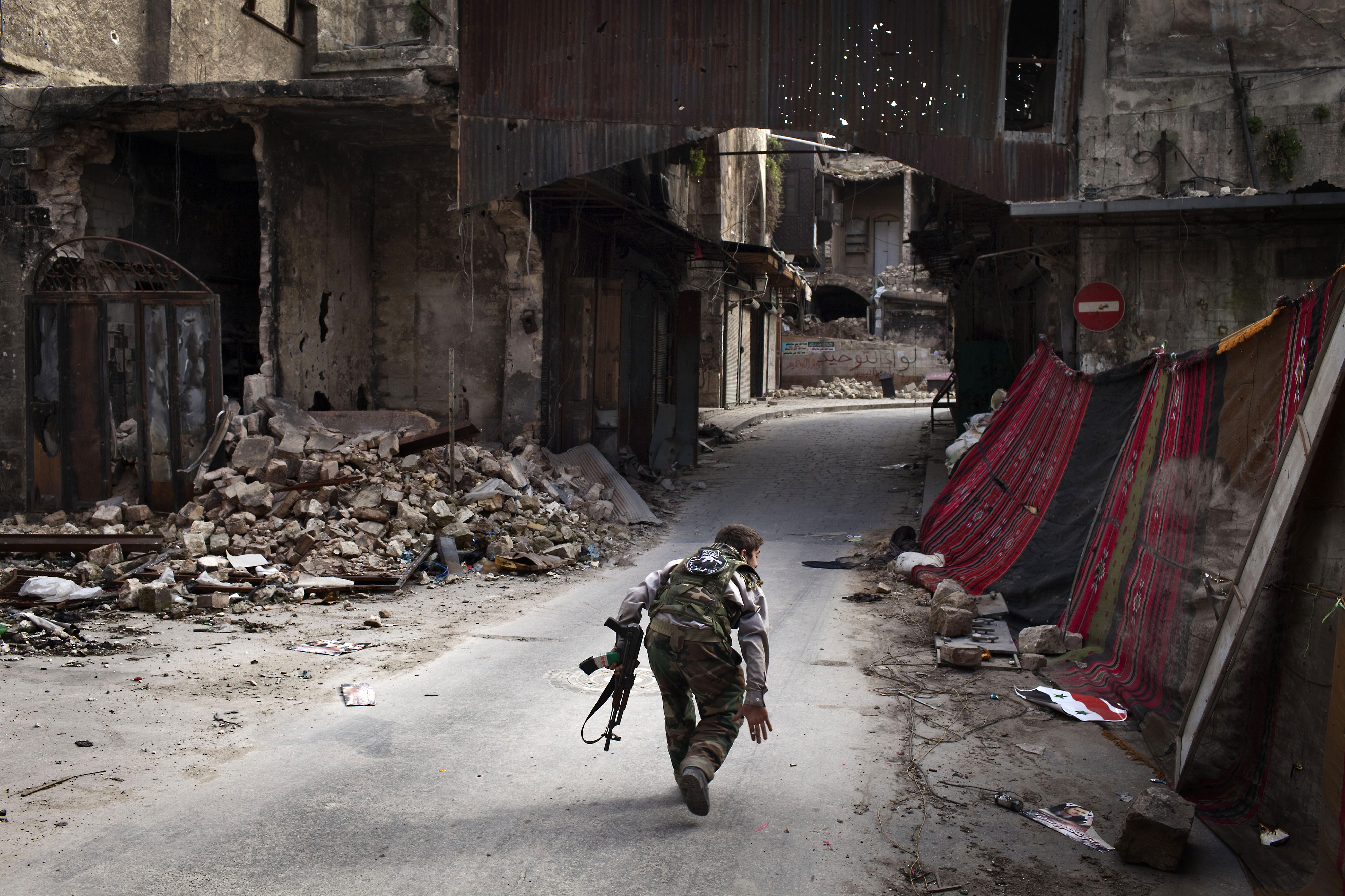 WASHINGTON Moved by the Assad regime's rapid advance, the Obama administration could decide this week to approve lethal aid for the beleaguered Syrian rebels and will weigh the merits of a less likely move to send in U.S. air power to enforce a no-fly zone over the civil war-wracked nation, officials told The Associated Press Sunday.

White House meetings are planned over the coming days, as Syrian President Bashar Assad's government forces are apparently poised for an attack on the key city of Homs, which could cut off Syria's armed opposition from the south of the country. As many as 5,000 Hezbollah fighters are now in Syria, officials believe, helping the regime press on with its campaign after capturing the town of Qusair near the Lebanese border last week.

A source confirmed to CBS News correspondent Margaret Brennan that U.S. officials believe they now need to "re-evaluate options," and will be doing so at the White House this week. Another source, close to the opposition, confirmed that arming the rebels would be discussed. It was not clear whether it would be covert, or overt arming. Also unclear was how quickly the U.S. would actually be able to deliver on any new pledge.

CBS News reported last week that the U.S. has not yet delivered non-lethal supplies promised to the rebels in late April. That delivery is "at least" weeks away, and will likely include trucks and communications gear. It will not include battlefield supplies like goggles or body armor, Brennan reports. Capitol Hill has not yet received official notification regarding that funding pledge of $123 million.

Opposition leaders have warned Washington that their rebellion could face devastating and irreversible losses without greater support, and the warnings are prompting the United States to consider drastic action.

Secretary of State John Kerry postponed a planned trip Monday to Israel and three other Mideast countries to participate in White House discussions, said officials who weren't authorized to speak publicly on the matter and demanded anonymity.

While nothing has been concretely decided, U.S. officials said President Barack Obama was leaning closer toward signing off on sending weapons to vetted, moderate rebel units. The U.S. has spoken of possibly arming the opposition in recent months but has been hesitant because it doesn't want to al Qaeda-linked and other extremists fighting alongside the anti-Assad militias to end up with the weapons.

Obama already has ruled out any intervention that would require U.S. military boots on the ground. Other options such as deploying American air power to ground the regime's jets, gunships and other aerial assets are now being more seriously debated, the officials said, while cautioning that a no-fly zone or any other action involving U.S. military deployments in Syria were far less likely right now.

The president also has declared chemical weapons use by the Assad regime a "red line" for more forceful U.S. action. American allies including France and Britain have say they've determined with near certitude that Syrian forces have used low levels of sarin in several attacks, but the administration is still studying the evidence. The U.S. officials said responses that will be mulled over in this week's meetings concern the deteriorating situation on the ground in Syria, independent of final confirmation of possible chemical weapons use.

Any intervention could have wide-reaching ramifications for the United States and the region. It would bring the U.S. closer to a conflict that has killed almost 80,000 people since Assad cracked down on protesters inspired by the Arab Spring in March 2011 and sparked a war that has since been increasingly defined by sectarian clashes between the Sunni-led rebellion and Assad's Alawite-dominated regime.

And it would essentially pit the United States alongside regional allies Saudi Arabia, Turkey and Qatar in a proxy war against Iran, which is providing much of the materiel to the Syrian government's counterinsurgency and, through Hezbollah, more and more of the manpower.

Syria's precarious position in the heart of the Middle East makes the conflict extremely unpredictable. Lebanon, across the western border, suffered its own brutal civil war in the 1970s and the 1980s and is already experiencing increased interethnic tensions. Iraq, to Syria's east, is mired in worsening violence. And Israel to the southwest has seen shots fired across the contested Golan Heights and has been forced to strike what it claimed were advanced weapons convoys heading to Hezbollah, with whom it went to war with in 2006.

Iran could wreak havoc in the region through its support of Shiite militant groups, and U.S. officials fear Iran may seek to retaliate for any stepped-up American involvement by targeting Israel or U.S. interests in the region. It's also unclear what American action would mean for relations with Russia, which has provided Assad with military and diplomatic support even as it claims that it working with the United States to try to organize a Syrian peace conference.

At the same time, it's unclear how Washington could fundamentally change the trajectory of a conflict that has increasingly tilted toward Assad in recent months without providing weapons to the opposition forces or getting involved itself.

The administration has been studying for months how to rebalance Syria's war so that moderate, pro-democracy rebels defeat the regime or make life so difficult for Assad and his supporters that the government decides it must join a peace process that entails a transition away from the Assad family's four-decade dictatorship.

But Assad's military successes appear to have rendered peace efforts largely meaningless in the short term. While Kerry and his Russian counterpart Sergey Lavrov have been trying to rally support for the planned conference in Geneva — first envisioned for May and since postponed until July at the earliest — even America's allies in the Syrian opposition leadership have questioned the wisdom of sitting down for talks while they are ceding territory all over the country to Assad's forces.

Beyond weapons support for the rebels, administration officials harbor deep reservations about other options.

They note that a no-fly zone, championed by hawks in Congress such as Sen. John McCain, R-Ariz., would require the U.S. to first neutralize Syrian air defense systems that have been reinforced with Russian technology and are far stronger than those that Libyan dictator Moammar Gadhafi had before the U.S. and its Arab and European allies helped rebels overthrow him in 2011. And unlike with Libya, Washington has no clear international mandate for authorizing any strikes inside Syria, a point the Obama administration officials has harped on since late 2011 to explain its reticence about more forceful action.

Homs has one of the biggest Alawite communities in Syria and is widely seen as pro-Assad. The rebels control the city center, however, with regime forces besieging them on the outskirts.

Many towns north of Homs also are rebel-controlled, while to the south Hezbollah-backed government forces have been clearing rebels from villages and towns. Fierce fighting there over the past three weeks has killed dozens of rebels, troops and Hezbollah fighters and wounded hundreds.

Seizing control of Homs would clear a path for the regime from Damascus to the Mediterranean coast, and firm up its grip on much of the country.