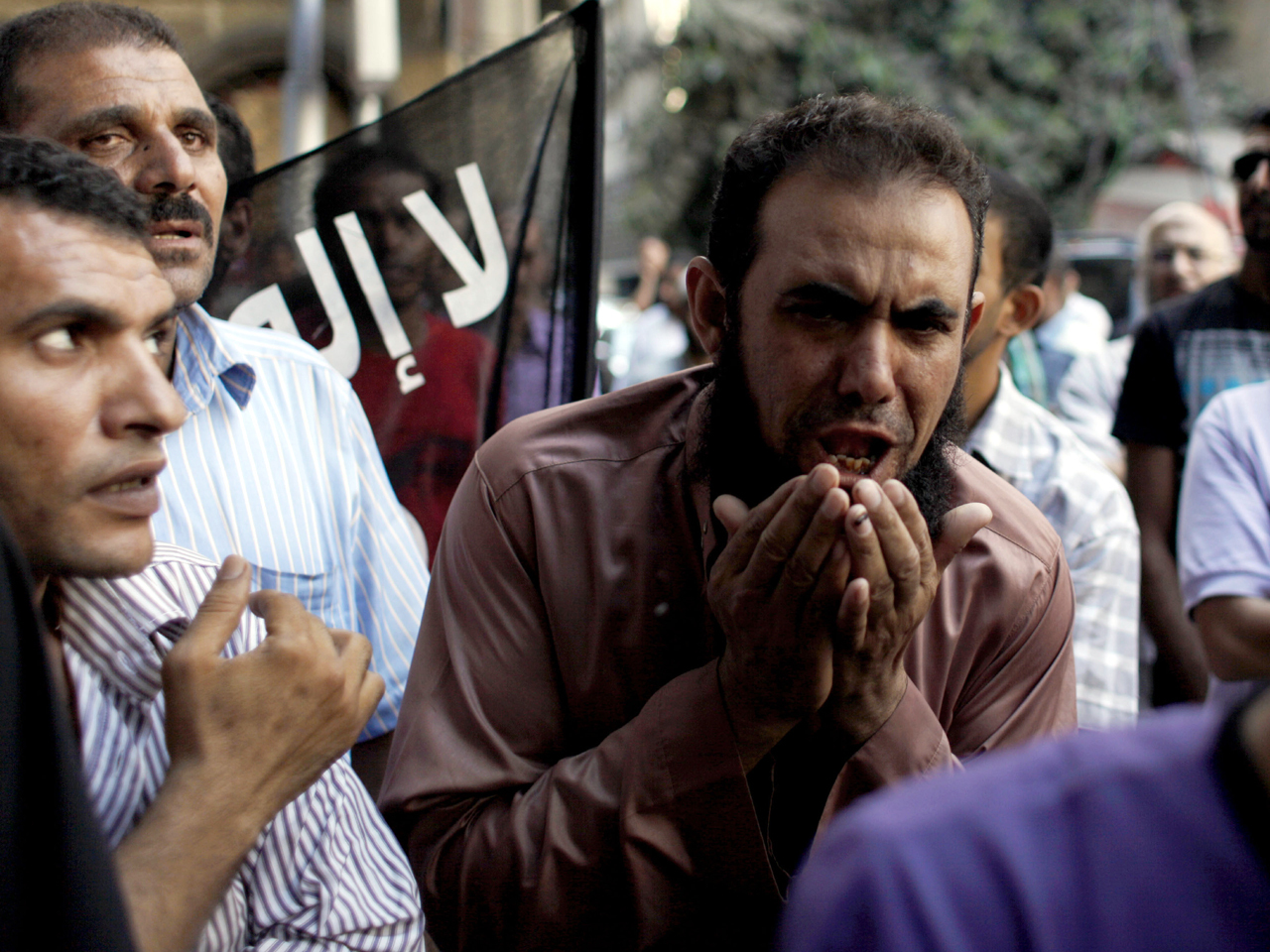 (CBS/AP) LOS ANGELES - A California-based filmmaker went into hiding after a YouTube trailer of his movie attacking Islam's prophet Muhammad sparked angry assaults by ultra-conservative Muslims on U.S. missions in Egypt and Libya. The U.S. ambassador to Libya and three American members of his staff were killed.

CBS News national security correspondent David Martin reports from the Pentagon that U.S. officials do not believe Tuesday's killings were the work of the mob. Instead, the officials believe that within that mob were heavily armed militants who were using the demonstration as a cover to get into the U.S. Consulate in the eastern Libyan city of Benghazi and then take as much revenge as they could on Americans.

Whether the militants were seeking revenge for the film or they were simply trying to kill Americans on the anniversary of the Sept. 11 attacks is still unclear, Martin reports.

Speaking by phone Tuesday from an undisclosed location, writer and director Sam Bacile remained defiant, saying Islam is a cancer and that the 56-year-old intended his film to be a provocative political statement condemning the religion.

Libyan officials said Wednesday that Ambassador Christopher Stevens was killed Tuesday night when he and a group of embassy employees went to the consulate to try to evacuate staff as the building came under attack by a mob firing machine guns and rocket propelled grenades.

Bacile said he is a real estate developer and an Israeli Jew. But Israeli officials said they had not heard of him and there was no record of him being a citizen. They spoke on condition of anonymity because they are not permitted to share personal information with the media.

In Egypt, protesters scaled the walls of the U.S. Embassy in Cairo and replaced an American flag with an Islamic banner.

"This is a political movie," Bacile told the AP. "The U.S. lost a lot of money and a lot of people in wars in Iraq and Afghanistan, but we're fighting with ideas."

Bacile said he believes the movie will help his native land by exposing Islam's flaws to the world.

"Islam is a cancer, period," he said repeatedly, his solemn voice thickly accented.

The two-hour movie, "Innocence of Muslims," cost $5 million to make and was financed with the help of more than 100 Jewish donors, said Bacile, who wrote and directed it.

The film claims Muhammad was a fraud. The 14-minute trailer of the movie that reportedly set off the protests, posted on the website YouTube in an original English version and another dubbed into Egyptian Arabic, shows an amateur cast performing a wooden dialogue of insults disguised as revelations about Muhammad, whose obedient followers are presented as a cadre of goons.

It depicts Muhammad as a feckless philanderer who approved of child sexual abuse, among other overtly insulting claims that have caused outrage.

Muslims find it offensive to depict Muhammad in any manner, let alone insult the prophet. A Danish newspaper's 2005 publication of 12 caricatures of the prophet triggered riots in many Muslim countries.

Though Bacile was apologetic about the American who was killed as a result of the outrage over his film, he blamed lax embassy security and the perpetrators of the violence.

"I feel the security system (at the embassies) is no good," said Bacile. "America should do something to change it."

A consultant on the film, Steve Klein, said the filmmaker is concerned for family members who live in Egypt. Bacile declined to confirm.

Klein said he vowed to help Bacile make the movie but warned him that "you're going to be the next Theo van Gogh." Van Gogh was a Dutch filmmaker killed by a Muslim extremist in 2004 after making a film that was perceived as insulting to Islam.

Bacile's film was dubbed into Egyptian Arabic by someone he doesn't know, but he speaks enough Arabic to confirm that the translation is accurate. It was made in three months in the summer of 2011, with 59 actors and about 45 people behind the camera.

The full film has been shown once, to a mostly empty theater in Hollywood earlier this year, said Bacile.