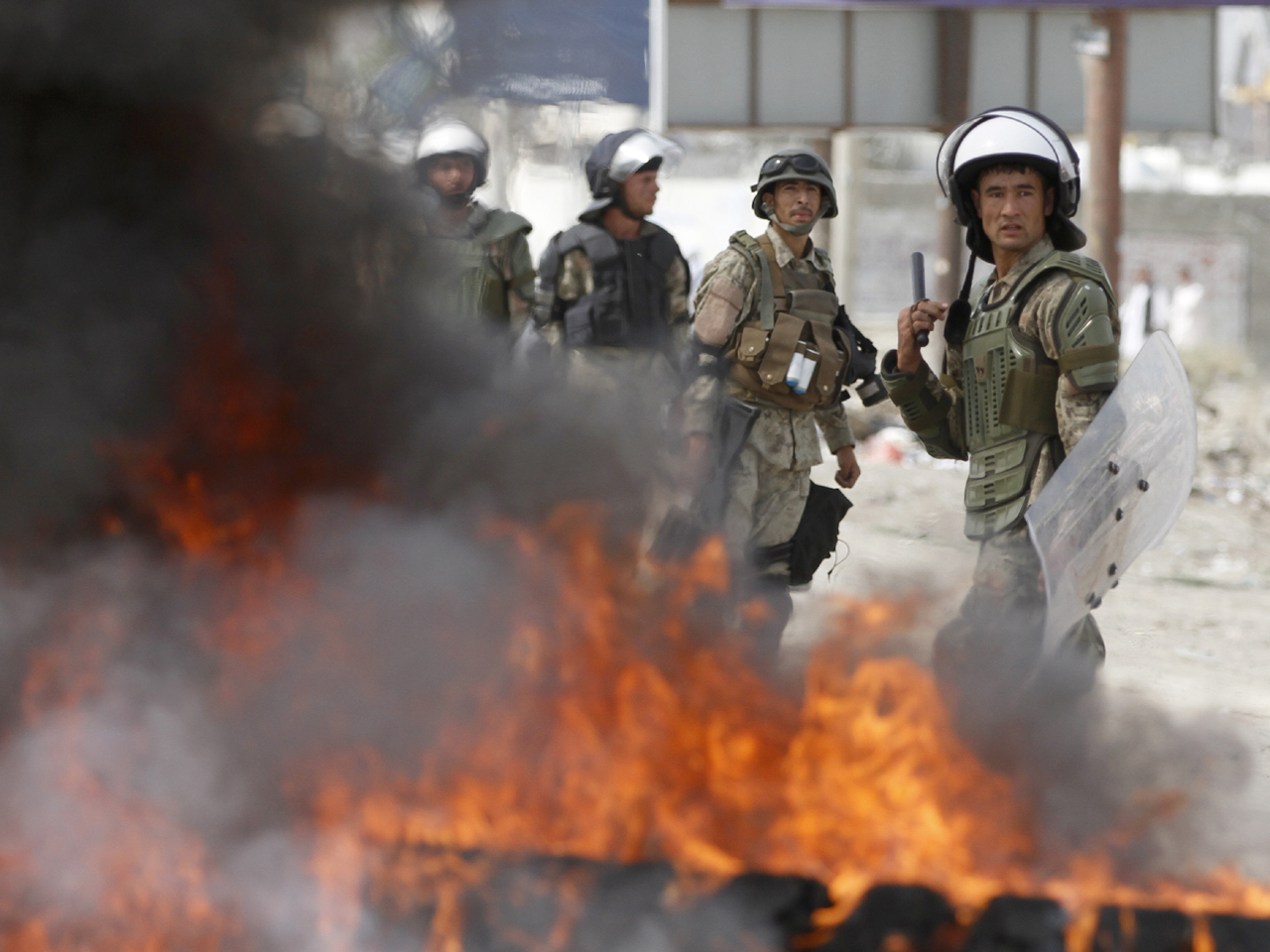 (CBS/AP) - There were violence protests at a U.S. military outpost near the Afghan capital Monday after a weekend of bloodshed that left at least six American troops dead - four of them in the latest apparent "insider attack" by Afghan defense forces.

Kabul police chief Lt. Gen. Ayoub Salangi tells CBS News that about 1,000 demonstrators gathered in front of Camp Phoenix, a U.S. base on the outskirts of Kabul. The crowd, the latest rallying against an anti-Islamic movie apparently produced inside the U.S., chanted anti-U.S. slogans and began throwing stones at the U.S. base.

The air was thick with smoke on the Jalalabad road - a main thoroughfare into the city center where the crowd burned shipping containers and tires. Sirens wailed as fire engines rushed to the scene. At least one police vehicle was burned by the mob, according Daoud Amin, the Kabul provincial police chief.

Salangi says shots were fired by some members of the protest group, but that nobody was known to have been wounded by the gunfire. The police never opened fire, he says. Salangi says about 40 police officers received minor injuries in the stone throwing before the crowd dispersed.

The scuffles in the Afghan capital came after a bloody weekend that saw a renewal of the so-called "insider attacks" on Western forces by their Afghan partners, and an apparently misguided NATO airstrike on an alleged militant target which left at least eight Afghan women and girls dead.

Four American and two British troops were then killed in two separate insider attacks. On Saturday, a gunman in the uniform of a government-backed militia force shot dead two British soldiers in Helmand district in the southwest.

On Sunday, an Afghan police officer turned his gun on NATO troops at a remote checkpoint in the southern province of Zabul, killing four American service members, according to Afghan and international officials.

This year has seen a sharp rise in insider attacks in Afghanistan. A total of 36 incidents have left 51 coalition troops dead, including 32 Americans. Friday's attack on Camp Bastion is not counted in this tally, as there is no indication the insurgents who were dressed in U.S. uniforms had help from Afghan security personnel at the sprawling base.

U.S. Defense Secretary Leon Panetta said Monday that while he is very concerned about rogue Afghan troops and police turning their guns on U.S. and allied forces, he sees the insider attacks as the "last gasp" of a Taliban insurgency that has not been able to regain lost ground.

Dempsey on Sunday called the escalating insider attacks a "very serious threat" to the Afghanistan campaign.

Dempsey vowed that something has to change in order to address the escalating problem, and he suggested that the Afghans need to take the matter as seriously as the Americans do.

The spike in insider attacks is souring the relationship between NATO troops and the Afghan forces that they are training and fighting alongside. But military and defense leaders have insisted that these attacks are not hampering the war effort, and that it will not impact the plans to have combat troops out of Afghanistan by the end of 2014.

The U.S. is expected to announce in the next day or two that it has completed the withdrawal of the 33,000 troops ordered into the fight as part of a military surge three years ago.

With those troops gone, the U.S. will have 68,000 forces on the ground in Afghanistan.

"We're all seized with (the) problem," said Dempsey, after discussing the issue at a meeting in Romania with NATO officials. "You can't whitewash it. We can't convince ourselves that we just have to work harder to get through it. Something has to change."

There have been new measures implemented, including greater cooperation between U.S. and Afghan intelligence units to try and root out disgruntled Afghan forces before they turn their guns on their partners. All Afghan troops are to be re-screened and vetted for potential signs of a grudge against Western troops, and a joint NATO-Afghan campaign to educate both sides of cultural differences was announced last week.

Thus far, the measures taken seem to be having little measurable effect on the daunting challenge posed by the insider attacks.