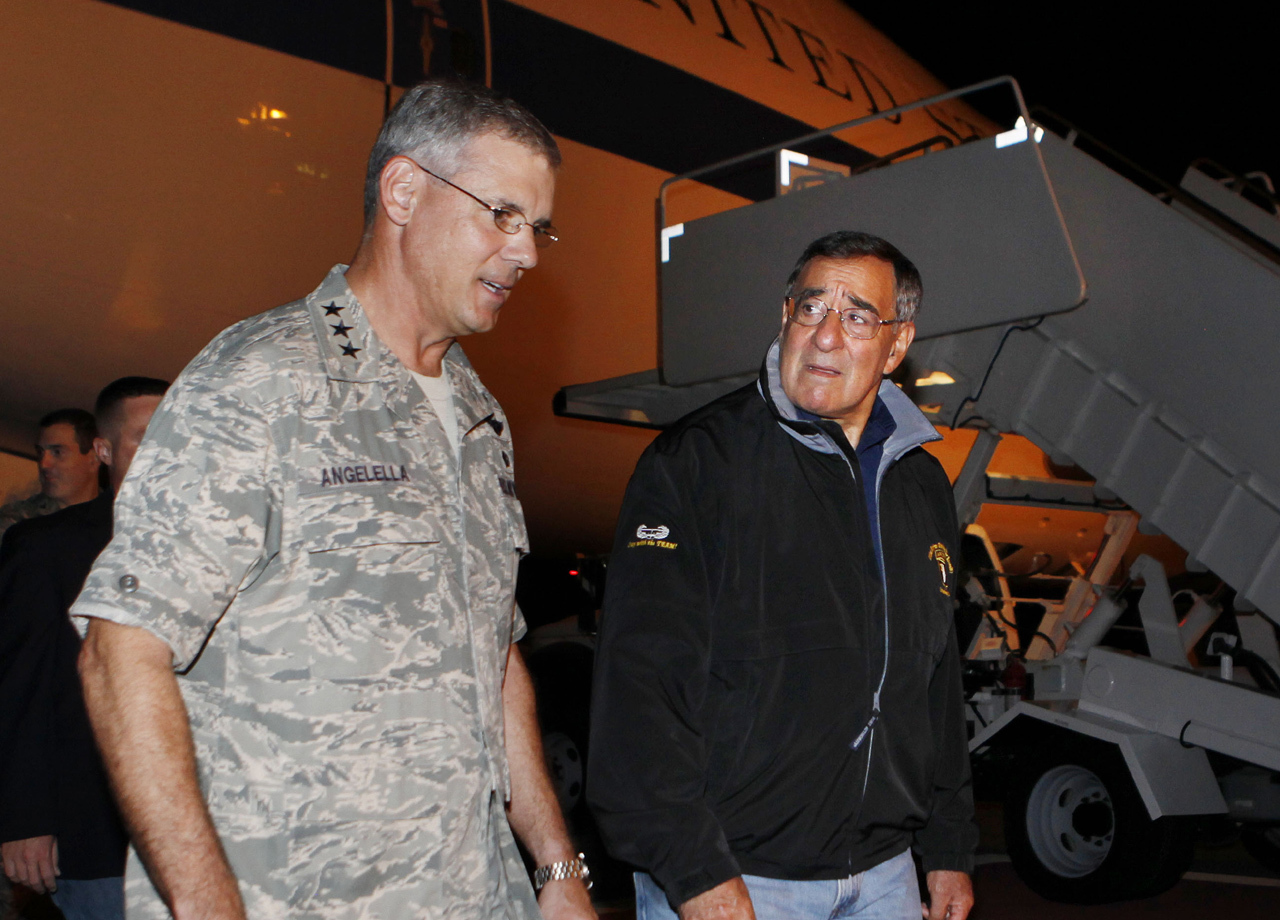 (AP) ABOARD A US MILITARY AIRCRAFT - U.S. Defense Secretary Leon Panetta says the turmoil raging across the Muslim world is likely to continue into the days ahead, but he says the violence expected by the U.S. appears to be leveling off.

He said the Pentagon has "deployed our forces to a number of areas in the region to be prepared to respond to any requests that we receive to be able to protect our personnel and our American property."

He declined to provide more details on reports that the military may be moving additional military forces so they can respond to unrest in any of a number of regions of concern.

"I think our approach right now is to not do anything until we've been requested to do it by the State Department," Panetta told reporters traveling with him to Asia. But he noted that, "I think that we have to continue to be very vigilant because I suspect that ... these demonstrations are likely to continue over the next few days, if not longer."

Protests by furious Muslims erupted in countries around the world in recent days, with some spawning violence and even deaths over an anti-Islam video shot in California that denigrates the Prophet Muhammad. In places like Libya, Sudan and Tunisia, protesters stormed U.S. embassies, and an American fast food restaurant was burned in Lebanon.

In response, the Pentagon dispatched elite Marine rapid response teams to Libya and Yemen, but a team deployed to Khartoum on Friday was turned back when the Sudanese government objected.

Asked about Sudan's decision, Panetta said host countries have the right to reject such military deployments.

"My understanding is that they felt that they could provide sufficient security to be able to protect our embassy and our personnel there," said Panetta. "And you know, in many ways, as all of you know the primary responsibility for protecting embassies rests with the host country."

Known as a fleet antiterrorism security teams, the units were sent in response to violent protests in Khartoum where protesters tried to climb the walls of the U.S. Embassy, setting off a battle with police.

The Navy also moved two warships to positions off the coast of Libya. The two destroyers are largely meant as a show of force, but they carry Tomahawk missiles and can also be available for evacuations or other missions as needed.

The intensity of the anti-American fervor initially caught U.S. leaders by surprise, but in the last several days the Obama administration has deployed military units to shore up security in hotspots, and used diplomacy to call for calm and urge foreign governments to protect American interests in their countries.

It also has been unclear how much of the violence was spontaneously triggered by the film and how much of it was spurred on by anti-American militants using it as a tool to grow and enrage the crowds.

The al-Qaeda affiliate in Yemen praised the killing of the U.S. ambassador in Libya in an online statement Saturday and called for more attacks to expel American embassies from Muslim nations.

Chris Stevens, the U.S. ambassador to Libya, was killed Tuesday along with three other Americans, as violent protesters stormed the consulate in Benghazi. President Barack Obama has vowed that the attackers would be brought to justice, but has also stressed that the U.S. respects religious freedom.

The protests were set off by a low-budget, crudely produced film called "Innocence of Muslims," which portrays Muhammad as a fraud, a womanizer and a child molester. A 14-minute excerpt of the film, which is both in English and dubbed into Arabic, has been available on YouTube, although some countries have cut access to the site.

Panetta was traveling to Asia, where he will visit Japan, China and New Zealand.

His visit comes amid escalating tensions in the region including tussles over several disputed islands in the East China Sea. It is Panetta's third trip to the region in the last 11 months, reflecting the Pentagon's ongoing effort to put a greater military focus on the Pacific region.