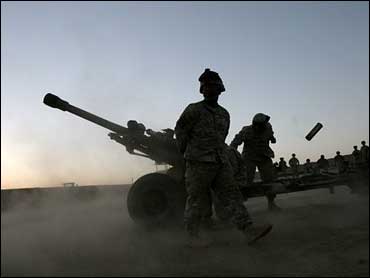 The offensive was launched in support of Operation Mountain Thrust, the largest anti-Taliban military campaign undertaken since the former regime's 2001 ouster in an American-led invasion.

Extremist forces, primarily Taliban, have been stepping up attacks against coalition and Afghan troops, particularly in the south, in the bloodiest campaign of violence launched since 2001.

On Friday, Taliban militants attacked a coalition patrol in southern Uruzgan province, forcing troops to retreat to a nearby compound to fire back with mortars and call in air support, said coalition spokesman Maj. Quentin Innis. No soldiers were hurt, although it was unclear whether there were any casualties among the militants.

A coalition convoy also was ambushed in nearby Zabul province but no casualties were reported, he said.

The Paktika mission began Wednesday with an airstrike near the village of Orgun-e, the military said. Ground forces that moved in encountered "numerous well-fortified and concealed fighting positions manned by aggressive fighters."

One coalition member was wounded, said Fitzpatrick, but he declined to say which nationality. A militant wounded during the gunbattle was also captured.

On Wednesday, Paktika's provincial governor told The Associated Press that 26 militants had been killed by Afghan and coalition soldiers during initial stages of the operation.

Operation Mountain Thrust, involving more than 10,000 U.S.-led troops, aims to quell the Taliban resurgence and prepare the ground for the imminent takeover of military control by NATO-led forces.

"It's a sign of the fact that the Taliban have never gone away," says CBS News chief foreign correspondent Lara Logan. "They were heavily defeated, but they stayed in the area, and they will always come back year after year."

U.S., Canadian, British and Afghan troops have fanned out over the restive provinces of Helmand, Uruzgan, Kandahar and Zabul to hunt down Taliban fighters blamed for the surge in ambushes and bombings.

In Kandahar, the local Afghan army commander said the Taliban militants, who are believed to be hiding in rugged southern mountain ranges, will not be able to withstand the coalition and Afghan onslaught.

Operation Mountain Thrust began in mid-May with limited attacks and raids launched by coalition forces. But its main phase opened Thursday and is expected to expand in the coming days.

"We have had small operations in all the provinces but the huge operation has not started," Roufi said. "Our goal is to clean up the enemy and bring security, stability."

In an example of the persistent Taliban threat, militants blew up a bus carrying Afghan workers to a coalition military base Thursday in the southern former Taliban stronghold of Kandahar, killing seven.

"It's the first time Afghans working here have been deliberately targeted by the Taliban. These are local guys trying to support their families," Innis said.