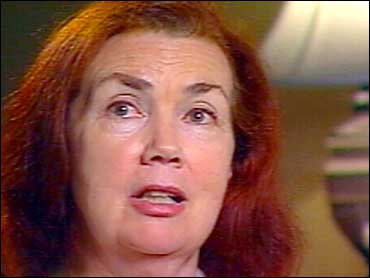 It's been nearly 18 months since Robert Stevens died of inhalation anthrax in a Florida hospital. Four more deaths followed as anthrax-laced letters turned up at postal facilities along the East coast and even on Capitol Hill.

Now the Stevens family has filed a $50 million claim against the government — alleging the anthrax that killed Robert came from government facility that failed to secure the deadly organism.

Maureen Stevens sat down with Early Show National Correspondent Thalia Assuras and spoke about her husband and the circumstances of his death.

The world knew him as the first person in a generation to die of inhalation anthrax. But his widow, Maureen Stevens, wants him to be known for more than that.

"They called him Bob, to me, he was Robert. Everybody called him Bob," says Mrs. Stevens. "He was healthy, loved the outdoors … He was a very loving father and grandfather. The children and the grandchildren miss him, and they're still waiting to go fishing with grandpa."

Mrs. Stevens says she hasn't comprehended the fact that her husband was a victim of bio-terrorism. Today, the anthrax scare is still a mystery. Stevens was a photo editor at American Media, a tabloid publishing company in Boca Raton, Fla.

"They get strange letters sometimes, and the consensus seems to be that if Robert wasn't wearing his glasses and if it was something funny, he would hold the letters up to his face," says Mrs. Stevens. "They think perhaps that's how he got it. Just bad luck."

On a trip to North Carolina, Mrs. Stevens says her husband became flushed and feverish. His condition worsened on the drive back to Florida.

"He just couldn't get warm," she recalls. "He was wearing a jacket, but he was just shivering."

Two days later, Steven was in the hospital fighting for his life.

"They did a lot of tests and everything came back negative," says his wife. "And I was thinking, 'We're home free.' I really did. And they said, 'There's one more test, a spinal tap.'"

The early diagnosis was meningitis.

"It's bad, but I thought it was something you could get over," says Mrs. Stevens.

But the final diagnosis was inhalation anthrax. A day later, on Oct. 5, 2001, Bob Stevens died.

"We were getting near the retirement years," says Mrs. Stevens. "We were planning to do things. We wanted to go back to Paris. We wanted to do so much, and that's all been taken away, and his children have had so much taken away. You know, no walking down the aisle with their father. So, this has affected us in so many ways."

Now, the family is seeking compensation from the government and looking for answers.

"The labs had the [anthrax]," says Steven. "It went missing, and they know it went missing a number of years ago. I can't imagine how they can't decipher, you know, what happened at the time."

Robert Schuler, the lawyer for the Stevens family, says they and the nation need to know what happened. They want answers to why 22 people were diagnosed with inhalation or skin anthrax. He claims the anthrax spores were spirited out of a federal biological warfare facility.

"The bottom line is that there was a failure of security at Fort Detrick or one of the laboratories that Fort Detrick had sent anthrax to — allowing anthrax to be lost or to be obtained from that facility and used in a terrorist attack," says Schuler.

Maureen Stevens says faith, family and friends have helped her during the hard times, but it took a long time to comprehend that her husband of almost 30 years would never come home.

"I still expected him at a quarter of six every day to come in the door [with] a big smile and get a cold beer," says Stevens. "He was just unbelievable and I miss him."

Answers have yet to be answered and arrests haven't been made. So the mystery of why Bob Stevens and four other died of anthrax in the fall of 2001 continues.