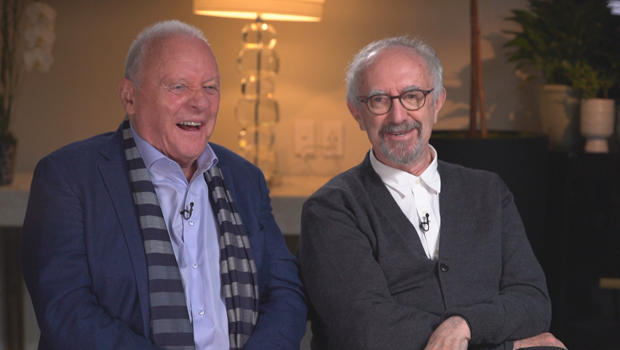 In 2013 the unthinkable happened: 85-year-old Pope Benedict XVI, who said he was too old and frail to continue in the job, resigned and flew off to retirement. And a few days later, something else that was once-unthinkable rocked the Vatican: Cardinal Jorge Bergoglio, of Argentina, became Francis, the first pope ever from the New World.

For the first time in six centuries, the Catholic Church had two living popes.

Anthony Hopkins as Benedict: "You know, there's a saying that God corrects one pope by presenting the world with another pope.  I'd like to see my correction."

It's anyone's guess if the two men met, or what they might've talked about, while it was all happening. But a new Netflix film is filling in the blanks. In "The Two Popes," we hear what those conversations might have been, based on both men's speeches and writings. And since they disagreed on almost everything, not all of that conversation is polite.

Jonathan Pryce, who's been said to look a lot like the real Pope Francis, plays him in the movie; Sir Anthony Hopkins plays Benedict.

Correspondent Tracy Smith sat down with the two actors, and asked Pryce, "You did say to me, Jonathan, that you were nervous the first time you were on set with Tony?"

"Shush. Don't tell him!" he replied. "Don't let him know that I was nervous of him!

"No, I was. I mean, you know, you're nervous about any actor you're working with, but I was especially -- I've been a fan of Tony's for a long time."

Truth is, Pryce slipped rather easily into the role, as Smith learned when they met up at the Met Cloisters, a medieval arts museum in New York. It's not quite the Vatican, but the Fuenteduena Chapel there has a certain celestial majesty all its own.

She asked, "When you were first asked to play the pope, what'd you think?"

"Well, the day he was created pope, the internet was full of images of the both of us next to each other recognizing the likeness, and even one of my sons called and said, 'Daddy, are you the pope?'"

He's not, of course, but for two hours, he seems to get pretty close.

Pryce, a respected stage actor who's also been in more than five dozen films, says he still gets stopped on the street for the 1985 cult classic, "Brazil." "I get people saying it changed their lives, seeing that film," he said.

Smith said, "You know, I'm curious, because you are widely seen as one of the finest Shakespearean actors of our time, how you reacted when Disney came to you and said 'We'd like for you to be in a movie that's based on an amusement park ride.'"

And if you're wondering how Pryce could be happy in the studio franchise "Pirates of the Caribbean" – wearing a wig, no less – it might be the advice he got years ago over lunch with legendary acting coach Lee Strasberg. "So, I said, 'Mr. Strasberg, I'm doing this show on Broadway. I've never done anything for weeks and months on end. What advice can you give me?' And he had his sandwich in his hand, and he said, 'You do it. [takes bite] It's your job.'"

And now, in "The Two Popes," it's Pryce's job to face off against the intimidating Anthony Hopkins.

When asked if he felt he could relate to Benedict," Hopkins said yes.

But he sure doesn't act old: when he's not out shooting movies, Sir Anthony, who turns 82 this month, is an avid painter, and he showed Smith one of his favorites.

You might say Hopkins has a knack for creating indelible images. In a storied career he's probably best known for his Oscar-winning role as an especially hungry villain, in "The Silence of the Lambs."

Smith asked, "You knew Hannibal Lecter was the part of a lifetime when you read the script?"

"Yeah, I knew it was one of those showy parts, yeah. I didn't know how," he said.

"What's your relationship with that character now?"

"Nothing. I've forgotten all about it."

"You've forgotten? But people must constantly …"

"Oh, they want me to do the (makes noise)," Hopkins said. [As in, "I ate his liver with some fava beans and a nice chianti."]

And for Hopkins, the 1991 role came at just the right time: "Somebody said, 'Why did you do that part?' I said, 'Well, it pays the bills.' And I remember my mother being very ill. Paid for her hospital bills."

Benedict: "You know, the hardest thing is to listen, to hear His voice, God's voice."

On screen and off, it seems faith comes easily to Hopkins, or at least it does now.

Smith asked, "Did this affect how you see the divine doing this movie? Did it make you look at religion differently?"

"Yes. I used to be, let's say, a non-believer. Nothing wrong with that; I didn't believe in anything. Except I was in a lot of mental and emotional pain, drinking too much and all that stuff."

But Hopkins said he got sober in 1975 after a chat about God with someone from AA, and he now believes that his sobriety took more than just his own willpower, a lot more: "Suddenly the craving to drink vanished. It was vacuumed out of me, just vanished. And [I had a] sense of well-being for the first time in my life. I was about to turn 38 years of age – 38, that was 44 years ago, almost."

"So, do you think that when you were 38 and you were able to just quit drinking, was that divine intervention?"

While the film does deal briefly with the abuse that's rocked the Catholic Church, at its heart "The Two Popes" is about rivals hashing out their differences. And maybe that's the point: sometimes even the most unlikely partners can end up finding some kind of harmony.

To watch a trailer for "The Two Popes" click on the video player below:

Actor Jesse Plemons on "The Power of the Dog"
More