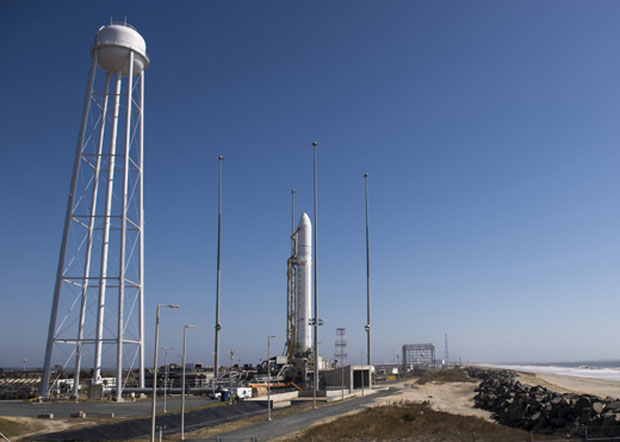 WALLOPS ISLAND, Va. The maiden flight of a powerful new rocket designed to loft space station cargo ships into orbit was called off 12 minutes before liftoff Wednesday when an umbilical attached to the booster's second stage somehow pulled away earlier than planned. It was not immediately clear when the rocket's builder, Orbital Sciences Corp., would be ready for another launch attempt.

The countdown had proceeded smoothly throughout the day with no technical problems of any significance. An initially gloomy weather forecast improved dramatically as the day wore on and the rocket was on track for launch at 5 p.m. EDT (GMT-4).

But the unexpected umbilical separation interrupted the countdown.

"LC, we've had a premature separation of the umbilcal on stage two so we're going to have to abort for the day," an engineer said on the countdown audio loop.

The scrub was a disappointment to Orbital Sciences engineers who have spent the past six years designing, assembling and testing the two-stage Antares rocket. But company managers took the delay in stride.

"You learn a little bit from every launch attempt," said John Steinmeyer, an Orbital project manager. "We'll take the lessons learned today and move into another launch attempt as soon as it's safe to do so."

The Antares is the most powerful booster in Orbital's inventory and the largest rocket ever built for launch from the MARS/Wallops complex. NASA is counting on the new rocket to help ensure steady delivery of supplies and components to the International Space Station in the wake of the shuttle's retirement.

For the rocket's initial test flight, a heavily instrumented mockup of the company's Cygnus cargo ship was mounted in a protective nose cone. Assuming the test flight goes well, Orbital plans to launch a real Cygnus atop an Antares in mid June to deliver about a ton of supplies and equipment to the space station.