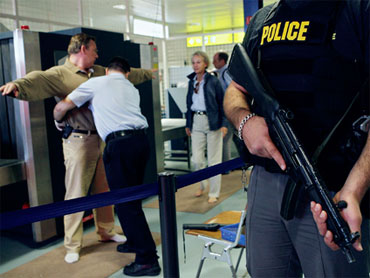 4-year-old Ryan Thomas is developmentally disabled as a result of being 16 weeks premature and has to wear corrective braces. His ankles are malformed and his legs have little or no muscle tone. He only just learned how to walk, briefly, on his own, according to thePhiladelphia Inquirer.

But that didn't seem to matter to the Transportation Security Administration screeners at Philadelphia International airport.

It was Ryan's first trip to Disney in March 2009, according the paper's columnist Daniel Rubin. All was going well for the Thomases -- they had gotten to the airport with hours to spare before their flight, but as it turns out, they would need that extra time.

Ryan's father was breaking down his son's stroller to put it on the conveyor belt as his wife, Leona, walked Ryan through the metal detector. As expected the alarm went off and Leona tried to explain the situation, the paper said.

The screener replied that the boy would have to take the braces off and walk through the detector again. When Leona Thomas attempted to walk with Ryan she was told he would have to do it alone.

She tried, calmly, to explain that Ryan could barely walk with the braces, let alone without them, but the compassionless screener was deaf to her pleas, according to the newspaper.

Meanwhile Bob Thomas was getting increasingly agitated. He is an officer in Camden's emergency crime suppression team, so he understood the need for security, but this was overkill, he told the Philadelphia Inquirer.

The Thomases eventually complied and Ryan made it through on his own, but Bob immediately asked for a supervisor. The supervisor was less than sympathetic and stood by the screener's actions. A fellow police officer even told Bob Thomas to drop it and go enjoy his vacation.

But Bob Thomas didn't forget and after his trip he called the airport manager. Eventually, with help from Philadelphia Inquirer columnist Daniel Rubin, the TSA finally responded to the incident saying that the boy never should have had to remove his braces and they would be looking into what went wrong that day in March.

For the Thomases that probably feels like too little too late.