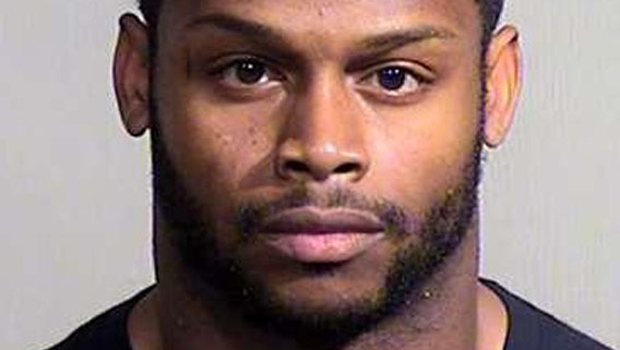 On July 21, Phoenix police were called to the home and were met at the door by the victim who denied there was anyone else in the home. She indicated she was in an argument on the phone. The officers left. Police later learned Dwyer was hiding in a bathroom at the home, Crump said.

On July 22, the victim tried calling 911 during a second incident, but Dwyer allegedly grabbed the cell phone and threw it from the second floor of their home to keep her from calling police, according to Crump. He also said after the alleged physical altercation, Dwyer threw a shoe toward the child.

In the wake of the alleged attacks, the victim, whose name hasn't been released, left the state with their child, Crump said.

The victim, still living out of state, contacted Phoenix police Sept. 11 with details about the injuries suffered during the alleged attacks. She alleged Dwyer has sent her a photo of a knife and also described threatening text messages she had received from Dwyer.

"Most of them were indicating he was going to harm himself because of what was going on," Crump said.

Crump said Dwyer admitted to the incidents but denied any physical assaults.

A search warrant was being served Wednesday at his home.

As he was escorted into the Maricopa County Jail, Dwyer kept his head up and said nothing. He wore a black T-shirt with white lettering that read "propaganda obey."

The Arizona Cardinals released the following statement in the wake of Dwyer's arrest:

"We became aware of these allegations this afternoon when notified by Phoenix police and are cooperating fully. Given the serious nature of the allegations we have taken the immediate step to deactivate Jonathan from all team activities. We will continue to closely monitor this as it develops and evaluate additional information as it becomes available."

Wednesday's development comes as the NFL is embroiled in several off-field incidents. Minnesota Vikings running back Adrian Peterson has been indicted in suburban Houston with felony child abuse after allegedly swatting his 4-year-old son with a wooden switch.

And former Baltimore Ravens running back Ray Rice has appealed his indefinite suspension for an alleged domestic violence incident involving his then-fiancee at an Atlantic City casino in February.

According to the Arizona Cardinals' website, Dwyer originally entered the NFL as a sixth-round pick (188th overall) of the Pittsburgh Steelers in the 2010 NFL Draft.

He signed a one-year contract with the Cardinals as an unrestricted free agent March 12, 2014.