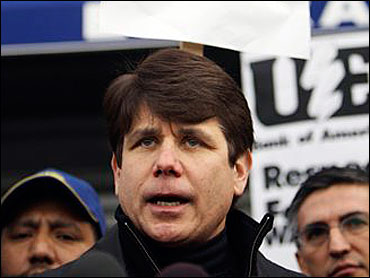 How'd you like to start your day that way? Can only get better from there, right? Wrong. By mid-morning Illinois Republicans were demanding that Blagojevich resign from his post and Democrats were fearful that the faltering executive still had the constitutional power to appoint a successor to take over Barack Obama's U.S. Senate seat. One over-zealous journalist even asked me what the law would say if Blagojevich had appointed himself to the Senate while he was in the police car on his way to court. Thankfully, the governor didn't.

The indictment of a sitting governor always is big news. What is striking about the bribery and corruption indictment of Gov. Blagojevich is how detailed are the charges against him and how incriminating are the wiretapped conversations that allegedly took place between the elected official and his bag men. Presumption of innocence aside, it will be very difficult for Blagojevich and his attorneys to explain away to jurors the direct quotes attributed to him in the complaint. They are so foul that they read like passages from some cosmic book of cynicism. No wonder Blagojevich faces up to 30 years in prison.

Here is the sitting governor, on the telephone, proclaiming that "he will make a decision on the Senate seat 'in good faith but it is not coming for free… it's got to be good stuff for the people of Illinois and good for me.'" Here is the sitting governor asking his aides to bone up on cabinet positions and private foundations (the Red Cross was mentioned) so that they would have ammunition to use during the negotiations (read: bribes) over the vacant seat. Here is the sitting governor saying: "I've got this thing and it's f---ing golden, and, uh, uh, I'm just not giving it up for f---in' nothing. I'm not gonna do it."

This is Citizen Kane stuff. This is Robert Penn Warren's masterwork: "All The King's Men." It's the dark side of Spencer Tracy in "The Last Hurrah." Every cliché and preconceived notion that people have about politics in general, and Illinois politics in particular, is supported by the 76-page complaint filed in federal district court by U.S. Attorney Patrick J. Fitzgerald, the country's modern-era Eliot Ness. And all this in a state whose last governor, George Ryan, was himself convicted and sentenced to prison on corruption charges. One Chicago Tribune journalist remarked Tuesday that Blagojevich makes Ryan look like a minor leaguer. Nice.

In light of all this, how would you like to be the current governor's attorneys sometime next year trying to seat an impartial jury anywhere in the Land of Lincoln? Heck, even Lincoln himself in his younger days as a lawyer wouldn't be expected to dig Blagojevich out of this hole. Ask the now-disgraced (and defeated) senator from Alaska, Ted Stevens, how easy it was for his attorneys to explain away his incriminating statements, recorded on tape, that were played before his jury a few months ago in Washington. Short of a legitimate confession, or actual videotape of a crime, audiotapes are perhaps the most powerful evidence prosecutors can offer in these sorts of cases. And the feds here apparently have a ton of tape.

Trying to get editorial page writers fired by pressuring publishers? Check. Trying to sell a Senate seat vacated by the incoming President of the United States? Check. Stoically engaging in bribery while you already are under investigation for same? Check. Publicly daring people to tape your conversations one day before you are arrested based upon taped conversations? Check. Somewhere, Gary Hart is smiling. He's now off the hook for his "Monkey Business." It's amazing that people this stupid - there is no presumption of innocence over that - can so consistently reach such high places in politics.

With the legal bomb hereby exploded, expect politics to take over the story for a few days. The governor will make bail, his attorneys will say all the right things about not judging the case too quickly, and pre-trial motions and hearings will soon dominate. In the meantime, however, there will be a ton of more momentous political movement. Will the state legislature try to take away Blagojevich's right to appoint the Obama successor? Will the state courts intercede? Will we see an impeachment proceeding there? And how will the machinations in Illinois impact the Senate itself and the Democrats who now control it?

The answers to those questions will come soon enough. For now, we are left again with Fitzgerald, once more at the center of tantalizing case at the intersection of law and politics and greed and corruption. Over and over again during his press conference - the closest we'll come to a "perp walk" for this white-collar defendant - Fitzgerald talked about the need for regular people to stand up to the sort of corruption alleged here. If the Blagojevich case ever makes it to trial, those "regular people" will certainly get their chance. I don't like the governor's odds. Can you tell?

If confirmed by the Senate, Alejandro Mayorkas, the son of Cuban refugees, would lead a department facing a host of serious issues, both inside and outside the U.S.