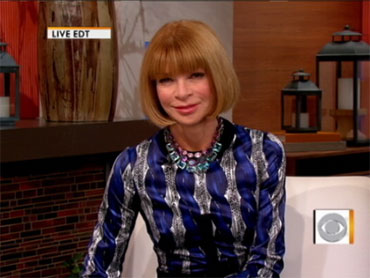 On Friday, stores in more than 100 cities across the nation and in 16 countries participated in the world's largest celebration of fashion, Fashion's Night Out 2010, the global initiative celebrating fashion while boosting the retail industry.

Tonight at 10/9c on CBS, viewers will be able to get an exclusive, behind-the-scenes look at all the hard work that went into pulling off the big event when actor Neil Patrick Harris hosts "The Making Of Fashion's Night Out 2010".

Vogue Editor-in-Chief Anna Wintour sat down with "Early Show" co-anchor Erica Hill to discuss what inspired her to start FNO, the incredible amount of work that goes into planning such an initiative, and the amazing turnout it drew: