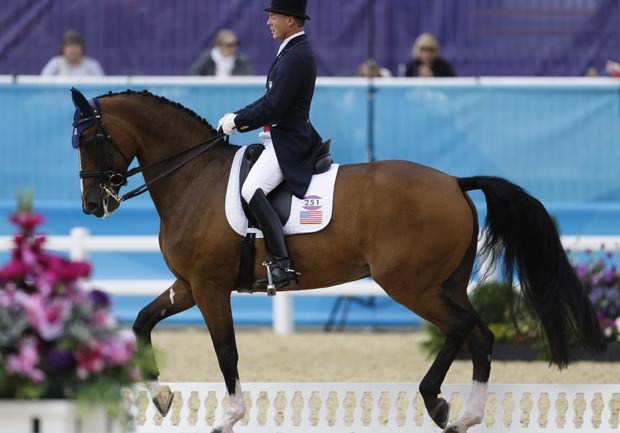 (AP) LONDON - Ann Romney said Thursday her horse Rafalca "thrilled me to death" with a solid performance at the Olympics, where the U.S. presidential campaign crossed paths with the equestrian sport of dressage at Greenwich Park.

The 15-year-old, German-bred mare has been the source of political jokes and Democratic ads questioning how U.S. Republican presidential candidate Mitt Romney can presume to know the problems of ordinary Americans when he inhabits the rarefied world of dressage.

Romney's wife Ann was in the VIP section of the equestrian stadium for Rafalca's Olympic debut, watching literally from the edge of her seat as the mare completed the 7-minute Grand Prix test. At the end, she gave horse and rider Jan Ebeling a standing ovation and a wave. Their score of 70.213 put them in provisional eighth place, though many riders still had yet to compete.

The stadium was nearly full.

"She was consistent and elegant," Romney told The Associated Press. "She did not disappoint. She thrilled me to death."

Ebeling, too, was upbeat about the performance.

"She felt really strong and is peaking at the right time," he said. "She was amped up, a little stronger than usual. She had more oomph. The trick is to manage that."

He said he hadn't spoken to either Romney before the competition — he never does — but said her final words of advice were to "Do what you know (how) to do, and do what you do best."

"It was a good score. Overall it was great," he said.

Mitt Romney unleashed a torrent of criticism in the British media recently when, shortly after arriving for the Olympics' opening ceremony, he said the problems facing Olympic organizers were "disconcerting." It was the first of several gaffes that followed during campaign-style visits to Israel and Poland that were supposed to show off his foreign policy chops.

Rafalca's turn in the equestrian arena turned an Olympic spotlight on another issue facing Romney: his vast personal wealth during tough economic times in the United States. He is worth as much as $250 million.

His wife's financial interest in Rafalca, a bay Oldenburg, has fed criticism that Romney is out of touch with the concerns of more modest-income voters. A topflight dressage horse can cost more than six figures. Upkeep runs a few thousand dollars a month and transport and competition fees cost tens of thousands. The Romneys own several horses; Ann Romney rides as part of her therapy for multiple sclerosis.

The sport, better known in Europe than the U.S., is the equine equivalent of ballet. A rider, clad in top hat and tails, takes the horse through a series of steps that look like the horse is dancing: twirling pirouettes, prancing trots and the crowd-pleasing "flying change," which looks like the horse is skipping.

The Romneys' interest in dressage — financial and otherwise — has furthered the impression that the sport is a pastime of the monied 1 percent. It has inspired several episodes of political satirist Stephen Colbert's "The Colbert Report," with one aired this week in which Colbert — dressed like Roy Rogers — takes a dressage lesson from Michael Barisone, the U.S. dressage team's reserve rider in the 2008 Olympics.

In his first riff on the sport, Colbert produced a red foam finger in a bid to show more blue-collar support for its competitors. The U.S. Equestrian Federation seized on the moment and created a few hundred "Dressage is No. 1" red foam fingers for use at the Olympic trials that secured the Romney mare a spot in London. Ann Romney waved one herself, though there was no evidence of the red foam finger on Thursday.

She has shown similar good humor in laughing off a Democratic National Committee web ad, since pulled, that mockingly used footage of one of her show horses.

Out at Greenwich Park, such jokes were far from the minds of the U.S. dressage team, which has a shot at the bronze team medal. Germany and Britain are favored for the top medals.

"All of our horses are peaking at the right time," said U.S. team member Tina Konyot, who was riding Calecto V. "The other competitors are watching us."

Rafalca's rider, Ebeling, welcomed the attention, negative or not, that the Romneys' stake in the horse has given the sport, saying it's a chance to show that dressage isn't about millionaires but hard work.

"I think the biggest misconception is always that people think that you just sit on a horse and they just kind of trot around in circles," he said. "That really is not the case."

A typical dressage horse requires up to a decade of training to compete at Olympic levels. Horse and rider work very much as a team, with the rider giving the horse invisible cues through subtle leg, hand and seat shifts. The horse is judged from 0-10 on executing a standard test of 33 movements that include:

-PIAFFE: a passage done in place

-HALF-PASS: where the horse moves forward and sideways at the same time by crossing over its legs

-PIROUETTE: where the horse completes a full circle in place while cantering

-FLYING CHANGE: where the horse changes the sequence of its steps

And while horse owners may need deep pockets to maintain their dancing breeds, the riders very often come from more modest means. Konyot, for example, grew up in a family of circus performers: Her father trained circus horses and her mother was a tightrope walker. Ebeling himself emigrated from Germany in 1984 hoping to find greater financial and professional opportunities in the U.S. than he could at home.

That said, the sport does have an aristocratic background. Dating from ancient Greece, dressage was revived in European royal courts during the Renaissance as an art form. The creation of the Spanish Riding School in Vienna in 1729 eventually brought its renown outside Europe.

The school's famous Lipizzaner stallions are still performing classical dressage in exhibition tours today. In the 19th century, dressage became essential to the training of cavalry officers who then started competing as another part of their training — competition that evolved into an Olympic sport in 1912.

The seven highest scoring teams from Thursday's Grand Prix advance to a second, harder test called the Grand Prix Special on Aug. 7. The 18 highest-scoring individual riders then perform a freestyle set to music to determine individual medal scores. That competition is Aug. 9.

Ebeling, who became a U.S. citizen in 1998, said the Romneys have been great supporters of the sport and have helped boost its visibility.

"I really welcome the attention," he said. "It's given us a fantastic opportunity to have our sport — have visibility in our sport — and show what we're really about, show that it is an Olympic discipline and show people how much we work to get there."