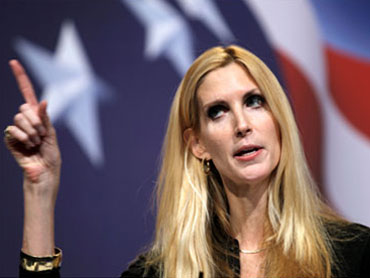 BERKELEY -- A scheduled appearance by conservative commentator and writer Ann Coulter at the University of California later this month has been canceled because of concerns about safety and security at the event, UC Berkeley officials said Wednesday.

Word of the cancellation of the April 27 event comes just days after a violent encounter between far-right supporters and far-left protesters at a pro-President Trump rally in Berkeley in which multiple people were injured and arrested, CBS San Francisco reports.

In a letter to the Berkeley College Republicans, UC Berkeley Vice Chancellor Scott Biddy and Vice Chancellor for Student Affairs Stephen Sutton said the university will work with the group to find an alternative time and date for often-provocative Coulter to speak at Berkeley.

The letter said the UC Police Department determined that because of “currently active security threats,” it was not possible to ensure that the safety of Coulter, sponsors and attendees could be adequately protected at any of the campus venues available.

Coulter confirmed in a tweet that the event had been canceled.

In February, an appearance at Cal by former Breitbart editor Milo Yiannopoulos was canceled after protesters rioted outside the scheduled event. Several people were injured during the disturbances.

Last week, an appearance by conservative writer David Horowitz was also canceled after university police told the campus Republican group that to ensure adequate security, the event would have to be held in the middle of the day and outside the center of campus.

The group says such cancellations stifle free speech and made it increasingly difficult to bring conservative thinkers to the Cal campus.