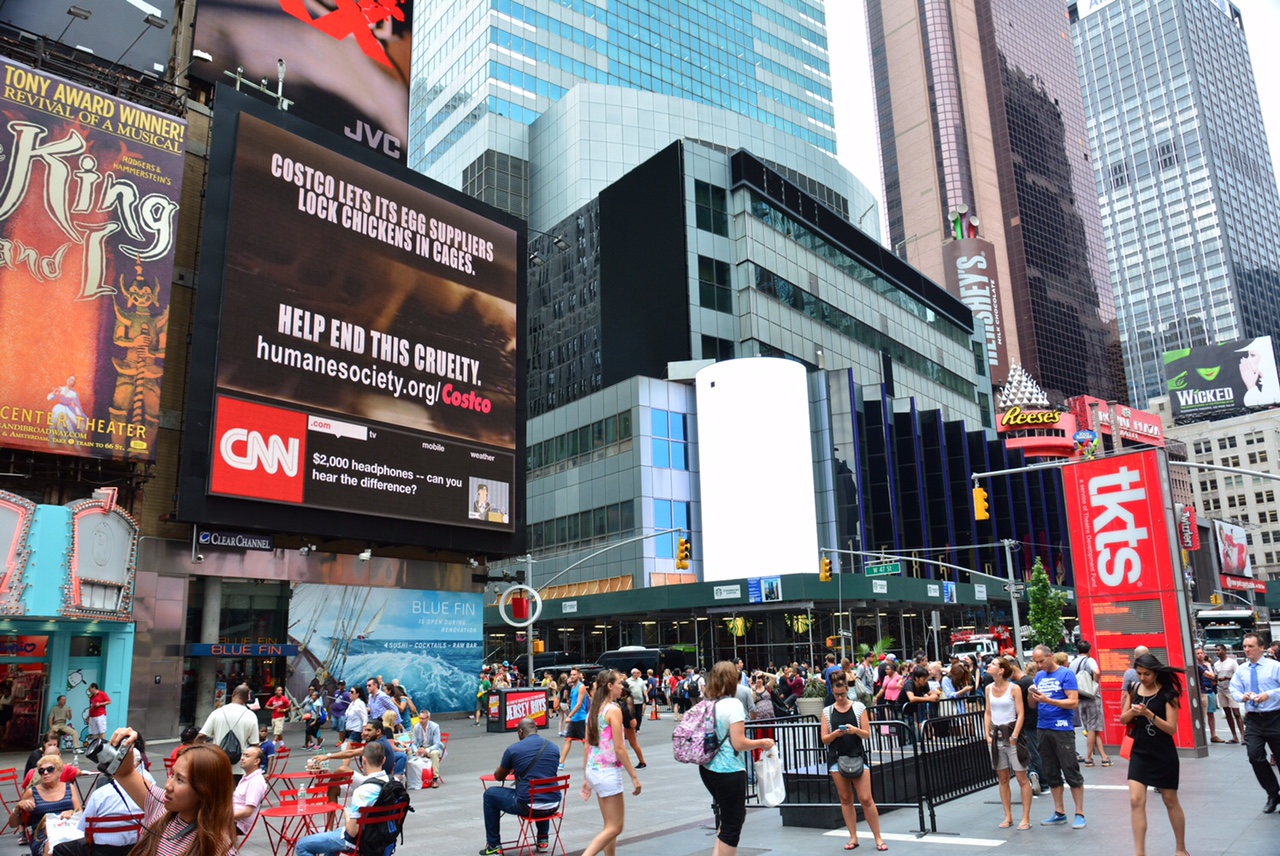 The Humane Society of the United States is taking its public relations fight against Costco Wholesale (COST) to the symbolic heart of the media world.

Starting Monday, the animal welfare group will broadcast graphic footage of hens allegedly being mistreated at a Pennsylvania supplier of eggs to Costco on a 1,700 square-foot billboard in Times Square. The group shot the undercover footage as part of a campaign to pressure the retailer to only sell eggs from cage-free hens (see video below).

"Eight years ago Costco made a public statement that it was intending to go 100 percent cage-free," said Paul Shapiro, the Humane Society's vice president of farm animal protection.

But the warehouse store has failed to follow through on that commitment, the group says, even as other major corporations -- including Burger King, Unilever (UL) and Sodexo -- began the transition to cage-free eggs.

More than 300,000 pedestrians enter the heart of Times Square each day, according to the Times Square Alliance, a group that promotes businesses in the area.

The pressure on Costco to shift to cage-free eggs has been growing, with celebrities including actor Ryan Gosling and satirist Bill Maher calling on the company to live up to its promise.

Costco has mostly sought to deflect such criticism by defending the egg supplier, Hillandale Farms in Gettysburg, Pennsylvania, portrayed in the Humane Society's footage.

Costco did not return calls and emails requesting comment.

The Humane Society's footage, which shows hens confined in cages so cramped they can't spread their wings, will be shown for a week, playing several times an hour, rotating with other ads on a billboard.

"Egg-laying hens in the Costco supply chains are locked in cages so cramped that they can barely move an inch their entire life," Shapiro said in describing the video's content. "Birds are dying in cages and being left to rot, with survivors laying eggs for human consumption on top of mummified corpses, and other hens trapped in the wire of their cages, dying of dehydration because they can't reach their water just inches away."

Beyond drawing attention to Costco's policies, the video will direct viewers to a website where they can use an automated system to call the company and ask it to eliminate eggs from caged hens from its supply chain.

There are about 8 million birds laying eggs just for Costco shelves, with about 5 million in cages and the remaining 3 million cage free, according to Shapiro.