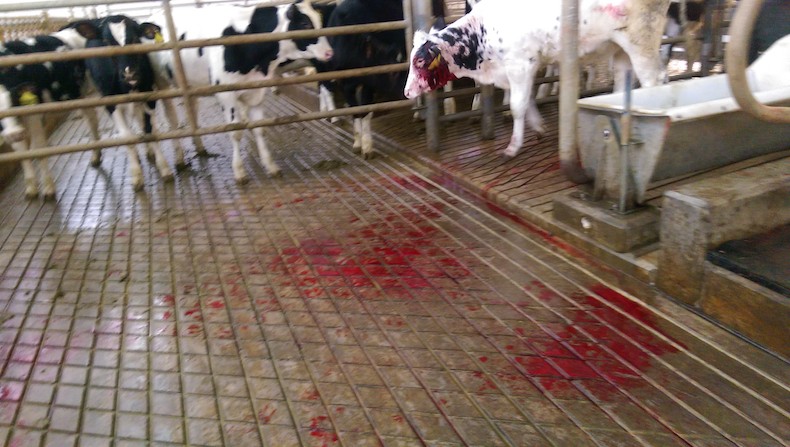 Daisy Farms -- home to several thousand bovines in Paris, Texas -- gives each animal a name, an individual approach touted by the company on its website and by its owners.

"We treat these cows like pets -- our number one priority is milk-healthy cows," said Ben Sokolsky, who along with his father, David, run the family-run business, one of two companies that operate under the Daisy Brand. Based in Dallas, Texas, Daisy Brand is the nation's largest sour cream manufacturer, according to Dairy Magazine, which estimated the private company's fiscal-year 2014 sales to be $470.4 million.

That treatment, however, is being described in far different terms by the People for the Ethical Treatment of Animals (PETA), which looked into operations at Daisy Farms after being contacted in May by a person who had worked at the farm for more than a year, said Dan Paden, associate director of evidence analysis in PETA's cruelty investigations department.

The former Daisy Farms employee, who worked primarily with calves and heifers, "sent us disturbing video and photographs of cows and calves who were sick with pneumonia and struggling to breathe, who were suffering with such severe diarrhea that the waste scalded their skin," said Paden. "That person left precisely because they saw they could not improve conditions at the farm, despite trying."

In a letter to the Lamar County sheriff's office, PETA asked for an investigation into whether current or former employees at Daisy Farms had violated the state's prohibition against cruelty to livestock animals. Among the allegations: Workers had forced milk into the respiratory tracts of three calves, killing two of them, kicking a calf in the head and not providing cattle with veterinary care after their tails were severed.

"I haven't seen anything as far as any type of complaint," said Jeff Springer, chief deputy of the sheriff's department. "It's a very large dairy farm, and they take very well care of their cows. They've got an excellent reputation."

The surging ranks of super-commuters

PETA's allegations were documented in photographs and an extremely graphic video shot by an undercover investigator, who worked at Daisy Farms from late June up until last week, and spoke to CBS MoneyWatch on condition she not be identified.

Workers at Daisy Farms were "apathetic to the conditions and the pain they were causing, jabbing cows with pens and knives, hitting them with ropes to get them to move. It was all about getting it done in the shortest amount of time with the least amount of effort," said the investigator.

"This video is not a representation of who we are and does not represent how we feel animals should be treated," Sokolsky emailed. "In light of this video footage, we will be engaging a third party welfare audit firm to identify areas where we can improve upon our current practices and procedures."

The employee who recorded the footage notified management that another worker was mistreating animals, and after management investigated the claims, the employee "referenced in this video was terminated immediately," Sokolsky added.

"Other workers (beyond the fired employee) twisted cows' tails and killed calves in agonizing ways. Firing one worker didn't end the suffering at Daisy. The manager himself failed to have a veterinarian even examine, much less care for, cows whose tails were severed and bleeding," Paden responded.

Working conditions for employees under pressure to process what is viewed as a commodity is part of the underlying cause for the way animals at Daisy Farms are treated, said the undercover investigator: "Animals are seen as things. It's a vicious cycle, the farm doesn't care about the animals or the workers, and in return the workers don't have any loyalty to the farm or the animals."