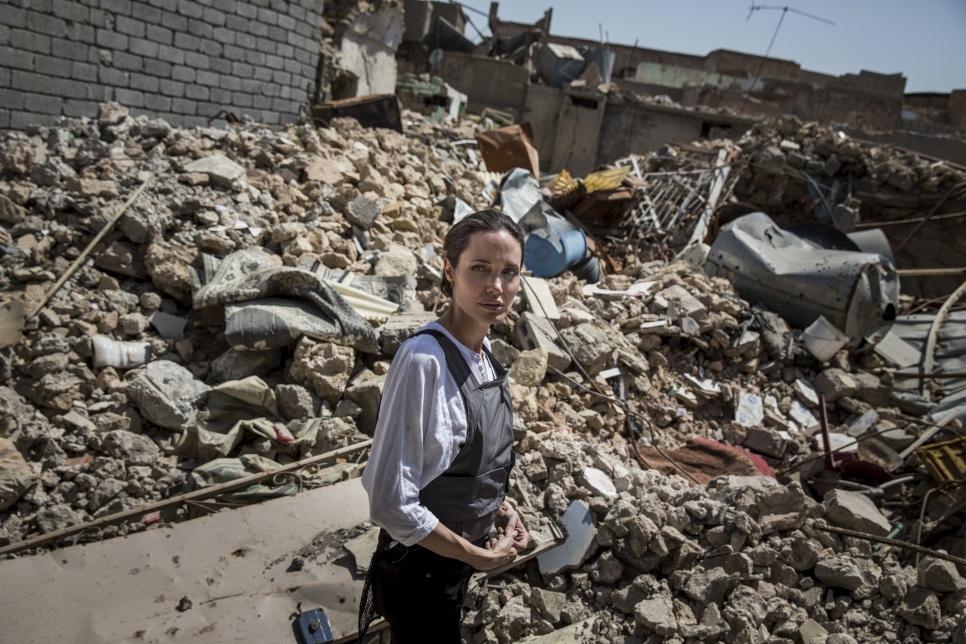 Serving as a special envoy to the United Nations High Commission on Refugees, Angelina Jolie is visiting west Mosul less than a year after the city was liberated from Islamic State of Iraq and Syria (ISIS) forces. The trip marked her 61st mission and fifth visit to Iraq with the UN refugee agency since 2001, according to a UNHCR release.

Jolie arrived on the second day of Eid al-Fitr, the Muslim holiday marking the end of Ramadan.

Walking among bombed-out buildings in the narrow streets of the Old City, Jolie met displaced families to discuss efforts to rebuild the city and the needs of the returning population.

Aid from the United Nations to returning families includes cash assistance to rebuild their homes, legal representation for those arbitrarily detained because of mistaken identity, and help obtaining essential legal documents lost during the occupation.

"This is the worst devastation I have seen in all my years working with UNHCR," Jolie said in front of the ruins of a mosque. "People here have lost everything: Their homes are destroyed. They are destitute. They have no medicine for their children, and many have no running water or basic services. They are still surrounded by bodies in the rubble. After the unimaginable trauma of the occupation, they are now trying to rebuild their homes, often with little or no assistance."

Iraqi Prime Minister Haider al-Abadi declared victory over ISIS in Mosul in July 2017. ISIS first took control of Mosul in June 2014, as the militants stormed across northern Iraq. The U.S.-led coalition started carrying out airstrikes against ISIS targets in Iraq later that year.

As CBS News correspondent Holly Williams reported at the time, Mosul was a hard-won victory, and it cost thousands of Iraqi lives.

Jolie said Saturday the international community often assumes that liberation ends with armed conflicts, and reminded that displacement, overcrowded encampments and rehabilitating affected areas like Mosul is "essential for the future stability of Iraq and the region."

"We have learnt in Iraq before and elsewhere in the region the dangers of leaving a void. It is also what the families and survivors deserve," Jolie said, according to UNCHR. "It is deeply upsetting that people who have endured unparalleled brutality have so little as they try, somehow, to rebuild the lives they once had."