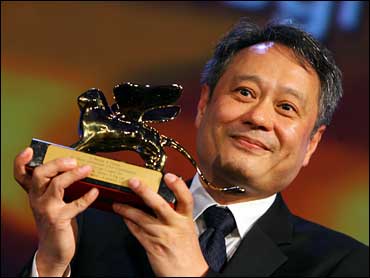 Brian De Palma won the 11-day-long festival's award for best direction for his film "Redacted" about the Iraq war.

Lee's film is set against the backdrop of Japanese-occupied Shanghai during World War II. An idealistic young acting troupe in Hong Kong driven by patriotic fervor concocts a naive plot to assassinate a Chinese official collaborating with the Japanese. Their star performer delves into the role of seductress as an escape from the emptiness of her father's abandonment and mother's death.

Her pursuit of a cruel, aloof man takes her from Hong Kong to Shanghai at the height of the Japanese occupation - and her deception becomes her reality.

"Lust, Caution," which contains explicit sexuality, has been given an NC-17 rating in the United States, banning viewers under 17. The film also does not shrink from a graphic portrayal of violence. It is due out in the United States at the end of September.

"Brokeback Mountain," which also took the Golden Lion prize at the festival, told the homosexual love story between two cowboys in the American West.

Lee said he was dedicating his prize to Ingmar Bergman, the Swedish director who died in July at age 89.

Winning the Golden Lion for a second time "is a wild one, which frightens me, like the film," Lee said at the ceremony.

Cate Blanchett won the festival's award for best actress for her role in "I'm Not There," a movie about singer-songwriter Bob Dylan. Blanchett played the role of Dylan during his folk-rock incarnation.

Brad Pitt won best actor for playing the legendary outlaw in "The Assassination of Jesse James by the Coward Robert Ford."

Neither Blanchett or Pitt were on hand to pick up their awards.

Italian director Bernardo Bertolucci was honored with a special award for his career's work, which includes "Last Tango in Paris," "The Conformist" and "The Last Emperor" - his 1987 film about the life of China's last emperor which won nine Oscars, including best director.

Bertolucci, whose "Last Tango in Paris" was banned from Italy for 16 years, said he wished he could help his homeland open up a bit more. At a news conference, the 66-year-old director was asked if receiving the honor would make him feel like Italy's ambassador to the world.

"I'd rather be the world's ambassador to Italy. That way, perhaps, I could bring something to this country that struggles a little to open itself up to international experiences," he said.

But "if I were ambassador, I would create diplomatic incidents," Bertolucci said, chuckling. "Thus it is better that I continue as a simple film director."