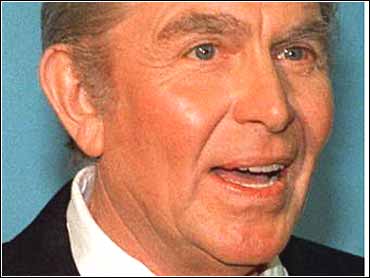 Andy Griffith is recovering at home from a heart attack and quadruple bypass surgery, a longtime friend confirmed Tuesday.

The actor lives in Manteo, N.C., about 300 miles from Mount Airy, the inspiration for the fictional town of Mayberry in his 1960s comedy series The Andy Griffith Show.

Cindi Griffith said her husband still is weak but is recovering at their home, where he was stricken last month, Forrest said.

Don DeMesquita of the William Morris Agency said Tuesday that Griffith underwent quadruple bypass surgery May 9. "His medical prognosis is excellent, and his doctors anticipate a full and complete recovery," he said.

Griffith, 74, also suffers from Guillain-Barre syndrome, a neurological disorder that has plagued him for nearly 20 years. Forrest said Tuesday it still causes him occasional problems with his feet.

Griffith will appear in September in the motion picture comedy Daddy and Them, which Billy Bob Thornton wrote, directed and stars in.

Forrest said she and her husband Emmett attended high school with Griffith; Emmett Forrest and Griffith both graduated with the Class of '44, she said. After Griffith went to the University of North Carolina at Chapel Hill, he never lived in Mount Airy again, Forrest said.

Griffith sprang to fame as the friendly, easy-going Sheriff Andy Taylor in The Andy Griffith Show, which remained one of the top 10 prime-time programs during its entire eight-year run on CBS.

One of the few programs ever canceled while ranked No. 1 in the ratings, the show has remained on the air continuously for 40 years with a rerun afterlife in syndication and cable.

But Griffith once said that his favorite role was the title character he played in the 1980s legal drama Matlock and in a slew of 1990s TV movies based on the series.