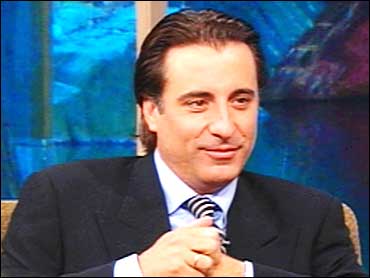 In the new film "Confidence," the emphasis is on the con.

Andy Garcia plays a federal agent with a personal score to settle against a high stakes grifter.

Garcia visited The Early Show to discuss the film that may have audiences guessing what the big con will be.

"It was a fascinating piece of material," says Garcia. "It's a movie that's based upon classic storytelling."

"Confidence" tells the story of Jake Vig (Edward Burns), who swindles thousands of dollars from a crime boss' accountant. To repay "The King" (Dustin Hoffman), Jake offers to pull off a big con by targeting a banker with deep ties to organized crime. But his con doesn't work exactly as planned, and Jake has to contend with his old nemesis, FBI agent Gunther Butan (Andy Garcia).

"I've been chasing [Jake] around Phoenix and Salt Lake City, everywhere, basically trying to bust him," says Garcia. "As the movie unfolds there are turns and red herrings and twists."

Garcia says he was also thrilled to be involved in "Confidence" because it allowed him to work with actors, such as Hoffman, who he admires.

The actor will take a seat on the director's chair for his next film, "The Lost City." It is a movie about Havana, Cuba in the 1950s — a story the Cuban-born Garcia has wanted to tell for a long time.

"I think the timing is good," explains Garcia. "It's a movie that's based upon classic storytelling. You have the elements of music and dance, love stories, stories of impossible love set against political backdrops. But mostly, it's a movie about the cabaret world of Havana and how the microcosm of that family in Cuba is affected by the changing times."

Garcia has been a participant of the Cuban music culture in the past, even making a documentary about the mambo.

"My first love in life has always been the music of my culture," says Garcia. "It's something that I live with. I should say I live it every day of my life."

Garcia's next acting project will pair him with Samuel L. Jackson in "The Blackout Murders."

Some Facts About Andy Garcia