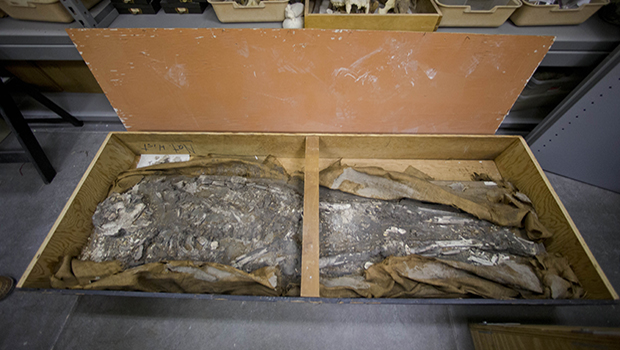 An archaeology museum in Philadelphia has made an extraordinary find -- in its own storage rooms.

The University of Pennsylvania's Penn Museum announced Tuesday that it had rediscovered a 6,500-year-old human skeleton originally excavated from southern Iraq around 1930.

The complete remains, which had been kept in a coffin-like box, were missing documentation until researchers recently began digitizing the museum's collection from an expedition to Ur, an ancient city near modern-day Nasiriyah.

Project manager William Hafford was matching archaeological objects with inventory lists from the Sumerian trek when he came across a description of a full skeleton that he couldn't find.

He consulted Janet Monge, chief curator of physical anthropology, who happened to know of an unlabeled, mystery skeleton in the facility's basement storage area.

"So we went, found the crate, opened it up and compared it to the field notes and the field photographs, and we had a match," Hafford said.

The body is believed to be that of a well-muscled man at least 50 who stood 5 feet, 9 inches tall, according to Monge. She hopes a skeletal analysis, possibly including a CT scan, will reveal more about his diet, stresses, diseases and ancestral origins.

Complete human skeletons from that era -- known as the Ubaid period, from 5500-4000 B.C. -- are rare, partly because the region's burial practices and type of land didn't lead to good preservation, Monge said.

The skeleton was cut into deep silt, indicating that the man had lived after an epic flood. That led Penn researchers to nickname their re-discovery "Noah."

Scholars from the Ivy League university teamed up with researchers from the British Museum in 1922 for a dig led by Sir Leonard Woolley. Half of the objects found over the next 12 years at Ur were sent to the National Museum of Iraq in Baghdad, while the other half was split between London and Philadelphia.

Hafford and his counterparts in Britain are now working to digitize their share of the collection. They hope curators in Baghdad will eventually do the same, but coordination with officials in the war-torn nation has been difficult, Hafford said.

Coincidentally, in June, researchers at Bristol University in Britain discovered a box of materials from the same Ur expedition on top of a cupboard. Researchers determined the objects were 4,500 years old, including pottery, seeds, carbonized apple rings and animal bones.

No one knows how the box got to Bristol, which had no connection to the Woolley dig.

Monge said it's not uncommon for a research institution like the Penn Museum -- which is filled with hundreds of thousands of objects, from the smallest pottery shard to enormous totem poles -- to have question marks surrounding the origins of some items.

"I have quite a few specimens that are cold case, orphaned museum collections," Monge said. "So that gives us the fun enterprise of going back and sleuthing through all of the archival material and trying to identify them as best as we can."