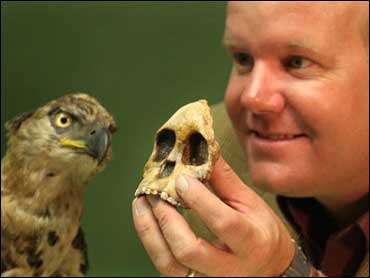 An American researcher believes he has solved the mystery of how one of the most important human ancestors died nearly 2 million years ago: An eagle killed the 3 1/2-year old ape-man known as the Taung child.

The discovery suggests small human ancestors known as hominids had to survive being hunted not only by large predators on the ground but fearsome raptors that swooped from the sky, said Lee Berger, a senior palaeoanthropologist at Johannesburg's University of the Witwatersrand.

"These types of discoveries give us real insight into the past lives of these human ancestors, the world they lived in and the things they feared," Berger said in documents accompanying a presentation at a conference Thursday. "These are the stresses that formed the human mind and made us one of the most successful animals on the face of the planet."

The discovery of the partial skull of a juvenile ape-man, or australopethicus africanus, in South Africa's North West Province in 1924 is regarded as evidence of the "missing link" in human evolution. The find lead many researchers to believe humans evolved in Africa, instead of Asia or Europe.

The child's death has been blamed on a leopard or saber-toothed cat, which are known to have preyed on hominids. But 10 years ago, Berger and fellow researcher Ron Clarke submitted the theory that the hunter was a predatory bird, similar to today's African crowned eagle.

Berger and Clarke argued the skulls and bones of monkeys and other animal fossils found at the Taung site, about 300 miles southwest of Johannesburg, showed evidence of eagle-caused damage. Other researchers agreed eagles were likely preying on small animals at the site, but contended ape-men were too large, sophisticated and organized to be taken by a bird.

"The one big problem was the lack of multiple areas of damage on the Taung child itself that could be linked to a bird of prey," Berger said. "We had one little flap of bone on the top of the skull that looked like some of the damage we see made by eagles and nothing else ... It was the ultimate 2 million-year-old cold case!"

Five months ago, researchers from Ohio State University submitted what Berger called the most comprehensive study to date of eagle damage on bones. Berger was among those asked to review the paper for the American Journal of Physical Anthropology.

The study by Scott McGraw, Catherine Cooke and Suzanne Schultz of primate remains from modern-day crowned eagle nests in Ivory Coast's Tai forest showed raptors routinely hunt primates much larger than themselves by swooping down at speed and piercing their skulls with their back talons. There is even a documented case of an eagle killing a human child, Berger said.

The Ohio State paper also identified key features that distinguished damage caused by eagles from that of other predators. They include the flaps of depressed bone on top of the skull caused by the birds' talon and keyhole-shaped cuts on the side made by their beaks, noted by Berger and Clarke in their 1995 paper.

But they also identified features previously never described: puncture marks and ragged incisions in the base of the eye sockets, made when eagles rip out the eyes of dead monkeys with their talons and beaks to get at the brains. Large predators can't reach inside the tiny sockets and instead crack open the skulls, Berger said.

The study prompted Berger to go back and re-examine the Taung skull.

"I picked up this little face, and I almost dropped it," he said Thursday. There was a tiny hole and jagged tears at the base of the eye sockets that he and over two dozen other researchers who have debated the hypothesis had never noticed before.

Berger checked a 1925 cast of the skull to confirm the damage was always there.

"I think ... that we have conclusively proven, beyond a reasonable doubt that that is the killer of the Taung child," Berger said, looking up at a slide of an African crowned eagle.

McGraw, a co-author of the Ohio State study that led Berger to his conclusions, agreed "the evidence seems pretty compelling."

"There could be other agents responsible for a similar appearance, but I don't know what those are yet," he said by telephone from the United States.

McGraw, who did not participate in Berger's study, said the next step was to put the Taung skull next to the Tai monkey skulls and look at the break edges more closely. So far, only photographs have been used.

Berger presented his research at a conference celebrating the 80th birthday on Oct. 14 of retired South African professor Phillip Tobias, who did pioneering research on the evolutionary links between primates and humans. It is due to be published in the February edition of the American Journal of Physical Anthropology.