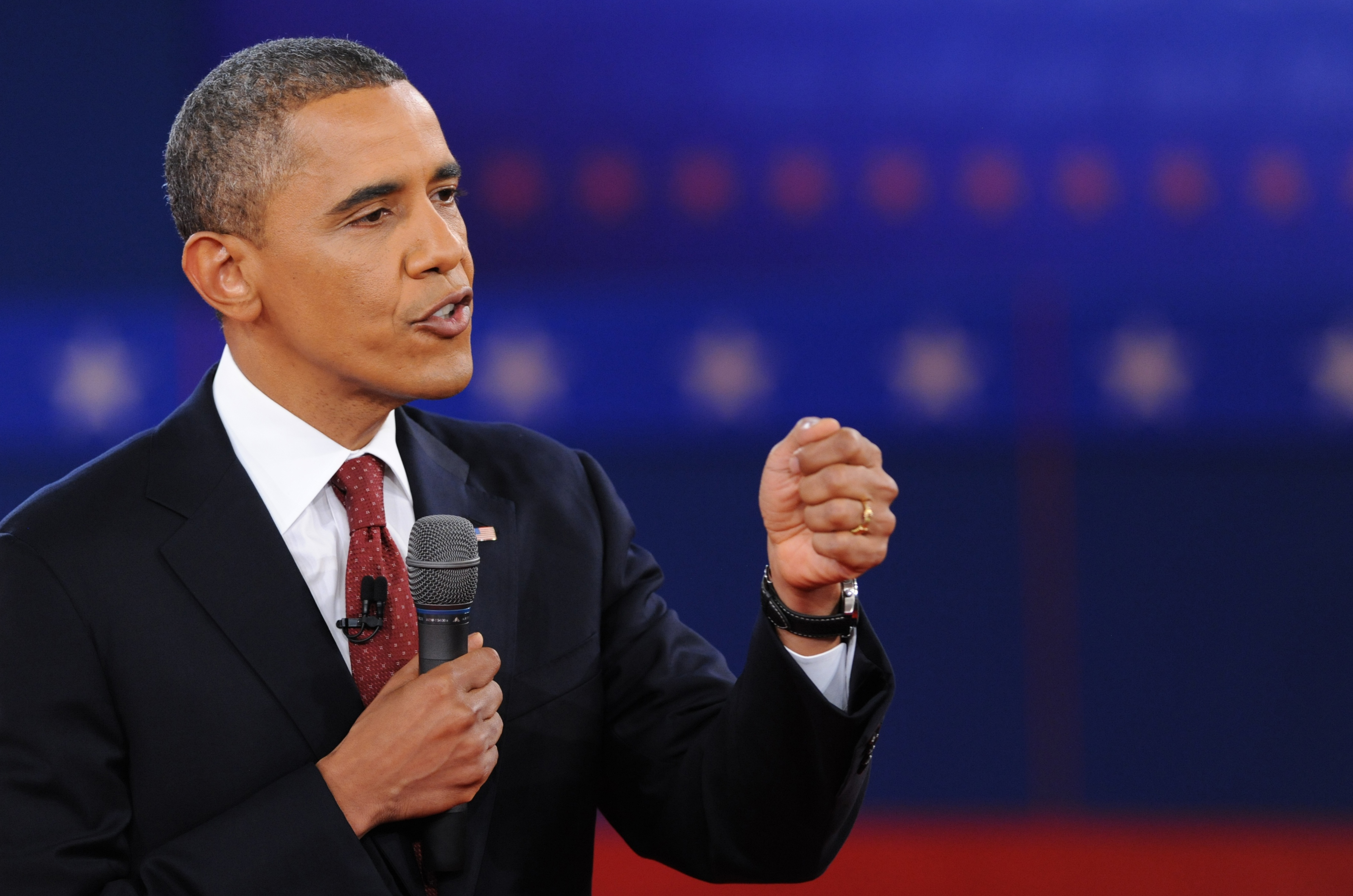 Before Tuesday night's presidential debate, the satirical newspaper "The Onion" ran a story about how President Obama was "excited to participate in the first debate." The joke, of course, was that Mr. Obama's flat, passionless performance in the actual first debate amounted to his not having shown up at all.

No one is going to accuse the president of not having shown up this time around. Mr. Obama didn't let the town hall format keep him taking it to his opponent: He came out firing from the outset, effectively calling Mitt Romney a liar offering a "sketchy deal" who won't level with the American people. It was the sort of performance that Democrats had been hungry for following the president's passionless initial performance, and one that will reenergize a Democratic base that spent the past two weeks in panic mode.

What's not clear is how it will play with uncommitted voters. The CBS News pollof uncommitted voters, taken immediately after the debate, gave Mr. Obama a slight edge, but not a clear win: 37 percent gave the debate to the president, 30 percent gave it to Romney, and 33 percent called it a tie. One lingering question for the president will be whether the aggressive tone turned off those who would have preferred a more civil exchange, among them the female voters that the president needs to win over to have any hope of a second term.

Of course, Romney wasn't exactly a shrinking violet either. He did his best to take it to the president, at one point curtly stating when interrupted by his rival, "I'm still speaking." There was even a moment, when the two men came nearly toe to toe during a heated and direct argument, that it almost appeared they would come to blows. The debate was exceedingly contentious, particularly considering the town hall setting: A battle between two men who did not appear to like each other and did not mind letting the world know it.

Romney had one particularly strong moment: When he broke down how Mr. Obama has failed to keep many of his first-term promises in a clear and concise fashion. "This is a president who has not been able to do what he said he'd do," Romney said. "He said that he'd cut in half the deficit. He hasn't done that either. In fact, he doubled it. He said that by now middle-income families would have a reduction in their health insurance premiums by $2,500 a year. It's gone up by $2,500 a year. And if Obamacare is passed, or implemented - it's already been passed - if it's implemented fully, it'll be another $2,500 on top."

But it was Mr. Obama who landed the majority of the blows. Perhaps his finest moment came in response to a question on Libya. This was supposed to be an area of advantage for Romney in light of the administration's bungled response to the terror attack. Instead it was a shining moment for the president, who pivoted to make a memorable case for his toughness as commander-in-chief. "I said that we'd go after al-Qaeda and bin Laden, we have," he said. "I said we'd transition out of Afghanistan, and start making sure that Afghans are responsible for their own security, that's what I'm doing. And when it comes to this issue, when I say that we are going to find out exactly what happened, everybody will be held accountable. And I am ultimately responsible for what's taking place there because these are my folks, and I'm the one who has to greet those coffins when they come home. You know that I mean what I say."

Romney, meanwhile, was reproached by moderator Candy Crowley after he claimed that the president did not label the attack an act of terrorism quickly enough. (Mr. Obama used the phrase "act of terror" in his initial remarks in the Rose Garden, though he did not specifically call the incident a terrorist attack.) And Mr. Obama was able to deem Romney's attacks on the issue "offensive," leaving Romney sputtering in response.

That was the tone all night: After Romney said he would lower gas prices and criticized the president for letting them rise, Mr. Obama was ready with a stinging response: He said that the price of gasoline was so low when he took office because "some of the same policies that Governor Romney's now promoting" had tanked the economy. "So, it's conceivable that Governor Romney could bring down gas prices because with his policies, we might be back in that same mess," he said.

Mr. Obama was confident, aggressive and detailed all night: He laid out what he said was $8 trillion in proposed tax cuts and spending increases by his rival, and then pointed out in clear language that Romney won't explain how he'll pay for it. "We haven't heard from the governor any specifics beyond Big Bird and eliminating funding for Planned Parenthood in terms of how he pays for that," he said - right after reminding voters that the wealthy GOP nominee had paid only a 14 percent tax rate, which is lower than most Americans believe they pay.

And with the help of a favorable string of questions from the town hall audience, the president was able to make a direct and clear case and draw blood on issues that favor him like immigration (Romney's "top adviser on immigration is the guy who designed the Arizona law, the entirety of it") and social issues ("In some ways, [Romney has] gone to a more extreme place when it comes to social policy" than President Bush). When Romney tried to land a blow by stating that the president's pension fund included investments in China - Democrats have criticized Romney for having investments in that country - by asking, "Mr. President, have you looked at your pension?," the president had a quick response that squared perfectly with his campaign's portrayal of Romney as an out of touch plutocrat: "You know, I - I don't look at my pension. It's not as big as yours so it doesn't take as long."

And the president, who gave a listless closing statement in the first debate, saved up a bomb for his closer Thursday: A reference to Romney's closed door "47 percent" comments. Romney tried to head him off at the pass, insisting earlier that he cares "about 100 percent of the American people," but the president got the last word, saying that when his rival "he said behind closed doors that 47 percent of the country considered themselves victims who refuse personal responsibility," he was talking about the veterans, students and soldiers that the president will fight for.

The debate is unlikely to have the dramatic impact on the race that resulted from the first debate, which elevated Romney to the president's level and prompted a surge in the polls for the Republican nominee. That debate effectively reframed the race, and Tuesday night's performance isn't going to change the fundamentals of the race. But it does appear likely to rally the Democratic base, and, combined with Joe Biden's spirited performance Thursday, potentially shift the momentum back to the Democratic ticket. A CNN poll of registered voters who watched the debate - which the network said had a larger-than-normal sample of Republicans - showed that 46 percent saw the president as the winner, while 39 percent gave the debate to Romney. And while 37 percent said Romney exceeded expectations, 73 percent said the president did so. Romney certainly hung in there, but there's no denying that the president managed to right the ship on Tuesday night. And that should have Democrats breathing a big sigh of relief.