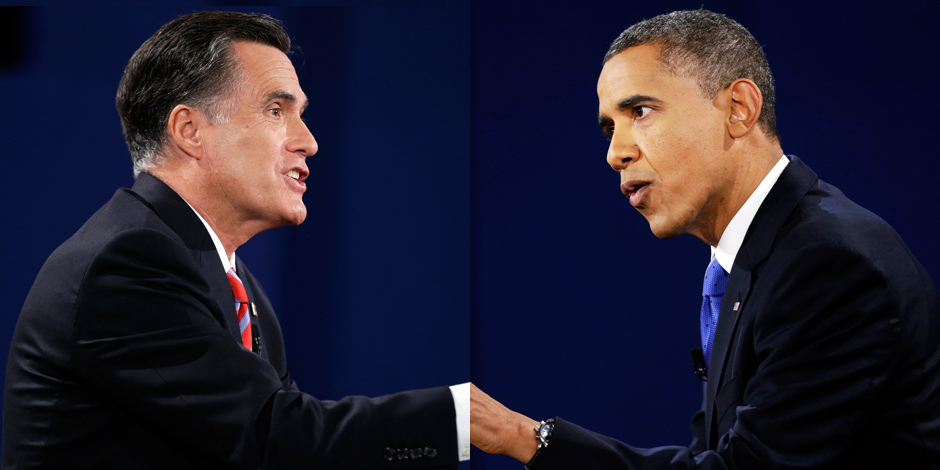 If you look at it in a vacuum, it's hard not to conclude that President Obama won Monday's foreign policy-focused presidential debate: The president projected a firm grasp on his administration's positions, spoke forcefully, and landed a number of broadsides against his rival. A CBS News focus group of uncommitted voters taken immediately after the debate found that 53 percent believed Mr. Obama was the stronger debater, compared to just 23 percent for Mitt Romney.

But this was almost certainly the least important of the three debates, and it's hard to imagine that the candidates' performance will have much of an impact on who wins the White House. Let's start with the topic: Polls overwhelmingly show that the economy, not foreign policy, is voters' top concern, which is why you saw the candidates repeatedly try to shift the conversation back to their argument on that front. Both campaigns are well aware that the candidates' positions on sanctions in Iran or arming Syrian rebels simply are not going to have a significant impact.

Then there's the timing. The first debate allowed Romney to elevate himself to the president's level, prompting a surge in the polls. The second debate gave Mr. Obama the chance to reassure demoralized liberals that he was still engaged and willing to take it to his rival. This debate came at a time when the parameters for the home stretch had been set, and it would have taken a much starker difference between the candidates than we saw Monday night to significantly shake things up. Four years ago, John McCain came out firing in the final presidential debate (which, like this one, was moderated by CBS News' Bob Schieffer), and it had little impact on the race: McCain was trailing by eight percentage points when he stepped onto the debate stage, and went on to lose the race by seven points less than three weeks later.

Romney was cautious on Monday night: He passed on an opportunity to strongly attack the president on a number of issues, including his administration's handling of the Sept. 11 attack in Libya. He also declined to draw strong distinctions between his positions and Obama administration policy. That's partially because, when all is said and done, there is little difference between the two men on foreign policy. But it was also, Romney aides said following the debate, a strategic decision. The calculation was that Romney did not need to be particularly aggressive: He could look presidential by declining to go on the attack and letting the incumbent assume the attack-dog mode that is traditionally associated with the challenger.

It was a smart strategy: Romney, who lacks foreign policy experience, is clearly more comfortable discussing the economy, and Mr. Obama has a relatively strong record on foreign policy that left his rival with few openings. But it also meant that the president got to land the majority of the blows. There was, of course, the most memorable line of the night: When Romney pointed out that the Navy was smaller than it used to be and called for more ships to be built, the president responded that "we also have fewer horses and bayonets, because the nature of our military's changed." The line caught fire on the internet, though it's worth noting that, as Romney's surrogates pointed out, it also likely fired up some Navy veterans to back the GOP candidate.

More important was the president's clear - if not new - attack on how Romney wants to increase military spending and cut taxes without explaining how he'll pay for it. The president was also effective in casting of Romney as trapped in the foreign policy of the past. This was the source of his second best line of the night: "Governor Romney, I'm glad that you recognize that Al Qaida is a threat, because a few months ago when you were asked what's the biggest geopolitical threat facing America, you said Russia, not al Qaeda; you said Russia, in the 1980s, they're now calling to ask for their foreign policy back because, you know, the Cold War's been over for 20 years."

The president was also strong on his trump card: The death of Osama bin Laden on his watch. "When it comes to going after Osama bin Laden, you said, well, any president would make that call," he told Romney. "But when you were a candidate in 2008, as I was, and I said if I got bin Laden in our sights I would take that shot, you said we shouldn't move heaven and earth to get one man. And you said we should ask Pakistan for permission. And if we had asked Pakistan permission, we would not have gotten him. And it was worth moving heaven and earth to get him."

Romney's critiques were more scattered: He suggested that al Qaeda had yet to be defeated and said "we must have a comprehensive strategy to reject that kind of extremism," but he did not articulate what that strategy would be. He essentially ceded that Mr. Obama had put in place tough sanctions against Iran, and his argument that Mr. Obama had failed to lead on the world stage was not backed up with specific examples. Romney was most effective when he brought the conversation back to his top issue: "In order to be able to fulfill our role in the world, America must be strong. America must lead. And for that to happen, we have to strengthen our economy here at home." He also scored some points by turning the president's aggressiveness against him, saying that "attacking me is not an agenda."

But while Romney was reduced to saying things like "my strategy is pretty straightforward, which is to go after the bad guys," Mr. Obama was able to point to specific parts of his record. And he was even more effective than his rival in tying foreign policy to domestic issues: "Part of American leadership," he said, "is making sure that we're doing nation building here at home."

The big question, however, is whether any of it mattered. Mr. Obama may have put on the stronger performance on Monday night, but he did not seem to score the sort of dominating victory necessary to significantly shift the polls. Romney's defensive strategy, born in part of necessity, was to avoid taking on significant damage on a topic where Mr. Obama seemed to have an advantage. And by that measure, he seems to have succeeded.