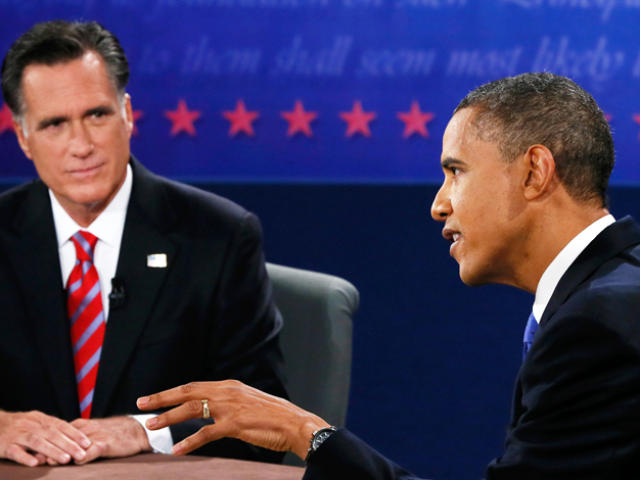 In the third and final debate before the presidential election, President Obama and Mitt Romney exchanged harsh words Monday over how to best guide the nation's foreign policy, attacking each other on experience and vision while attempting to delineate their own differences on issues like Iran and Syria.

In the 90-minute debate at Florida's Lynn University, Mr. Obama was swift to cast Romney as inexperienced and incoherent on foreign policy, lambasting his ideas as "wrong and reckless" within minutes of the debate's kick-off, and taking every possible opportunity to stress the areas in which Romney "agrees" with his policies.

Combating criticism over his actions in Iran, Syria, and across the Middle East, Mr. Obama painted a stark contrast between the "strong, steady leadership" he said he offered, versus what he cast as Romney's "wrong and reckless leadership that is all over the map."

"Every time you've offered an opinion, you've been wrong," the president argued, seizing on his opponent's past positions on Iraq and Afghanistan. "You said that we should still have troops in Iraq to this day. You indicated that we shouldn't be passing nuclear treaties with Russia despite the fact that 71 senators, Democrats and Republicans, voted for it. You said that, first, we should not have a timeline in Afghanistan. Then you said we should. Now you say maybe or it depends, which means not only were you wrong, but you were also confusing in sending mixed messages both to our troops and our allies."

Underscoring his rival's dearth of experience in the foreign policy arena, Mr. Obama sought to cast doubt on Romney's understanding of basic foreign policy principles -- including "how our military works" -- and cast his ideas as regressive and outdated. "The 1980s, they're now calling to ask for their foreign policy back because, you know, the Cold War's been over for 20 years," he said at one point.

"I think Governor Romney maybe hasn't spent enough time looking at how our military works," he said, addressing the former Massachusetts governor's comments about impending cuts to the defense budget. "You mentioned the Navy, for example, and that we have fewer ships than we did in 1916. Well, Governor, we also have fewer horses and bayonets, because the nature of our military's changed. We have these things called aircraft carriers, where planes land on them. We have these ships that go underwater, nuclear submarines."

"The question is not a game of Battleship, where we're counting ships," he added.

Romney, striking a considerably less hawkish tone than in past appearances, cast Mr. Obama's leadership abroad as weak and ineffective, and accused him of using personal attacks to divert from the substantive issues at hand.

"Attacking me is not an agenda. Attacking me is not talking about how we're going to deal with the challenges that exist in the Middle East, and take advantage of the opportunity there, and stem the tide of this violence," Romney said.

Opting not to press the president over the timeline with which his administration responded to recent attacks in Libya, which has been a source of confusion and controversy over the last several weeks, Romney instead elected to launch a broader attack on Mr. Obama's vision for the Middle East and his response to the so-called Arab Spring.

"We can't kill our way out of this mess," Romney said, before calling for a "comprehensive and robust strategy" to help "the world of Islam and other parts of the world reject this radical violent extremism."

"With the Arab Spring, came a great deal of hope that there would be a change towards more moderation, and opportunity for greater participation on the part of women in public life, and in economic life in the Middle East," Romney said. "But instead, we've seen in nation after nation, a number of disturbing events. Of course we see in Syria, 30,000 civilians having been killed by the military there. We see in -- in Libya, an attack apparently by, I think we know now, by terrorists of some kind against -- against our people there, four people dead."

Returning repeatedly to Iran, Romney argued that the nation is "four years closer to a nuclear weapon" and that Mr. Obama has "wasted" the last four years because "they continue to be able to spin these centrifuges and get that much closer." He also said that, if president, he would "make sure that [Iranian President Mahmoud] Ahmadinejad is indicted under the Genocide Convention."

The president defended his actions in Iran, touting the sanctions his administration has imposed there as effectively bringing the nation to its "weakest point economically, strategically, militarily than in many years," and vowing to  "continue to keep the pressure on to make sure that they do not get a nuclear weapon."

"That's in America's national interest and that will be the case so long as I'm president," he said.

Asked for a strategy to curb ongoing violence in Syria, Romney accused the president of punting responsibility to the United Nations, and said the U.S. should promote a policy that would "identify responsible parties within Syria, organize them, bring them together in a -- in a form of -- if not government, a form of -- of -- of council that can take the lead in Syria. And then make sure they have the arms necessary to defend themselves."

Mr. Obama, however, argued that while what is "taking place in Syria is heartbreaking," the U.S. should not be premature in arming Syrian rebels.

"We also have to recognize that, you know, for us to get more entangled militarily in Syria is a serious step, and we have to do so making absolutely certain that we know who we are helping; that we're not putting arms in the hands of folks who eventually could turn them against us or allies in the region," he said. "We are playing the leadership role. We organized the friends of Syria. We are mobilizing humanitarian support, and support for the opposition. And we are making sure that those we help are those who will be friends of ours in the long term and friends of our allies in the region over the long term."

He also defended his record on Iraq and Afghanistan, and argued that drawing down the wars there allowed him to refocus the administration's attention on "who actually killed us on 9/11." Later, he delivered a personal anecdote about what the death for Osama bin Laden meant to a 9/11 victim's daughter, while reminding voters of a 2008 quote in which Romney said he wouldn't want to "move heaven and earth to get" Osama bin Laden.

Romney, who congratulated the president for "taking out" bin Laden early on in the debate, also agreed with the president on his administration's use of drone strikes, and said "we should use any and all means necessary to take out people who pose a threat to us and our friends around the world."

Both candidates seized on any opportunity to discuss their domestic policy issues, circling back to the economy, taxes and education at any available turn. Mr. Obama invoked Romney's 2008 opposition to bailing out the auto industry and reiterated his accusation that "the math doesn't work" for his economic proposal; Romney, meanwhile, touted his record on education during his tenure as Massachusetts governor.

The debate, at Lynn University in Boca Raton, Fla., was divided into six 15-minute segments. According to an instant polltaken immediately following its conclusion, Mr. Obama scored a clear two-to-one victory against  Romney, with 53 percent of respondents giving the debate to the president and just 23 percent calling it a win for Romney. Another 24 percent felt the debate was a tie.

On U.S. policy toward China, a frequent Romney discussion point on the campaign trail, the two candidates are even at 44 percent. On Israel, Romney has an edge over the president, with 46 percent to Mr. Obama's 42 percent.